Woke up to the sun at 7, but no worries, this is late summer, so the weather is cool (15C) and a slight breeze, it could be worse, much worse. It's Sunday morning,and Punta Arenas city is sleeping, we have breakfast and find a Santander ATM and get on the Bus Sur. This is not difficult, PA is a pragmatic service city; there really isn't any other city between here and, oh, the South Pole of this particular planet. 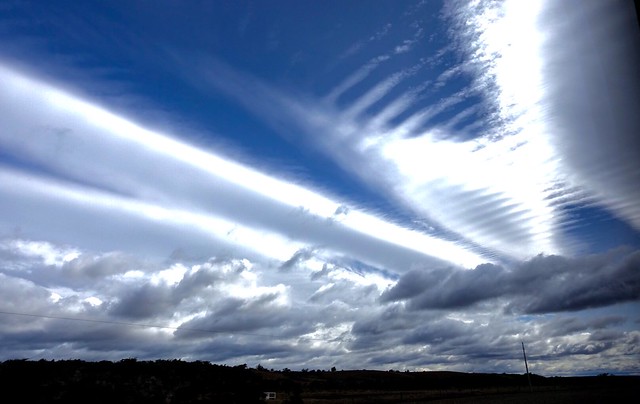 The 10am bus departs north, across the odd unglaciated shelved terrain covered with nothofagus scrub, we spot some rheas and guanacos straight away, and plenty of sheep--Chris can't help himself but say "Daaaaan" and I wearily smile, then nap. I look at Google Maps, and once again am confounded by distance--South America is such a distinct shape, its southern cone must be really sharp at this point--but no, it's not, we're headed a couple of hundred miles north, distance is not that easy, but easier now: the road we're on is not the half-paved road of 1999 we last drove on, but a fully concreted road in both directions, without even the benefit of PELIGROSO signs, it's that modern. Sigh, where's the adventura?

We pass Estancia Rio Penitentie, where we slept and dined last time as the only guests--that place was an odd time-warp back to the 1900s, we dined in slightly updated Victorian rooms and slept upstairs where the shearers stayed in season. It was a place where Scottish sheep ranchers decided This Is The Place, where those ranchers are buried under stones that say "MacKenzie", though their descendants are not first-named Robert but Eduardo.

Coming into Puerto Natales was interesting--it just seems so much bigger. The four land boulevard into town didn't quite connect, but there was one of the splashy "MEJOR CHILE/OBRAS PUBLICA" billboards that said it would soon. I like those billboards, even though I'm a foreigner I trust that Chile's government, particularly under President Bachelet, is doing the right thing, even if that it getting a little bit boring for the aspirational classes. I could see her becoming the UN Secretary General in a few years.

But this was not to be--someone had called the carbineros that there was someone or thing naughty on the bus, so we were stopped at a checkpoint about 12km before Natales, where the cop really didn't like the five backpackers that we picked up at the airport that were sitting on the floor--the did not have their seat belts on, duh, so after an hour of security kabuki and the mandatory Chilean receipts-in-triplicate, we finally got to Puerto Natales to transfer to yet another bus to take us to the park.

The new bus station looked great, yet was already was over-capacity. Backpackers were lying about on the floor, speaking Spanish and German and French and English. Ticket counters were tiny and crowded, the toilets were ridiculously undersized (two urinals in the men's room? Really?), though we didn't have time to linger; with the copstop we had 10 minutes. We found our bus and got on.

The bus, however, was not having us--some 30km out of town, at the top of the hill, the driver didn't like the grumbly sound of the engine, so he pulled off the side of the road once, then twice, grrrr... And another bus pulled up and we changed over to that one for the final ride to Torres del Paine.

Already we could see change , just getting to the park: the road was paved in large portions, the large number of busses on he road... This isn't the quiet remote park we visited 17 years ago. The secret is out.

The bus stopped at the Administration center, which just didn't exist last time; we drove through. This time, we waited for ten minutes, then a norteamericana park ranger hopped on board and explained the drill: fill out your entrance permit at station 1, pay your $18,000 peso fee at station 2, get your permit de camping at station 3, watch the video at station 4. Leave your luggage on the bus, get it after the video, then get on your catamaran or shuttle to your final park destination. Geebus, so much yoga pants.

We did all that, got on the shuttle, got to Torres Central, a moderate sized Habitrail with a bar and food and blissfully no reggae, a shared room with six bunks and bathroom down the hall, and far too many trekkers with 20 kilo backpacks and heavy Nalgene canteens and Crocs and Antarctic parkas and yoga mats (as sleeping pads? IDK). 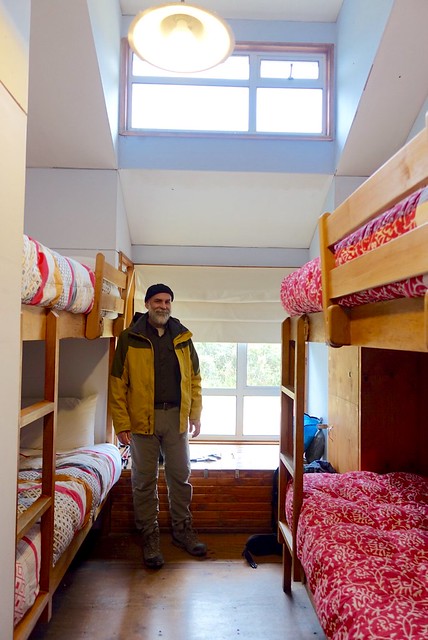 < To Punta Arenas To Refugio Dickson >