dan.marmot.net
< To Old Station To Burney >

I woke up at 4:20am. Hm, shouldn't Junior be up? And Sage? Nope. They were sound asleep. I decided I'd just pack up and wait for them, I don't want to be hiking in the middle of the day. They woke up pretty quickly. 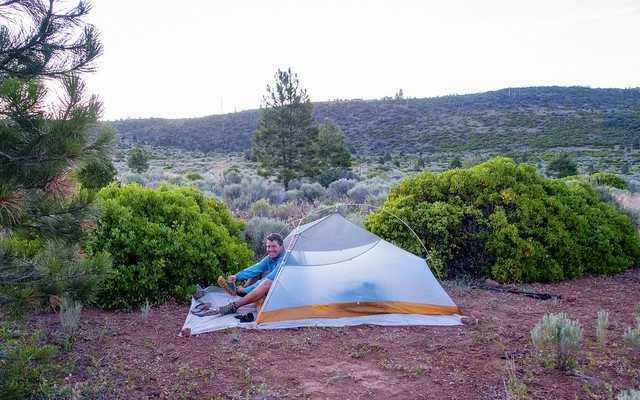 I drank some water--avoiding my morning coffee, sadly, I don't want the caffeine to dehydrate me--and by 5:15am we all were ready to go, and it was light enough to walk without headlamps. 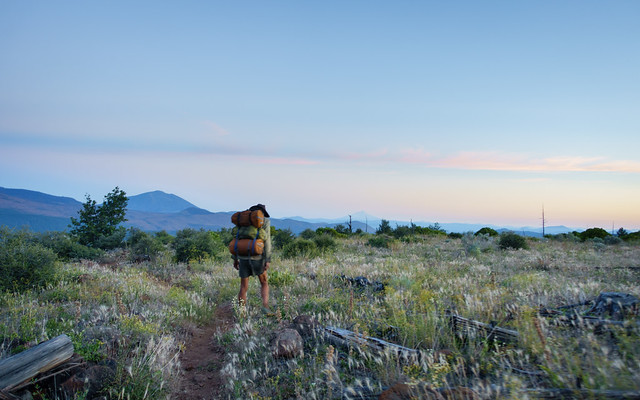 The trail, just as I found it last night, was rocky and overgrown, with yellow star thistle poking at my bare legs and the dry grass seedheads burrowing through the mesh of my shoes and into my socks after just a few hundred yards. At least it's a nice cool 60 degrees out, very pleasant, and Sage and I made it the few miles to the Lost Creek water source without much hassle--Junior followed closely behind. 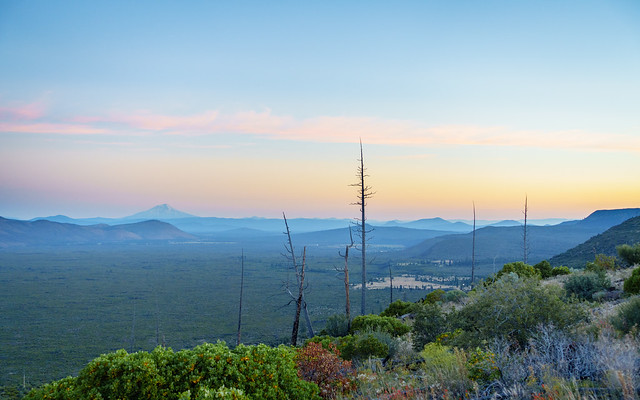 That Lost Creek water is kinda mysterious. Halfmile has it marked as "1/3rd mile off trail but a long way down", someone on the PCT Water Report had reported it as "Excellent water, 5 minutes down/10 up". One of them is correct, and it was Halfmile. We left our packs at the top, and walked down. It was 10 minutes walk down a very steep trail, then awhile at the bottom to dig through the willows to get at the water and filter it, then 12 minutes back up to the top. Just about a 45 minute detour, but we had six liters for the 21 miles of trail. I waited at the top and talked with a southbound hiker who had just woken up and was camped at the trail junction, Minh. He said that there was plenty of water, "30 gallons or more", at Cache 22 ahead, and there was plenty of shade after the lookout to rest in during the heat of the day. Sounds good... Junior and Sage came back, and we headed down the trail.

That trail was just hot and unappealing, best described as lava scrub. There was a little bit of forest at first, but after that there was none, though if you crouch in the shade of the oak scrub you might be able to hide from the sun and not the heat--and there wasn't even any breeze, so it was just still and hot and dusty. At least the trail after the lookout was pretty well maintained, which was a bit of a relief. Sage and I hung back with Junior far ahead; the two of us stopped at an old lookout for ten minutes to rest, then headed on towards the cache where we found Junior. There were some wildflowers to hold my passing interesting. 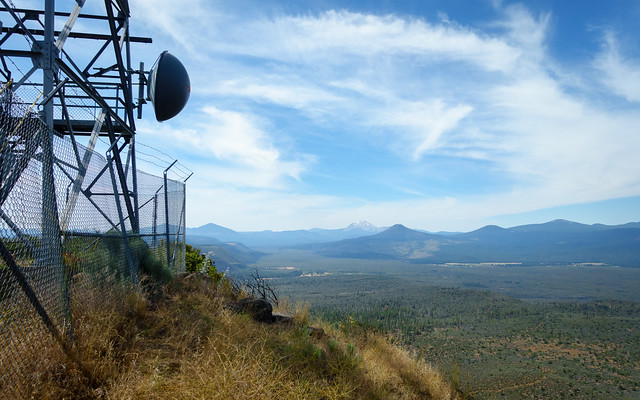 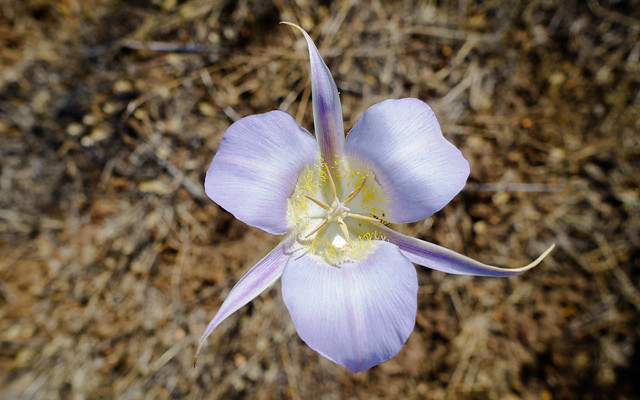 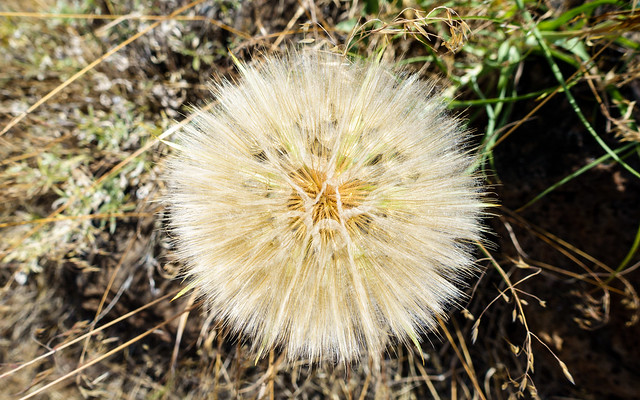 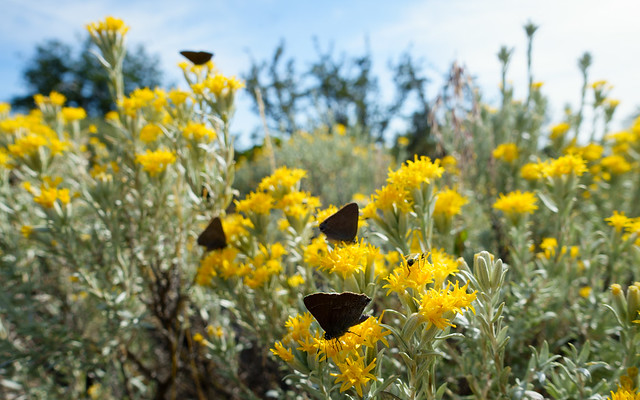 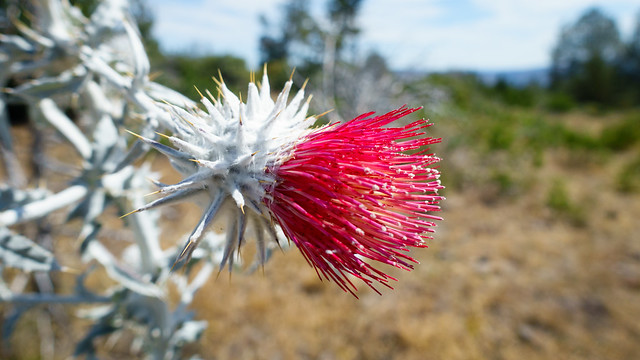 It was 11:15, and 98 degrees--no weather to hike in. The cache was great, a shady rest spot with maybe 40 gallons of Crystal Geyser water and three plastic chairs, one for each of us, woo. 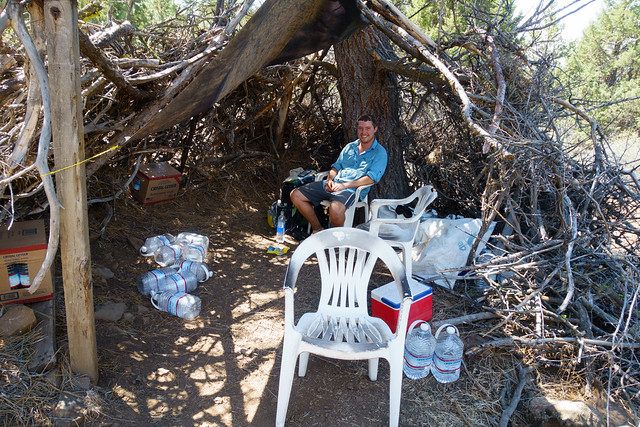 So we hung out in the shade for several hours, drinking our water and a bit of the cache water. Ixnay came by and chatted for awhile, then left around 2. He was really eager to get to his resupply box at Burney Falls State Park.

At 3:15, we all decided it wasn't going to get any cooler, so we headed out into the heat. I made sure the temperature sensor was in the shade, yet it was still reading 98 to 100 degrees, yikes, and we all agreed to walk to the first camp six miles ahead and meet up. Junior and I went ahead. I was feeling OK, but sweating pretty profusely, and we all wanted to wet camp tonight next to whatever water we could find--the Crystal Lake Fish Hatchery sounded great, with a stream right before it.

That trail from Cache 22 on down was more interesting, wandering down off the rim to an odd savannah like plain, past a disgusting looking pond for cattle, then along yet another part of the rim to head even lower (and hotter) in elevation. 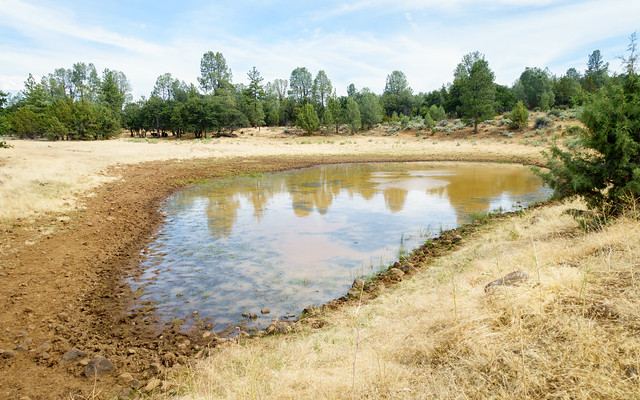 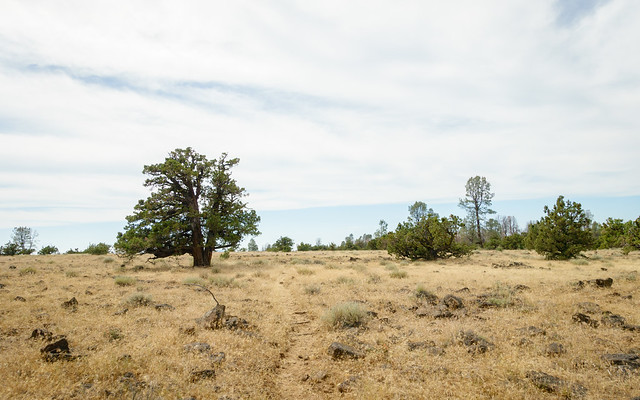 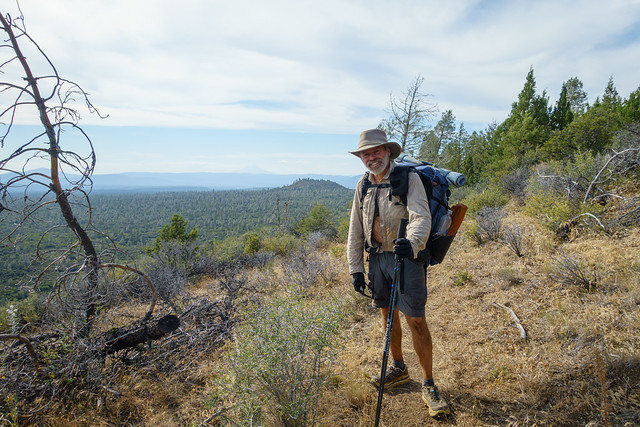 Just before the campsite, the trail went across several hundred yards of lava chunks, which gave me shivers as I walked over them, the rocks screeching as I stepped on them like fingernails on a chalkboard. Junior and I waited in the shade of a juniper tree for Sage... who said "Hi guys" then kept on going. We all were in not much mood for talking. Just get it done. 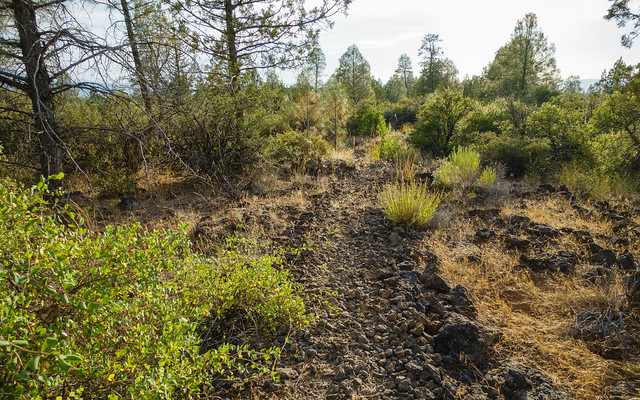 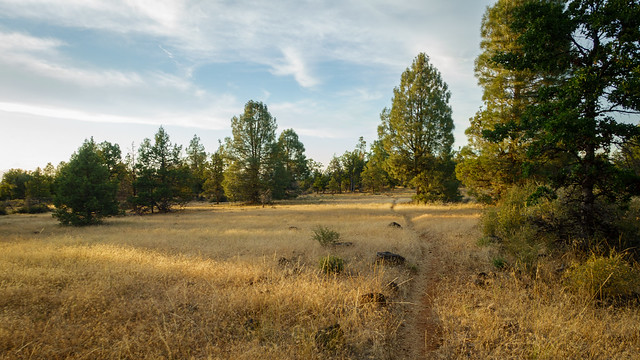 The trail meandered along a powerline, annoyingly, next to a paved road. I seriously considered just following the road or the powerline track, rather than the half-again-as-long PCT routing, but felt that might be a bit cheaty. Junior and I almost caught up with Sage as we crossed more savannah-like fields, with the oak trees creeping into the Coulter pines. The heat and open space and dust and light reminded me a lot of southern Africa; it didn't take much imagination on my part to see impala herds and elephants in this landscape.

Anyways, the PCT started heading down off the rim towards a lake we could see in the distance, Baum Lake, and the trees changed suddenly into a blue oak woodland, much like the Sierra foothills. At 9pm we caught up with Sage, who had stopped beside a 2 foot tall metal pipe with water spewing from it at high pressure in a couple locations, some sort of aquaduct, in a green meadow. We walked a hundred yards further and found a flowing creek and a decent enough place for three tents, and called it a night. Once again, I was too tired to do much but eat a Clif bar. Ah well, that's fine. 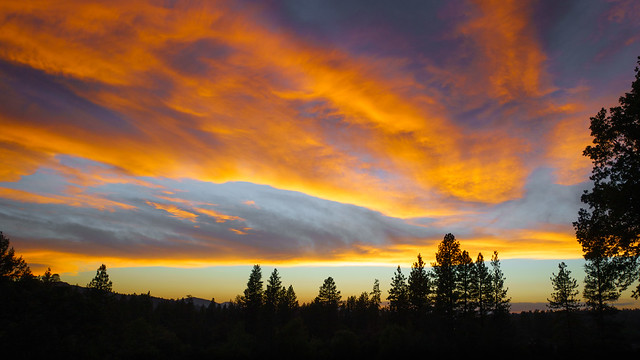 Sunset after a hot day 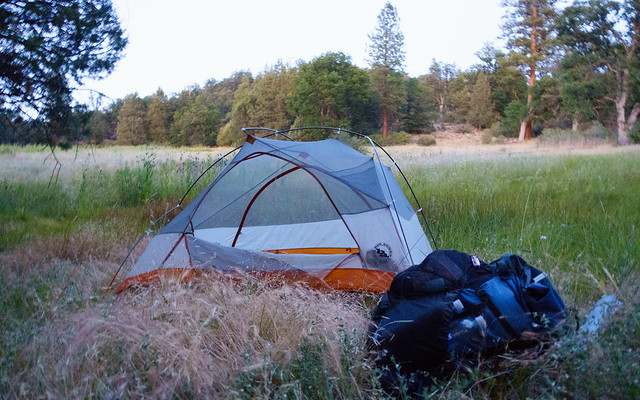 Tomorrow is a short day, then a town day, and then an actual rest day. I haven't had an actual day of no hiking in a month, and I definitely need a rest day or two. Today was definitely the toughest day on the trail. I really don't have much energy left, and frankly am not looking forward to more 20+ mile days in 90+ degree heat. The weather forecast says that's what's ahead though, and that doesn't excite me much at all.

< To Old Station To Burney >