I had inadvertently positioned my tent last night right in the path of the rising sun. A month ago with the below freezing temperatures, that would've been very welcome, but now the sun was just blazing on me, and I said "ok, time to go!" The other guyses tents were all shady and cool. I didn't feel like doing anything else but just getting going--this campsite in the burned area with the fine volcanic ash was fine for a single night, but nothing to linger over. 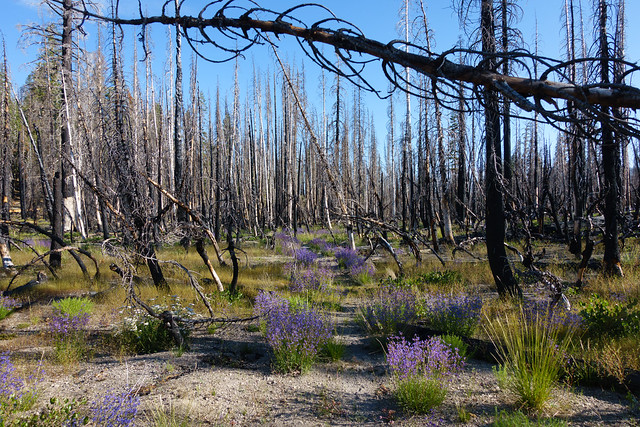 The trail from Cluster Lake down to the PCT was fairly overgrown with a few toppled burnt trunks blocking the trail, but fortunately those were easy to scoot around with the lack of undergrowth. I took the lead, and sometimes ended up following the drainage channels off the waterbars across the trail, but it was generally an easy path down to the PCT. 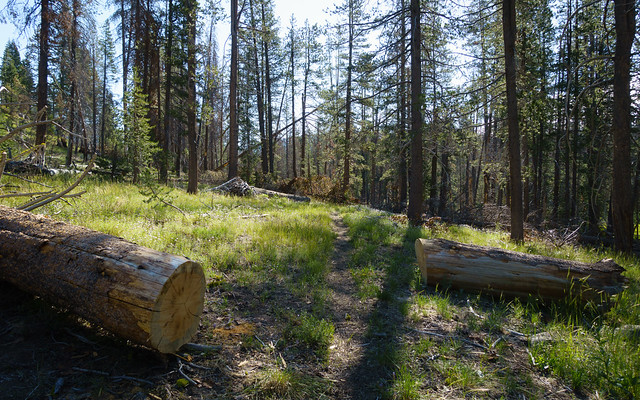 Once back on the PCT, the trail went along the north border of Lassen Volcanic National Park, and left the burnt area, heading west through a wonderful parklike setting of pondorosa right around 6000 feet elevation. It was cool but not cold, and we were making excellent time as we left the park, signing the register as we departed. 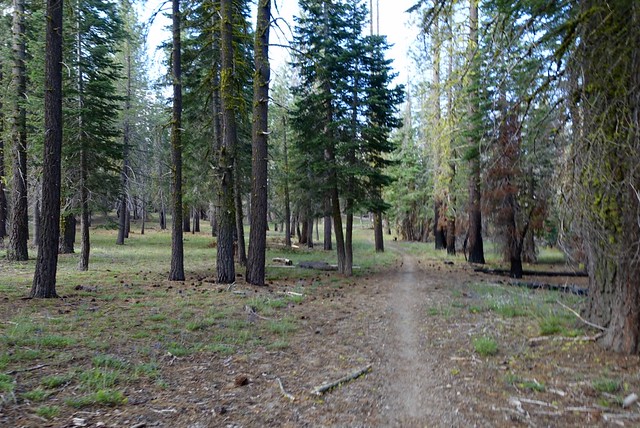 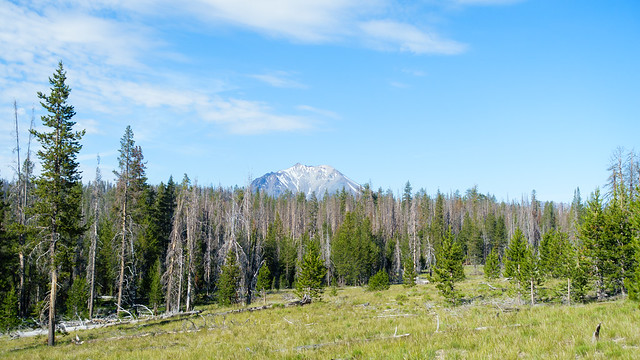 I had half-expected the terrain to change dramatically to lava fields and manzanita with only the occasional pine tree, but it didn't get that stark. As often is the case on the PCT, the scenery changed to chunky basalt, and the trail wound down into a fairly wooded and broad valley, then meandered through an odd plantation of Jeffery pines for a few miles. That was a bit weird, with the pine trees all in rows and the head-high manzanita blocking any views. It felt like we were in a bit of a rat maze for an hour or more, then the trail crossed a fire break into pretty open native forest a bit before the next water source at Hat Creek. 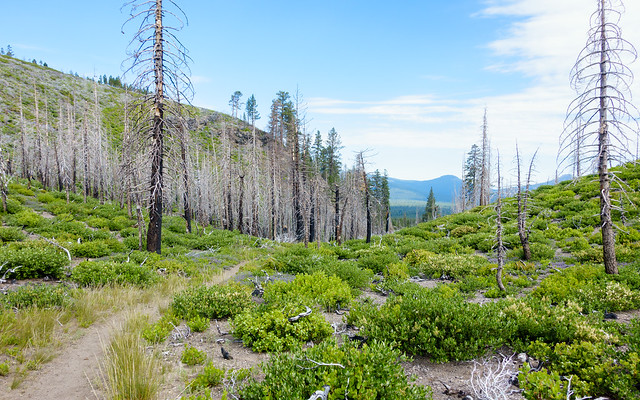 Down towards Hat Creek 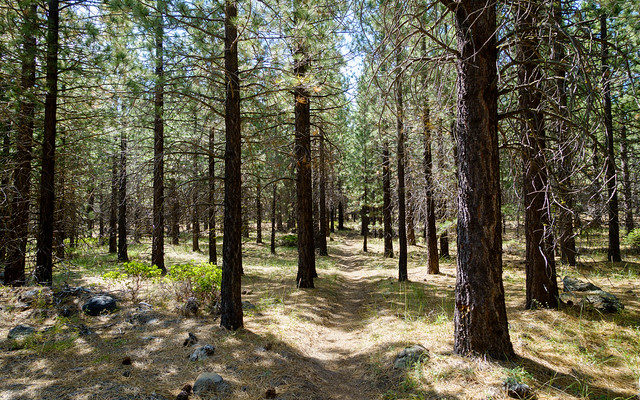 Through the pine plantation

Hat Creek was flowing well, and we stopped and washed off all that dust and ash from our feet and took a long break; we'd been hiking for four hours without any stops. As we descended in elevation it was getting warmer and warmer, and I was feeling a bit nauseated, so I drank a lot of water and made one of those electrolyte drinks from the Camelbak Elixir tablets I still had. Then back on the trail--only four miles to Hat Creek and the post office and market and deli and ice cream! Those four miles were super-easy, almost all flat to downhill, with a little bump up to get over some hill of basalt. We arrived at Hat Creek just around 1pm. 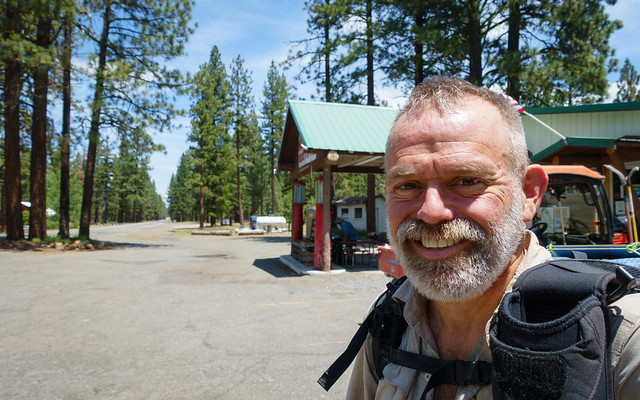 Old Station in the heat

Sage got a box at the post office, and Junior and I got ice cream and cold water and sat out front. The deli was closed, so no sandwiches (grrrr), and the two counter staff were grumpy and unfriendly. The store was kind of lame too, not much food to eat, no SmartWater bottles, not even any soda bottles larger than 20 ounces, probably so you'd buy more of them rather than buy the 2 liter bottle of Coke. They didn't even have Pop-Tarts, which every camper and hiker loves: instead they had the lame consolotion prize of Toast 'Ems, a brand I thought hadn't survived past 1990. I got some M&M's as well as the ice cream, and chowed another Clif bar; I wasn't about ready to have Doritos and Sprite for lunch. We sat out front on the benches The temperature had climbed up to 100 to 103--not hiking weather at all--but there was a nice breeze so it didn't feel quite that hot. There was also wifi (the woman behind the counter begrudgingly admitted we could get the signal if we walked around the corner towards the motel rooms), and we caught up on email and looked at the weather.

The weather forecast was strange: the National Weather Service was predicting 90 to 100 degrees for Old Station with slight to moderate chances of afternoon thunderstorms for the next week, and they admitted in the forecast discussion that their models really didn't have a good handle on this type of weather pattern so they broadbrushed the forecast. Redding, though, had a forecast of 112 degrees. Hm, it's at a pretty low elevation, but doesn't that mean up here it'll be hot too?

I wandered to the tiny post office next door simply because I heard their air conditioner working, and it was wonderfully cool inside with two friendly women behind the counter. We had a good chat, I browsed their paperback book exchange shelf but didn't see anything compelling. There was also a box full of romance novels that look promisingly trashy, and almost picked one up, but then thought the better of it. When am I going to read that? I hike 11 to 12 hours a day, including breaks, then I make camp, make dinner and write, sleep, make breakfast, and hike again. I hardly have time to write this blog, let alone get inside the head of some romance starved woman.

We left Old Station around 3:30 and walked a few more miles over to Subway Cave. 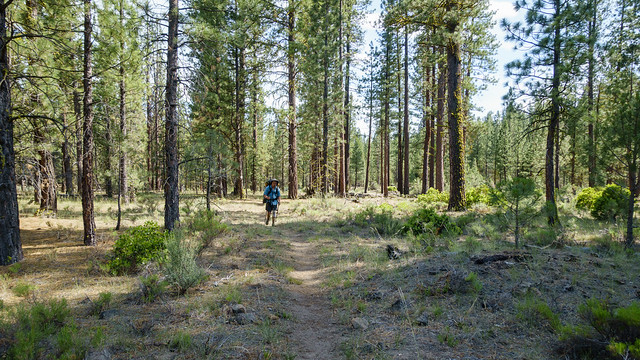 Junior along the trail

Subway Cave is the last water before the start of Hat Creek Rim and we planned to fill up and hang out until early evening then hike up to the rim and camp overnight. The picnic tables were hot yet shady, and right next to the water spigot and two trash cans, so we spent a long while there, eating a bit and drinking lots of water (cameling up, a term that is accurate but I find more smarmy than clever). I planned on leaving with six liters of water to get me through the 29 miles, and topping up at Lost Creek Spring about 8 miles in. 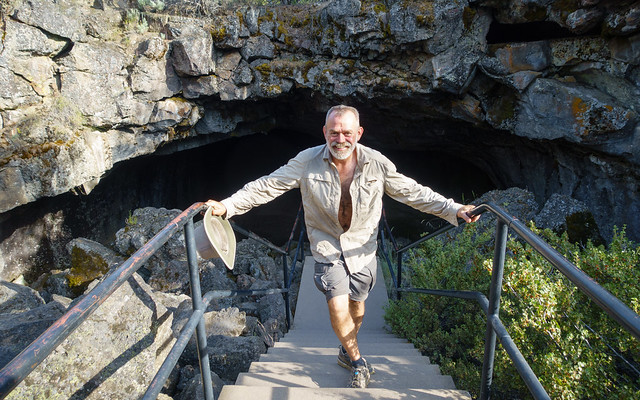 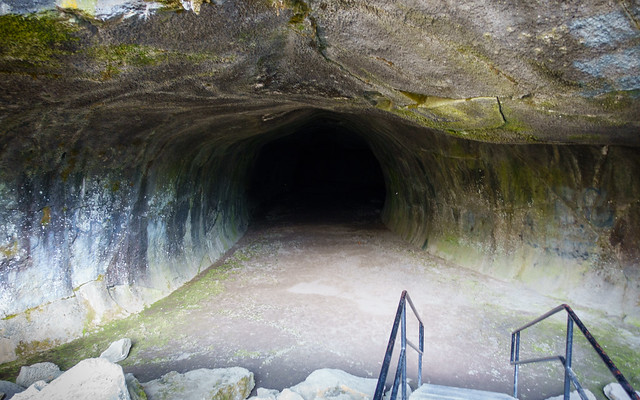 Subway Cave was a place I've been before too-- I remember visiting this cave with Chris many years ago (maybe 1995?) and taking a picture in the cave and wanted to get a similar picture. It's a long and wide lava tube, about 1/3rd of a mile long, nice and cool at 46 degrees inside. Ixnay had shown up and was hanging out, so he agreed to watch our packs, and we explored the wonderfully cool cave. It was a nice little break from the heat, with all my sweat chilling me down and giving me goosebumps. 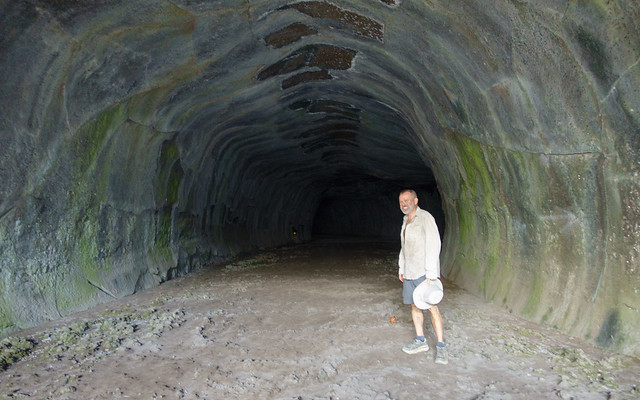 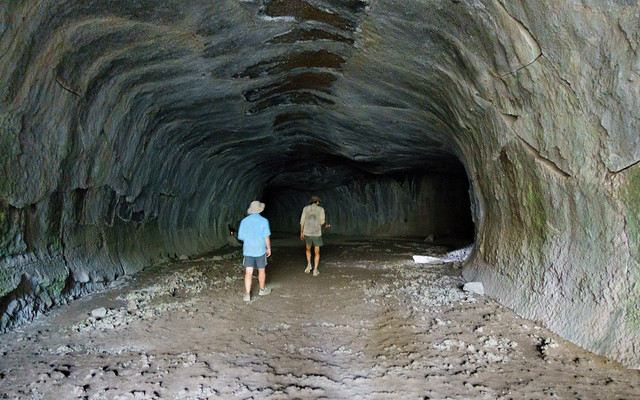 After the cave tour it was getting to be 7 or so, and the heat was subsiding a bit, so we started up the trail.

The PCT from Subway Cave climbs up an old roadbed to the Hat Creek Rim Overlook, a climb that went quickly through dense stands of blue pentstemon that were wonderfully backlit in the setting sun. The overlook has been recently renovated with nice picnic tables, and from the overlook we got our first sighting of Mt Shasta far to the west; the trail goes just south of that big volcano, which is just a bit shorter than Mt Rainier. I wondered why Mt Shasta isn't a national park as well, it seems odd that it's just Forest Service land. Maybe there's some tribal issues, or timber interests? Who knows. 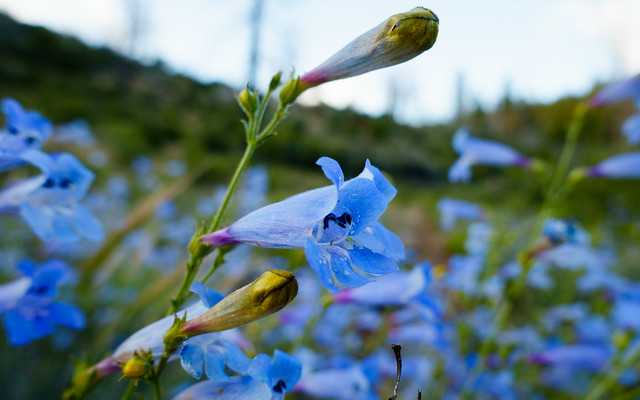 The setting sun was really nice from that overlook, but what was really nicer was the strong AT&T cell phone signal--primarily because Sage's shoes were really not cutting it, so I used my REI account to get him some Altra Olympus shoes shipped to Burney. Hopefully that should make things better for his tired feet. 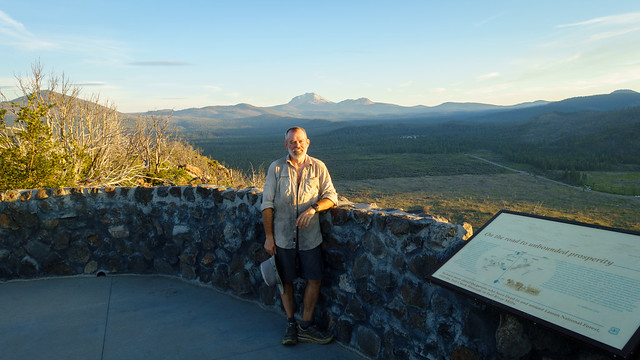 Me and Mt Lassen 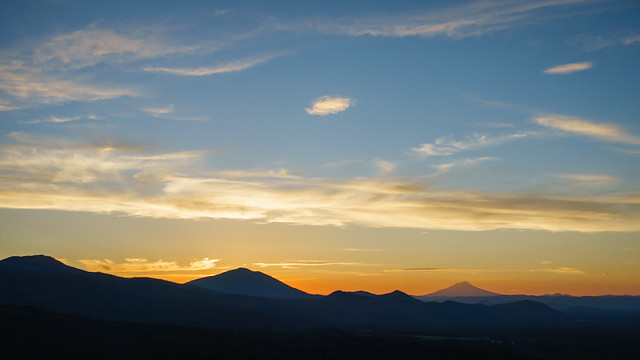 We hung out for half an hour at that overlook, watching the sun set and the full moon rise, then set out along the rim in the fading light. The moon was bright, but low in the sky and as helpful as I had hoped: the trail was moderately overgrown with scratchy bushes, and rocky underneath as well with loose chunks of basalt. Again, I was in the lead, and switched my headlamp on early, but even then I stumbled a fair bit. After a few miles I really was having problems concentrating on the trail, getting that tunnel vision where you see ghostly things in your peripheral vision that aren't there, and I was also starting to feel a bit of vertigo and knew we weren't going to make it the five or so miles to the first listed Halfmile campsite. I was startled and a bit scared by this loud hacking noise just off the trail in the darkness--a weird grouse?--and shined my headlamp towards it but couldn't make anything out. The guys behind me spotted the culprit, a deer violently vomiting up, and laughed it off, but I was more irritated. Finally I said "enough, let's find a space" and Sage found a decent enough spot just off the trail around 10:15. 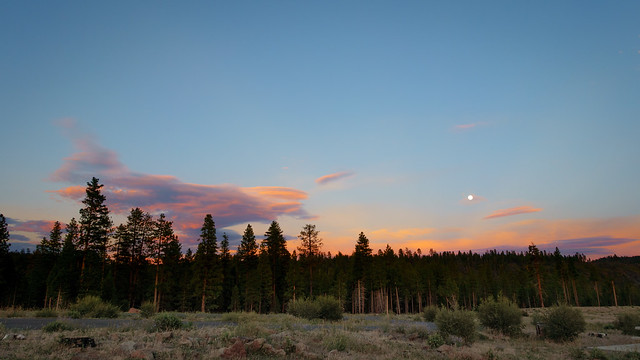 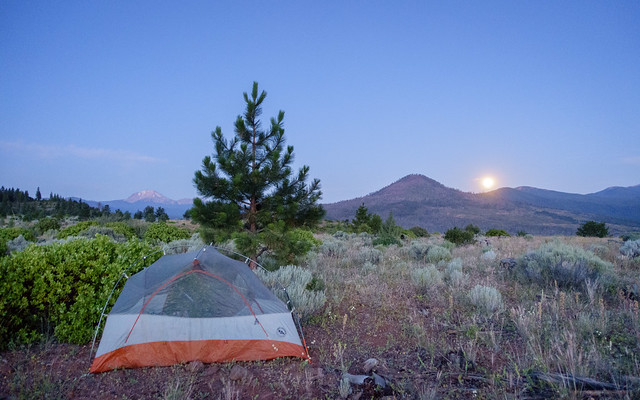 I put up my tent and was just too tired to make dinner, so I ate yet another Clif bar. I'm a bit worried that I've lost my appetite in this heat, but a hot meal when it's 85 degrees out just doesn't sound appetizing. We discussed when we were going to get up and agreed that we'd get up at 4 and be on the trail at 5. I can do that, and it's just about the only way to do that hot Hat Creek Rim section. We can hike a bit, rest, then hike a bit more, then rest. Take it easy, and we'll make it the remaining 24 waterless miles. It's going to be a tough day tomorrow.