We all enjoyed the campfire a little too much--the bottle of Jack made its way over to me three times--and I didn't really get to sleep until 11. The sun rose this morning at its usual time, which meant that I got about six hours sleep. That's actually fine, for some reason I don't feel the need to sleep in out here on the PCT.

Pasta said he loves sleeping in and gets going at 10--far too late for me--so I said my goodbyes last night and got on the trail at 8. First up was Benson Pass, an 'easy' pass just six miles away; and it took me four hours to do those six miles. 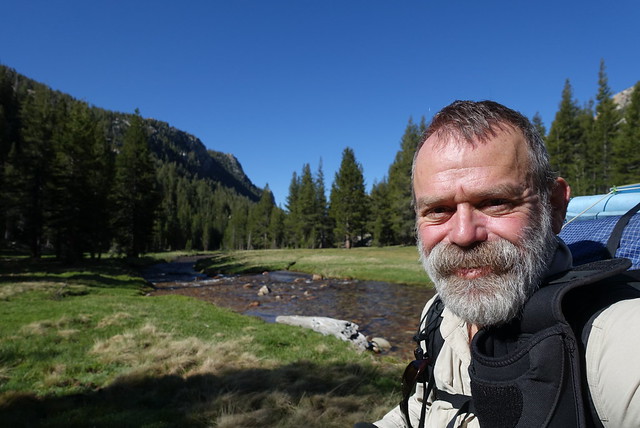 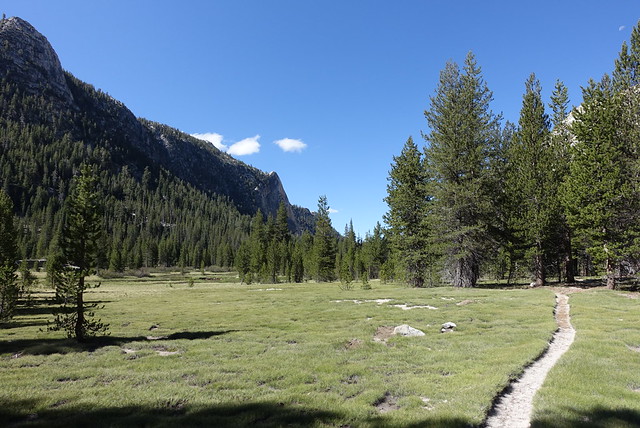 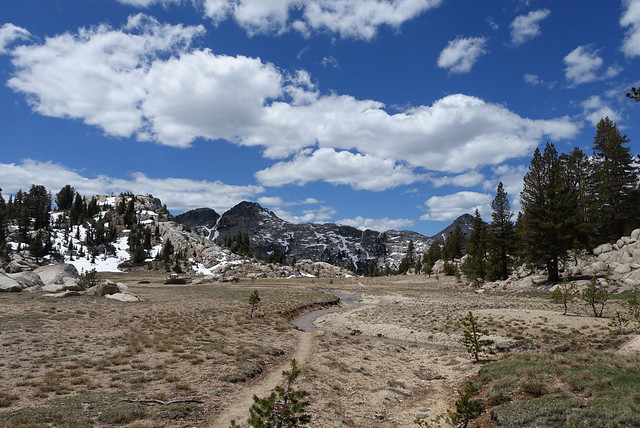 Maybe I just didn't pay attention to the topo maps, but those were difficult miles. The trail seemed to either be going up or down, no level spots, and this being Yosemite the trail often had stone steps or was a blasted-out-of-granite tread, and the recent rains and snows made a lot of the trail and rocks slick with dust and water and mud. You really had to watch your step.

The creek fords didn't help much either; each was just wide enough to worry about. I took off my shoes for the first and wore the water shoes, then carefully taped up a tiny blister that I found before heading on. Fording a creek isn't difficult, but it just takes awhile to take off your shoes and socks, wade across, then put them back on.

After Benson Pass the trail went through some pretty high country, then dipped down to a lake that looked great on the maps for a lunch stop, but ended up being a soggy mosquito infested swamp. It had both clouded up completely, and the temperature rose into the mid-70s with no wind, and at 8500 feet elevation it felt strangely oppressive. The mosquitos would find you if you stopped for more than 10 seconds, so it was much much bertter to just keep moving. 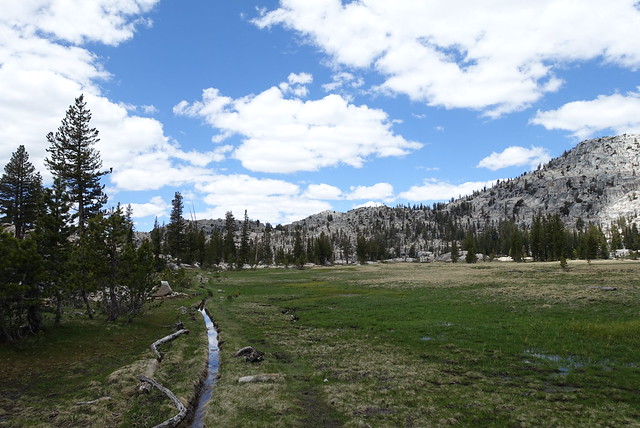 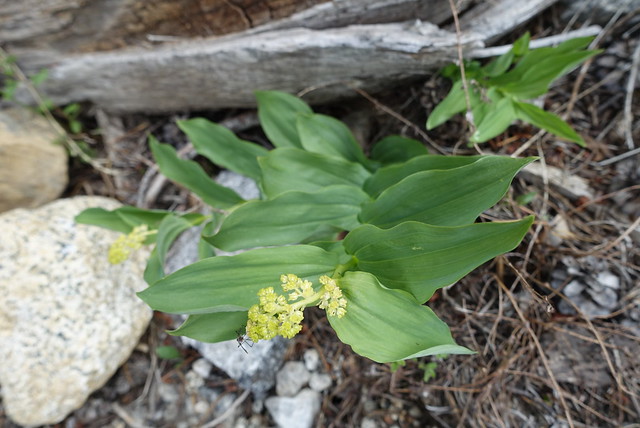 I thought the trail just kept on going down the canyon from Benson Pass to Benson Lake--that would make sense right? Yes, but that's not what the trail did. After Mozzie Lake, the trail went up some 500 feet in elevation, hung out there for a very short while, then plunged down to Benson Lake. This was a very hot and dry section of the trail, filled with manazanita and sagebrush and lizards, not what I expected at all. The clouds went away--as the trail headed west, the clouds dissapated--and it got uncomfortably hot. 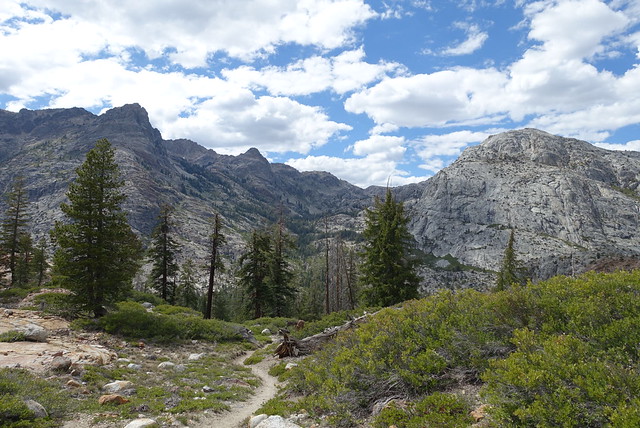 Down into the next canyon 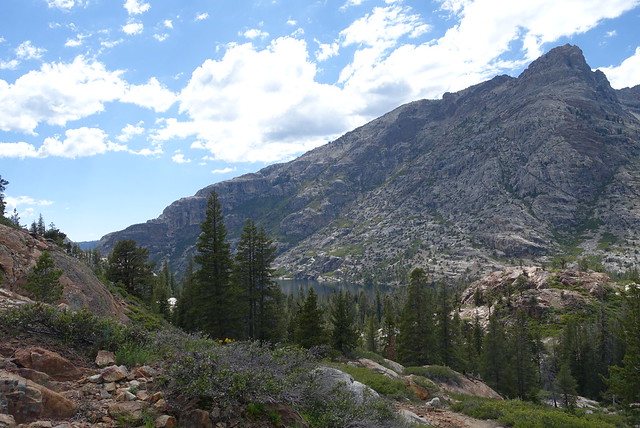 Benson Creek was another ford, then there was yet another 1500 foot climb. This one I didn't mind when I finished, for there was a small lake at the very top of ridge (yeah, a weird place for a lake), with great views and beautiful reflections. That lake felt like it was a planned Japanese garden, but it was all natural. Really beautiful spot. 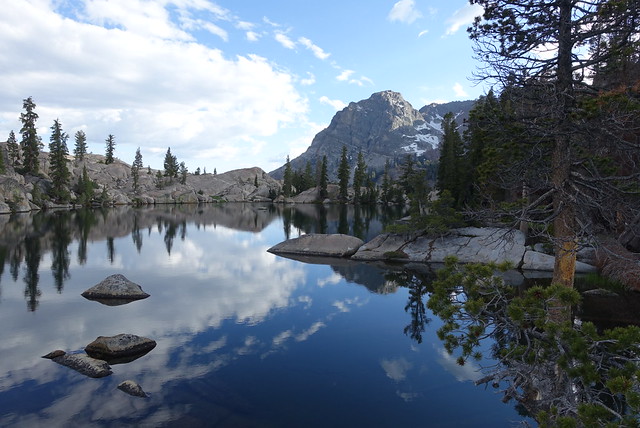 The trail then went down and down, and I was finally able to get some speed. I figured I'd keep going until 8, then find whatever came up, and I camped down around mile 978, just like I had planned--though it was much more work today than I thought I'd do, that's for sure. 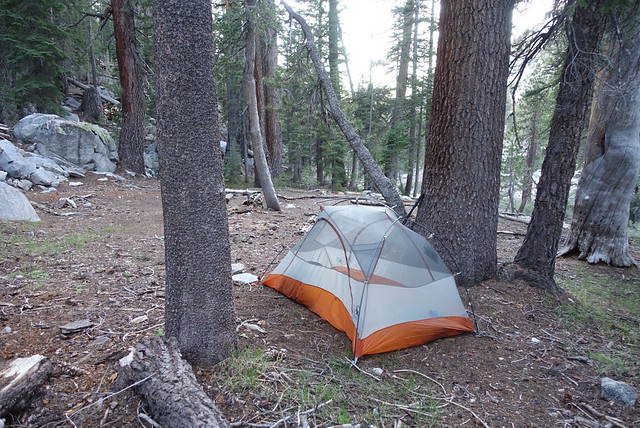 Camp for the night

Tomorrow is another day like today, but you can bet I'll be reading the map before bed tonight. Good night all.