It was a pleasant night--we kept the windows open, the stream just below made a soft rushing sound through the night that let us sleep really well. Of course, it could also be the 25km of mountain walking the day before, but either way we were well rested.

We didn't have such a long walk today, around16km/10 miles. That's maybe 4 hours, even in these mountains, so we decided to explore a little bit of Yunomine around the hotel, then walk the 4km/2 miles over the mountain and back to Hongu, which has a convenience store where we could supply up for the last two days on the trail. 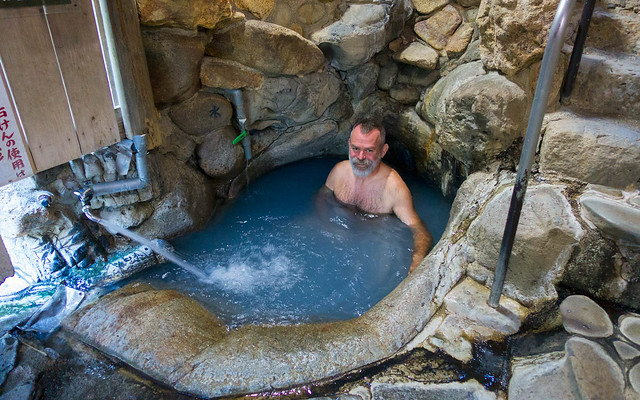 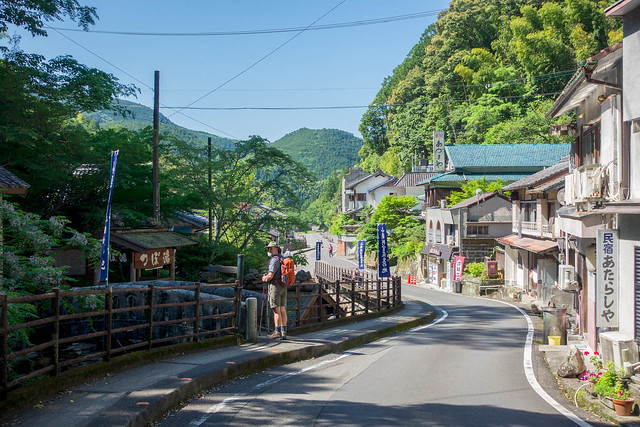 Yunomine, getting back on the trail

Chris had found the ticket machine for the famous hot spring in town, one of the oldest onsens in Japan. It was all of 20 meters below our room, as it turned out, and we both took turns soaking in the extremely hot and sulfury water in the tiny little cabin next to the stream. This hot spring's been used for a thousand years and is known (and venerated) for its healing powers; it's explicitly listed in the UNESCO World Heritage Site declaration.

That's one thing that I've come to appreciate on this trip: seeing some of the origins of why cleanliness is such an important aspect of Japanese culture. You wash your hands and mouth before you enter a shrine. You clean yourself by soaking in a hot bath (but only after washing yourself first!) White is the holy color, seen on the nuns in temples and the white strips of paper around shrines and temples, it's the color of clean. (I did wear white toe socks on the trail one day; I'm sure that broke a half dozen unspoken cultural rules here, but I break a few dozen every day I'm sure as an uncivilized foreigner--but at least I know not to wear clothing in the men's onsen.)

After our boiling in the hot spring, we headed up and over the mountain to Hongu, which was pretty much straight up the mountain then back down the mountain on stone stair steps. We parked our packs at the new visitor center, and Chris wandered into town for snacks. I looked around the visitor center (hey, it's Japan, I can leave my backpack mostly unattended!) and enjoyed the slide show and free wi-fi. Looks like great weather here for the remainder of our walk. 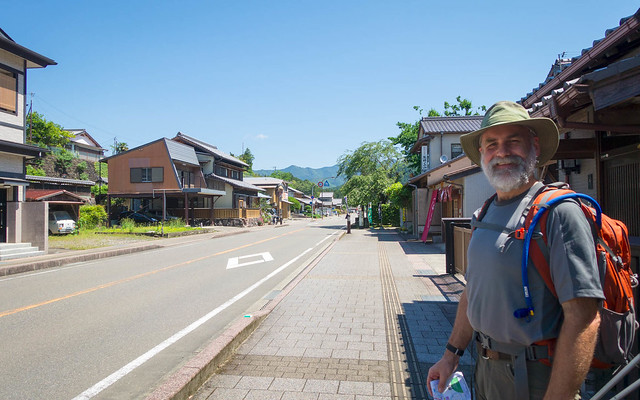 We snacked a bit on curious treats, and I went to throw away the packaging... hm, where's the trash cans? By the bus stop? No. I went inside, no, not there either. So I asked the helpful guy at the desk who spoke decent English where the trash bin was, and if he could throw it away for me. He was a bit shocked, and said "no no no, you take with!" OK, sigh, another rule broken. I dumped the cans in an obvious recycle bin out in front of a shop, which caused the shopkeeper to run out and flutter her hands and admonish me with "No garbage! No garbage!!" Yes, yes, hai hai hai. Later on the trail I thought about why garbage is so special: it's probably other people's dirty unwanted stuff, and you shouldn't touch it! Plus there's probably super-intricate sorting procedures for disposing of various types of material. That would be very Japanese, I don't think this country is inclined to just dump all their trash in some landfill like we do back home.

Chris was also having a curious cultural interchange at the visitor center: while I was looking for some way to get rid of my trash, he was refilling his Camelbak water bladder. He couldn't find a spigot, so he asked a woman at the front desk, who told him to get water bottles at the shops on the main road. So he simply asked "Can I just use the tap water in the toilet sink?" and the woman was horrified that he'd even consider that notion. She finally found an acceptable solution by taking the water bladder back to the staff kitchen and filling it up from the tap there. Ah, much more hygenic water there than the dirty toilet-room water!

Our afternoon hiking was in two sections: the first was an 8km (5 mile) detour on a 'forestry road' to avoid a landslide, then the detour rejoined the Komodo Kodo for another 8km along an undulating ridgeline before descending to Koguchi, where we would spend the night. We caught the bus around noon from the visitor center to a small town just down the river, then walked down the road 10 minutes to the start of the 'forestry road' into the mountains. 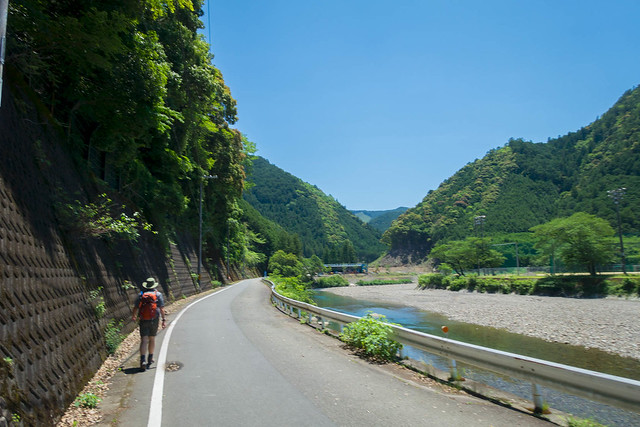 Walking to the forestry road detour

We were expecting, well, a 'forest road', perhaps a two-track hard dirt road through the forest, right? Uh, no, this is Japan--the forest road was a narrow paved road that wound its way up the mountain, where every road-cut hillside were sprayed with concrete like the inside of a swimming pool to prevent rocks from falling, where every stream and water crossing was meticulously channeled under the road, where every blind corner had helpful mirrors to see oncoming traffic, of which there was none in the nearly two hours we ascended on that sunny hot pavement. We passed a few mildly interesting attractions: a mannequin head with a wig on a stick, a strangely quiet angry dog that was straining on its chain to try and attack us, a monkey trap baited with a grapefruit, but mostly the road was just hot and just something to get done with as quickly as we could. 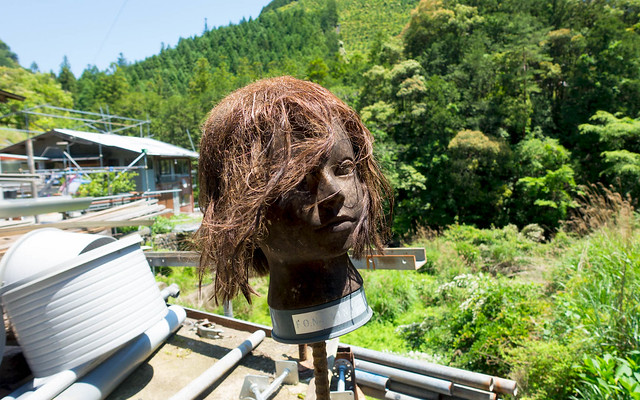 Head on a stick 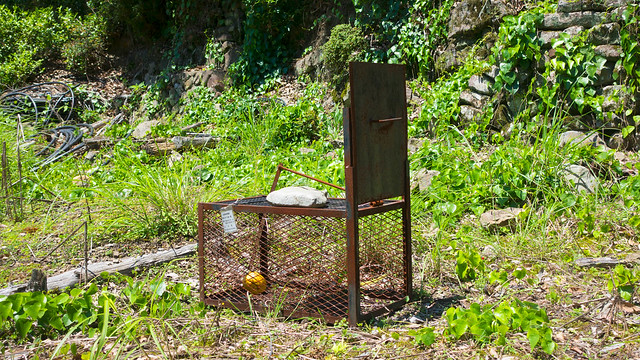 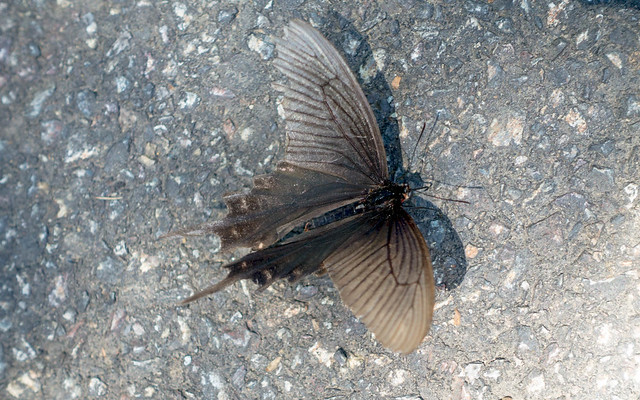 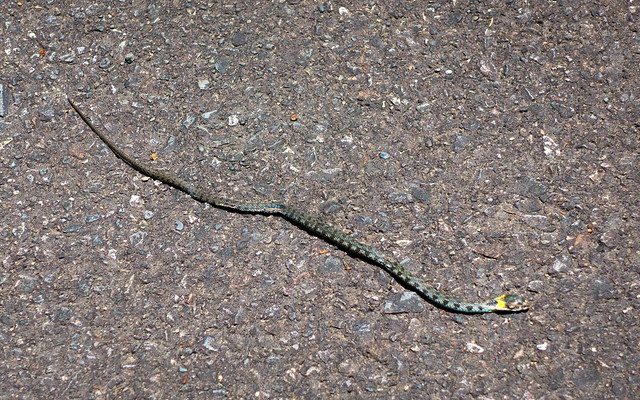 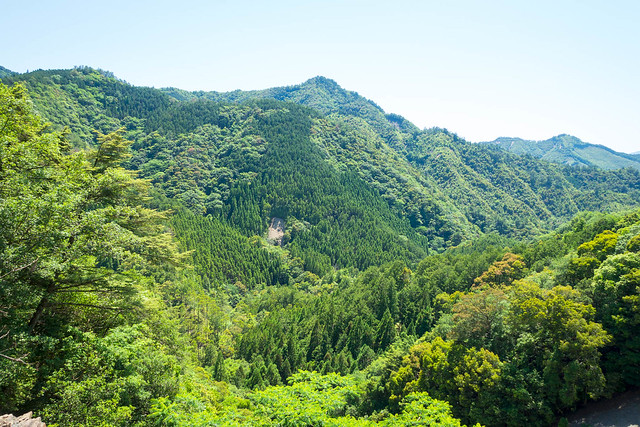 At the top of the road and the end of the detour was a new outhouse, with a solar powered Western-style toilet that I took advantage of. I tried to decipher the status panel above the toilet, with orange and red and green LEDs, but it didn't make much sense. After I finished my business the outhouse whirred and clunked and started to do its business of carefully processing and disposing of my waste. 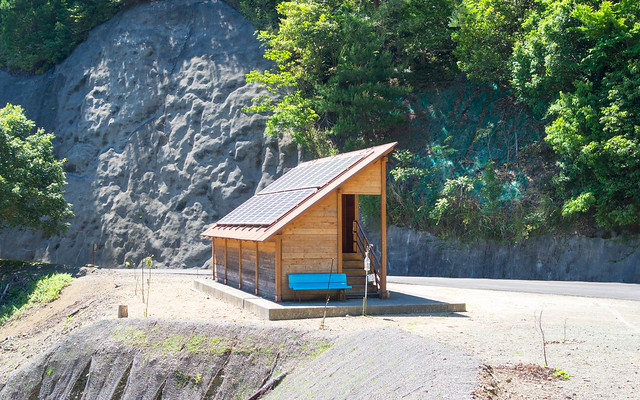 Once back on the trail, it was a pleasant walk without too many steps--another blue-sky day, cooler and less humid than yesterday, and we both thought "hey, this feels like we're hiking somewhere near Santa Cruz." There were several mostly level sections, and we made good time down to the river. 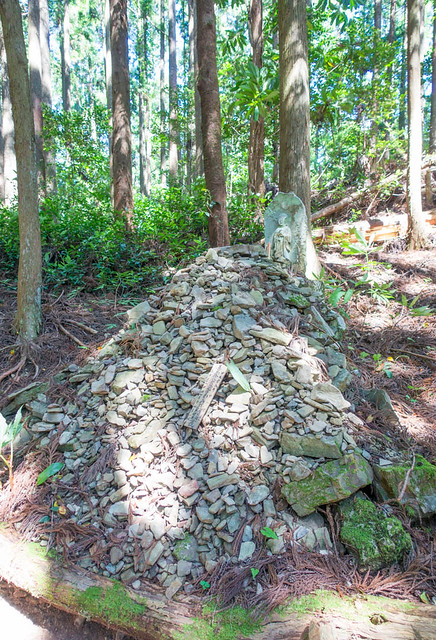 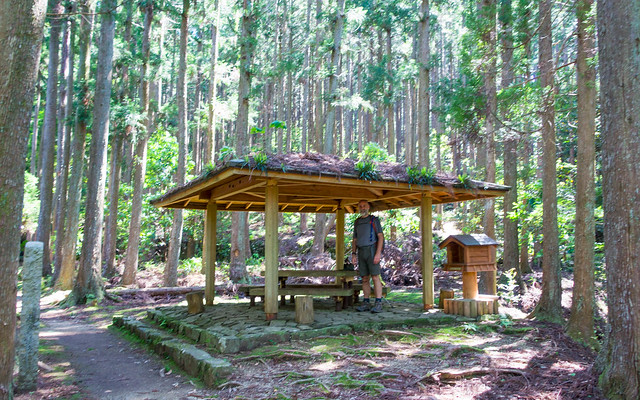 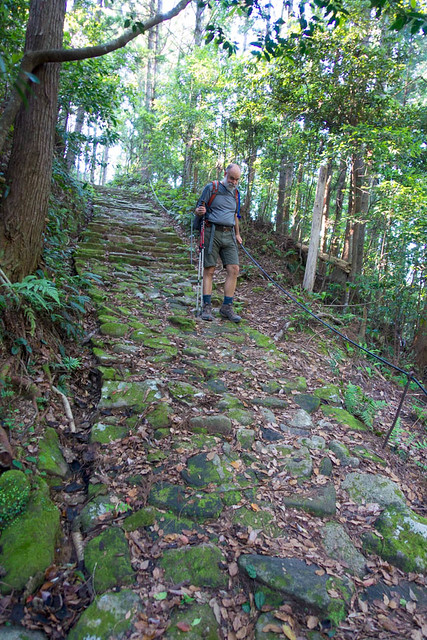 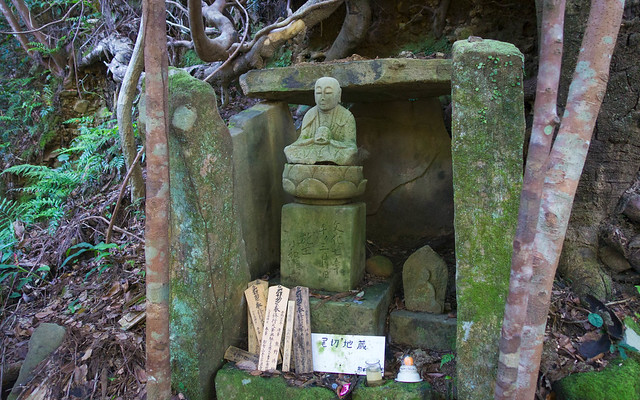 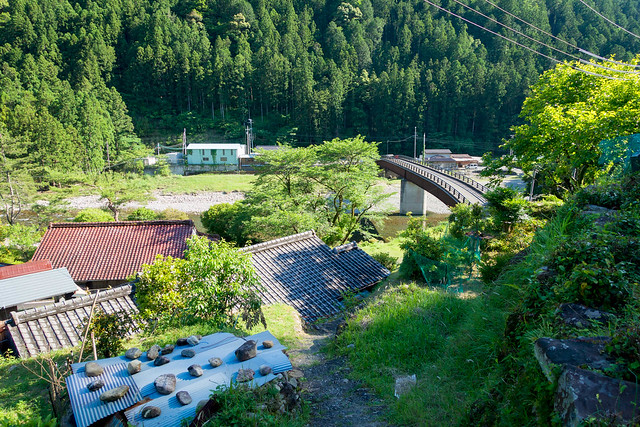 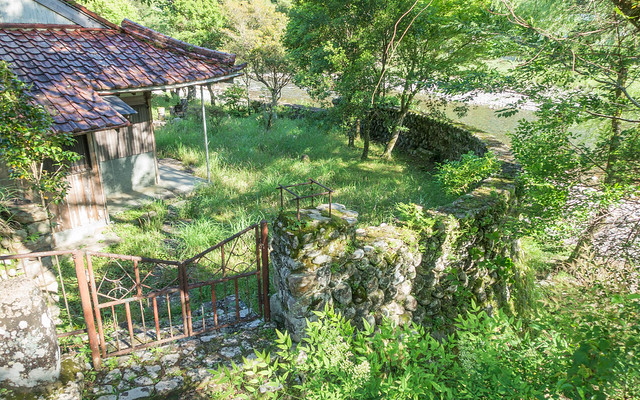 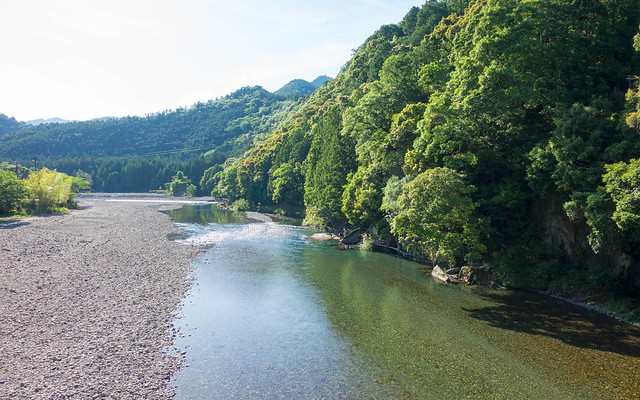 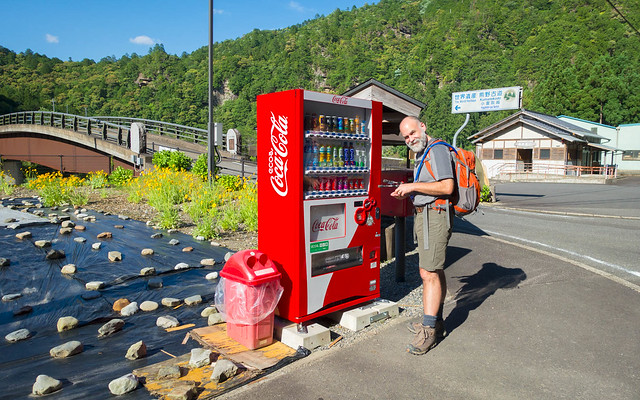 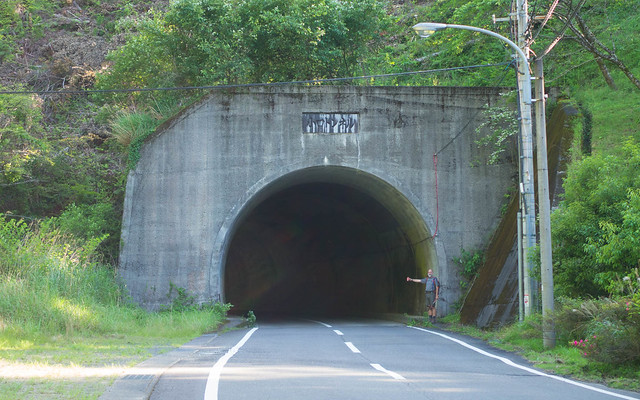 It was a short 10 minute walk over to our lodging--a rest house named Momofuku, and as we were early we went to the small store in town and enjoyed a beer outside before dinner. Shower, dinner, and sleep rounded out the day--tomorrow will be a tough day, and we'll want to start early. 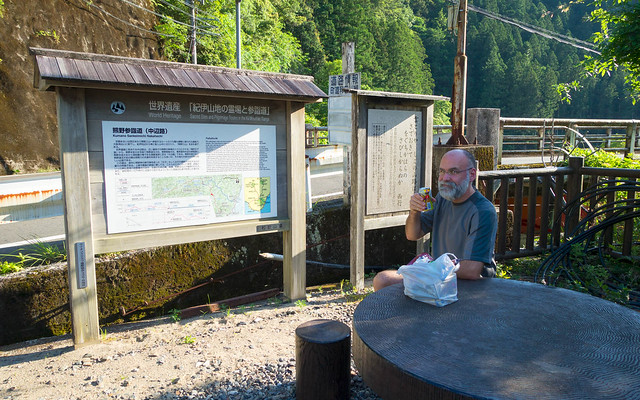 Rewarding ourselves with biru 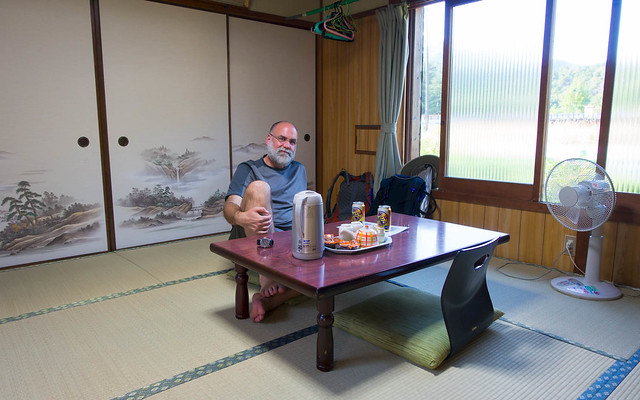 Room for the night