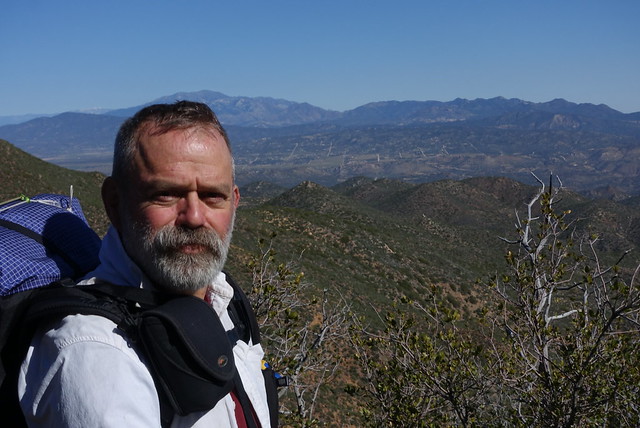 This is one of those days where it was just all about making some miles. Nothing exciting anymore about walking through chamise chaparral. It's not that this was a dull day, it was just more a day where there weren't too many highlights. Let's see... what were they?

Around mile 127 the trail had a great view over the Anza plain to Mt San Jacinto and Mt San Gorgonio. Only San Gorgonio had snow on it, and not a lot at that.

Used my umbrella most of the day again. Here's a pic that a passing day hiker snapped: 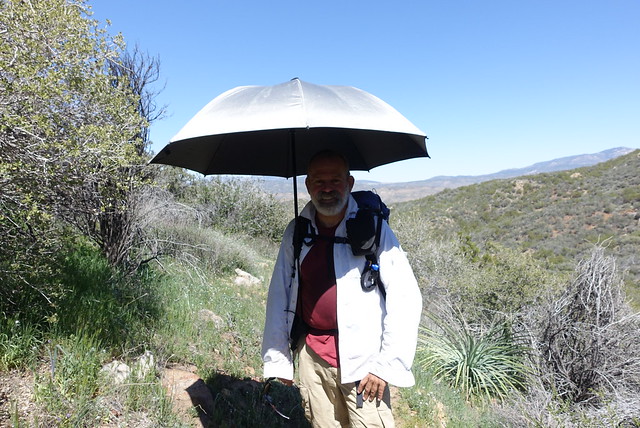 Tule Spring was grassy and had cottonwoods. It looked like a fine place to camp, but it was overrun with all those nasty tiny Argentine ants. 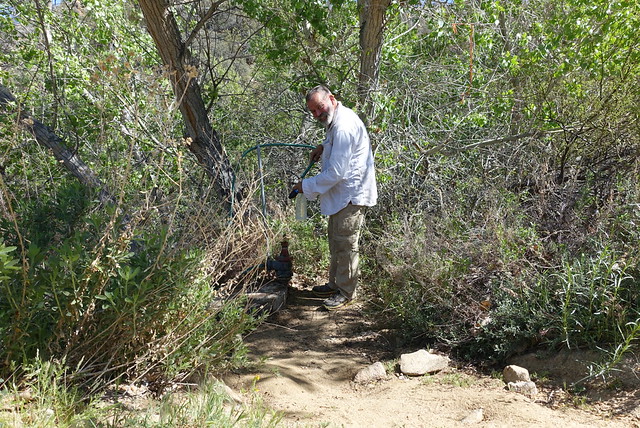 I eventually just ended up slogging along and found a great campsite among large boulders at mile 144. I was thinking of continuing all the way to Paradise Cafe at mile 151, but I called from the trail and found they closed at 3 today. 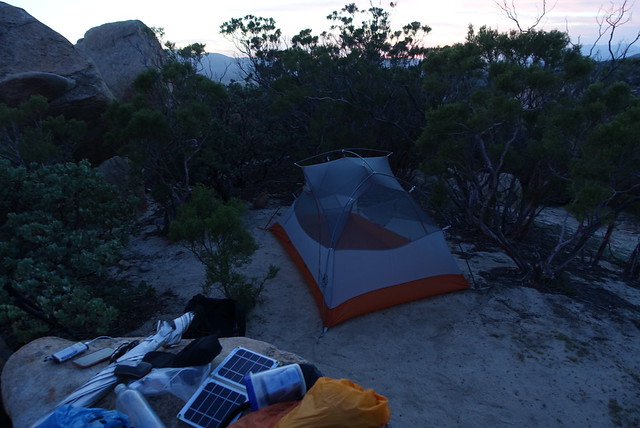 Tomorrow I'll hump those 7 short miles, enjoy a Jose Burger for lunch, then hitch a ride into Idyllwild where I have a room for the night. I was considering spending a zero day in Idyllwild, or walking (and not hitching) there--but when I called the inn to make a reservation they said they didn't have any vacancy from Thursday on--there's bike races on the weekend. So that little info nugget solved the riddle of how to deal with the PCT closure before Idyllwild--get through it as quickly as I can.

So I'll do 8 miles tomorrow morning, hang out in the afternoon, and clean up in a motel room. Then on Thursday I'll haul my butt up Devil's Slide and over to Fuller Ridge. It will be much warmer on Thursday and Friday; this is goodness as that section of the PCT is over 8000 feet elevation, and there's still snow up there. Friday I'll do the 20 miles downhill from Fuller Ridge to I-10. That's supposed to be brutal, a 6000 feet elevation drop. I suspect it's even a bigger elevation drop than from the South Rim of the Grand Canyon to the Colorado River. My quads and knees are not looking forward to it.

And I think I'll zero on Saturday. I'm not in pain, but I'm just feeling kinda worn out. Time to rest up a bit, then I can do a short day on Sunday, maybe the six miles to the Whitewater Preserve.