Slept OK, but my feet were freezing last night, and that damn outbuilding light kept on making me think it was daylight. In the morning I found out why I was so cold--the foot of my sleeping bag had slid into the walls of the tent, collecting the dew, and making a damp mess of my down sleeping bag. I didn't even sleep with the rain fly on, yet it was still very dewey. I drug my tent onto the parking lot and laid my sad soggy sleeping bag over the top to dry them both off. Good guys, I enjoyed hanging with them.

At 8 I headed over to the Warner Springs Post Office with Insatiable Toast and Copenhagen to pick up supply packages. I was happy to get more Clif Bars, particularly the Sierra Trail Mix ones I love, plus Nestle hot cocoa. Toast had bounced his footprint from Mt Laguna and decided to bounce it further to Wrightwood. Cope was just happy to get stuff. I bid them farewell--they were spending a zero day in Warner Springs--and walked down the highway to rejoin the PCT at Agua Caliente Creek. 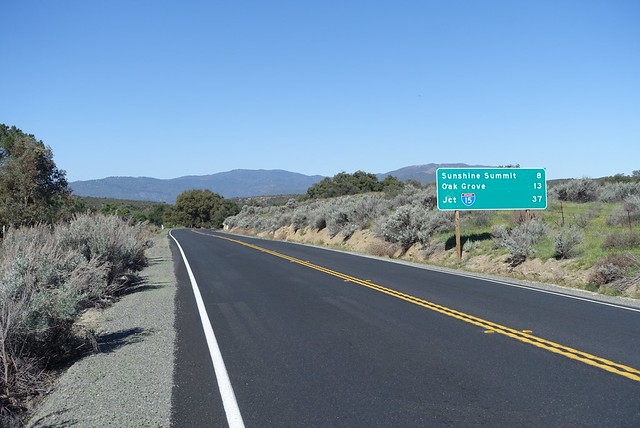 It was a lightly breezy day so I deployed the umbrella, which kept me cool all ay long. That umbrella makes me have a more pleasant day, and when I'm not using it I think "geez,, it's 13 ounces and I don't use it but every third day, I'll send it home". Then after an hour in the umbrella shade I say "ahhh, I love this." It's a keeper.

The trail crept up into a canyon with oaks and sycamores, and after a few miles the canyon got narrower and was suddenly following something for the first time: a running stream. It was real pretty, with grassy glades and sandy beaches and tinkling water, I enjoyed it immensely. 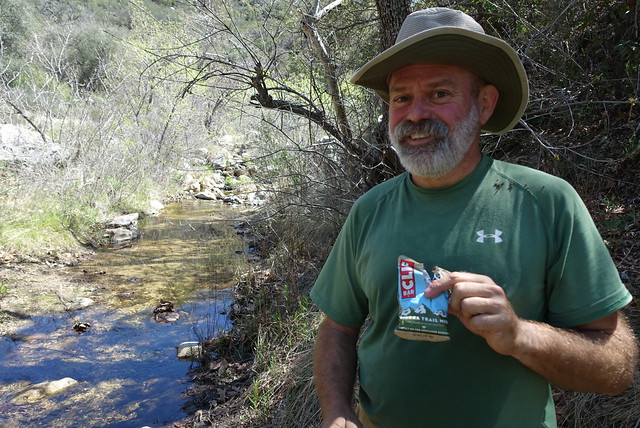 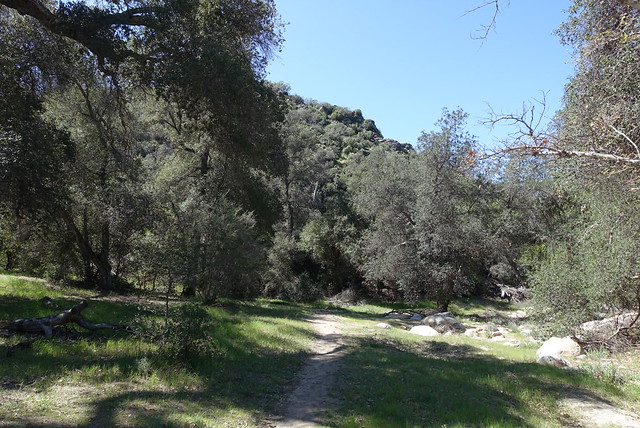 At the last creek crossing I took a long break to make some water. I figured it was 12 waterless miles, so 4 liters should do it--on a possibly warm dry day I drink about one liter for 4 miles, so that's 3 liters, plus one more to be careful.

My feet were behaving too--while I'd developed a couple of blisters over the past few days, they weren't hurting, except for this thumbnail size blister on the inside of my left heel, an odd place. I kept on having to stop and drain the fluid every three miles so it wouldn't press against my shoe so painfully. But apart from that maintenance task, I felt strong and even fast. Every day on the PCT I've had something bother me, I keep truckin', and the next day it's all better and something else is ouchy. I'm finding if I just push through it, it'll fix itself--except for painful blisters, which require taping.

The trail left the canyon after mile 115, and crawled up a chamise-covered brushy hillside that wasn't too appealing. Around mile 119 I ran into Hundy, coming at me--I'd last seen him hanging out at Barrel Spring (mile 101). He had a huge cuben fiber pack on and said he was "training" (his trail name Hundy refers to the hundred pound pack he likes to carry). We chatted for a few; Hundy ended up being the only hiker I saw on the trail the whole day.

Soon the trail--which started around 3000 feet at Warner Springs--was going up and up past 5000 feet (in that gentle but insistent PCT way) , and I wondered how muh higher it could go. There were great views of Hot Springs Peak (the highest spot in San Diego County, at 6600 feet or something), a mountain you don't often see because it's far away and in a really remote part of the county. The trail topped out around 5500 feet, then wound down a bit. The trail routing was weird--first directly north, then east, then north--and only tonight did I realize it's because it's avoid an Indian reservation and other private lands, tracing a narrow corridor.

Around mile 123 the trail went through a crazy fun boulder field, then wound and down to trail angel Mike's place at mile 127. I felt odd following the "sorry we missed you, come this way" signs past the guys garage, then spotted the bunkhouse and RV where Mike says "you can stay if your a PCT hiker!" No one was around, and after looking at the bunkhouse I decided the RV was better, so I opened the door and there was No Tent hanging out reading a book. 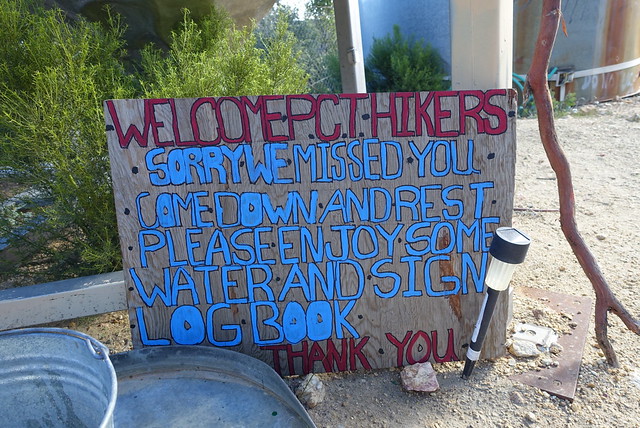 He said "come on in, take the other bed!"; I fetched some beers from the Hiker Box near the house and put in my donation, and we had a great evening shooting the shit. He's a mechanical engineer, and worked on toys for many many years, so it was fun to talk to another kind-of-geek.

We slept in that cool unheated (and un electrified) motorhome real well, cozy and out of the wind, and we both thanked Mike in the hiker log book for his hospitality; it was much appreciated even if he wasn't at the house.