dan.marmot.net
< Odds and ends from the to-do list PCT waypoints on Garmin > 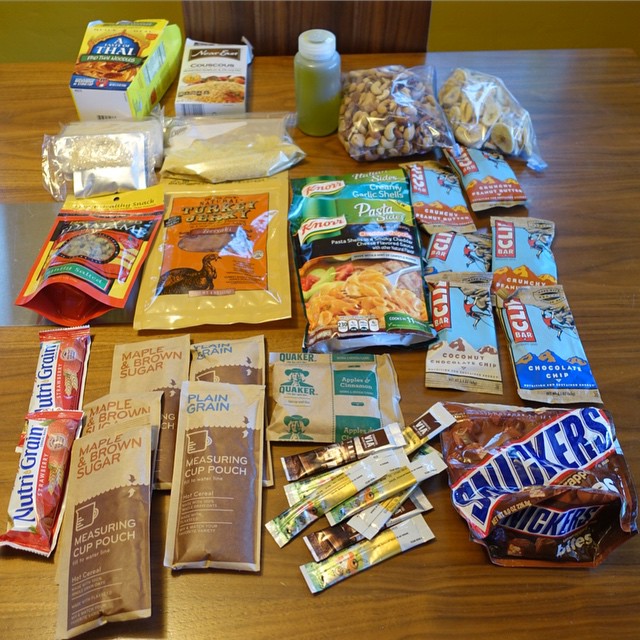 Four to five days of food.

I know the PCT goes near a lot of grocery and convenience stores in southern California, and figure I'll figure things out the first month or two on the trail. The trail doesn't go through extended wilderness for the first 700 miles, until it reaches the Sierra--and to get through that you'll need to also wrestle with a bear canister to hold your food.

While I've been buying and occasionally trying food, I've never divvied it up into parcels, I've never said "this is the food for the 3 days walk north of Warner Springs". I don't relish the thought of packing up boxes to ship out, or dealing with odd post office hours, feeling stuck in a some town because the post office now closes on Saturdays at 12 and won't open until Monday at 9, or worse making a detour to find that out or hurrying along the trail to make sure I get to the post office at 5 then waiting in a line for 30 minutes for food I thought I'd like a few months ago, but I can't stand another morning of oatmeal.

So... today I finally divided things up, and put things in the 4 or 5 boxes I'm going to resupply-from-home with, including my initial food (that's what's in the picture above). I put little tags on USPS regional rate B boxes: "Campo, 4 days", "Warner Springs, 3 days", "Cabazon, 3 days", "Acton?, 2 days", "Kennedy Meadows, 7 days", and "Independence?, 10 days". Then I divided out the Clif bars, the oatmeal, the Starbucks Via (why did I buy so much?). I put nuts and banana chips in smaller ziplocs, deboxed the couscous into ziplocks, and weighed everything, then counted some calories for the "Campo" box to see how caloric it was.

My initial box weighs in at just under 3000g (6.6 pounds) and comes in at 14000 calories. OK, that works for four to five days. The PCT passes very close to the Mt Laguna store at mile 42 (roughly three days in) and I'll definitely stop in there and get something to nom on. I do like keeping the food weight down through the first sections in southern California: there are longer waterless stretches where I'd rather be carrying another liter of water than another kilo of food--and knowing a rough "food weight" is good.

Past Tehachapi it gets more interesting--long, remote dry stretches without stores. I'm thinking I'll do the 30 mile hitch into Lake Isabella to resupply for five days to get to Kennedy Meadows, rather than carry eight or nine days of food and lots of water from Tehachapi.

For Kennedy Meadows, I'll be sending a pre-packed bear canister of food for seven days as well as my snow gear (ice ax, powder baskets, crampons, warmer clothing, darker sunglasses, another pair of gloves.) Six or seven days after KM, I'll head out Kearsarge Pass to Independence, resupply there or take a bus to Bishop and back, and stay overnight. I'll pack up, then head back through Kearsarge and hump the ten days to Mammoth Lakes for a long break.