Seven days left, and I've been busy doing little tasks here and there. It's been a bit of a whirlwind trying to get those last little items all things all sorted.

Monday I had lunch with my buddy James, who started hiking north today. I was pretty anxious and just kept on thinking about what I needed to do, while he was relaxed and planning his last couple of days at home. He told me "You're just as anxious as I was last week". Yep.

So here's my last minute list of things that I'm doing. 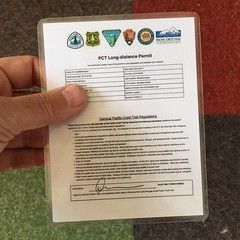 I printed out the PCT permit and campfire permit, doublesided, and 4-up, and laminated one of them. I'll put the extra copies in one or two of my resupply boxes. 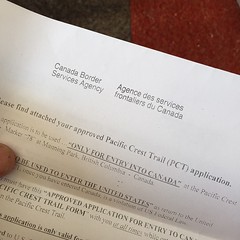 It arrived on Monday, yay--I mailed it on Feb 21! It's good for the whole 2015 calendar year, only for entry into Canada by walking across the US boder at monument 78. I'll be doing that exactly once.

The other items really don't warrant a picture :-)

Wallet. What will I take? Not much: driver's license, ATM card, credit card, some cash, and my Global Entry card later this summer for crossing back into the US. I like the Global Entry card, it's waterproof and lightweight and not-quite-so-precious as my passport.

Make Tyvek Ground Cloth. Uh, scratch that idea. It'll save me maybe an ounce; I'll just take the one designed for the tent.

Finalize food for the first two weeks. My plan is to buy food as I hike along, but I still need to plan for the beginning of the trip, from Campo to Idyllwild. That means Yet Another Trip to REI) and Costco, as I'll need to stuff some food in the bear canister for a Sierra resupply box.

Download maps onto GPS. I've decided not to take paper maps. One thing I do know is that I navigate pretty effectively, and I'm not very worried about unreliable electronics. I've dumped topo maps onto my Garmin Oregon 600 for California, Oregon, and Washington, and also downloaded full detailed maps from OpenStreetMap for those three states and put it on the GPS as well. I'll download both the 2014 and 2015 routes and waypoints (which have different mileage markers) from Halfmile's Maps this weekend. Maybe I need paper maps later in the trip, but I doubt it.

Detours. On Monday I spent an hour plotting out detours for two PCT closures near Idyllwild and Lake Hughes, then shared them on Caltopo.

Finish packing. This means putting the food in the pack, compressing the down sleeping bag and down jacket (gently), adding four liters of water... and weighing it. Then it's time to unpack it, put the food in the bear canister, and make it work.

And the non-hiking stuff...

Yeah, there's some of that happening too. I need to finish taxes, replace a window crank, fix a hard-to-turn faucet, wrap up work. It's really hard to keep focus on one thing, and my to-do list is prioritized but seems to be stuck at a dozen things left to do; as soon as I cross one thing off I remember another thing to do.

This is really happening, and soon. I'm thinking about how I'll be dealing with things next week, when my days will consist of watching wildlife and clouds, wondering about the weather, and thinking about where my next water supply will be.

It's going to be a very abrupt change from these last hectic days, that's for sure!