A wonderful comfy sleep at the Ibis Styles near the Geneva train station left us well rested... for a fairly hardcore and incredibly scenic 12km walk in the mountains just north of Chamonix, France. 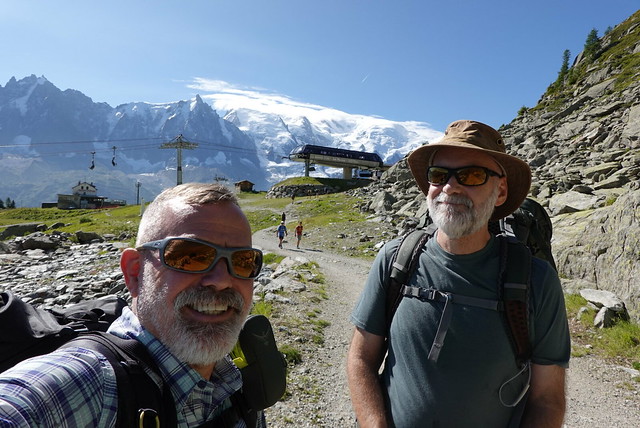 Top of the chairlifts.

Yep, melatonin keeps on working; we both slept nine hours and were well rested for the short bus ride to Chamonix from Geneva. Our bus driver/guide was an old school English twat, nattering on about the best places to get cheap food in Geneva and how climate change was a hoax because we’re in an interglacial warming period, and how Brexit would Make Britain Great Again. Fortunately, the tickets were only 5 francs (five US dollars, with the exchange rate 1:1!) so we didn’t complain to being put in the back of the bus with a guided tour. Neil-the-guide did pull a real dickish move, telling everyone to get out their passports for the strict bus-passenger border check going into France. People rustled through bags, some were worried that their passports were in the luggage hold below, we all made the passports were handy—and then we drove right on through the empty border as we fumbled for our passports. Neil-the-dickish-guide said “haha, see, there is no more border! It’s uncontrolled now” and then mentioned something about Trump and immigration and how he wouldn’t make any political comments. Such a Little Briton.

We could see glimpses of Mont Blanc, and as we got closer and closer it loomed huge, massive, more hulking and serious than any mountain I’ve seen, more hovering over Chamonix than just co-existing. Glaciers came down the various valleys (Neil the Guide said “they’re moving more quickly, which means they’re advancing! See, no global warming!”) and there was a cute little cap of clouds up on top.

We looked up and down a little main street for food—some things were handy, like Evian canteens, and found some sandwiches at a bakery before heading uphill to get on the cableway to the Augilles Rouge. Yep, if I don’t have to hike up 600 meters of elevation I won’t... and already I’m impressed at how steep the terrain is. 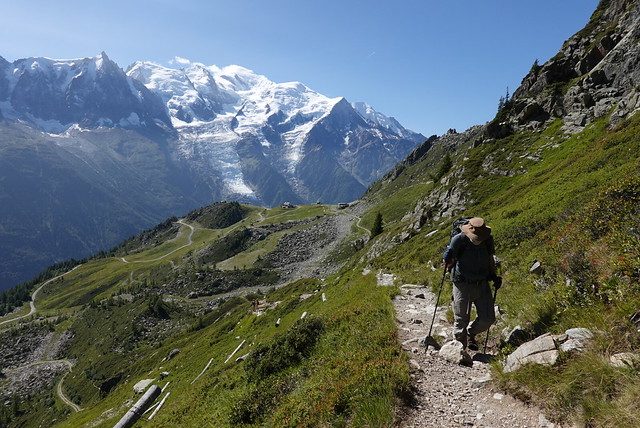 Uphill towards the Aiguilles Rouges

Up on top, we made our way up the very sunny slopes to the first col. We are well above treeline here at 2000 meters or so, and looked down on a very pretty shelf lake, dark and curvy, with rugged bare mountains in the distance. The weather was fantastic, if it weren’t for the odd-looking mountains I’d say I was in Tahoe on a bright summer day, just clear skies and low humidity and is this really Europe?? We just followed the very popular trail up and up and then we were at the Lac Noir, uh wait? Is this on the trail? No. Oops. Luckily it was only a 300m backtrack. 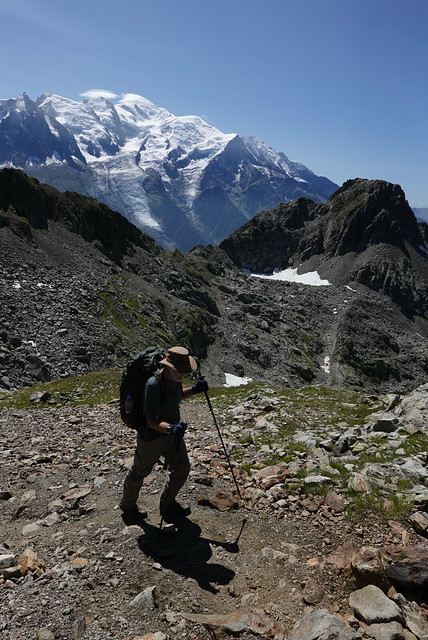 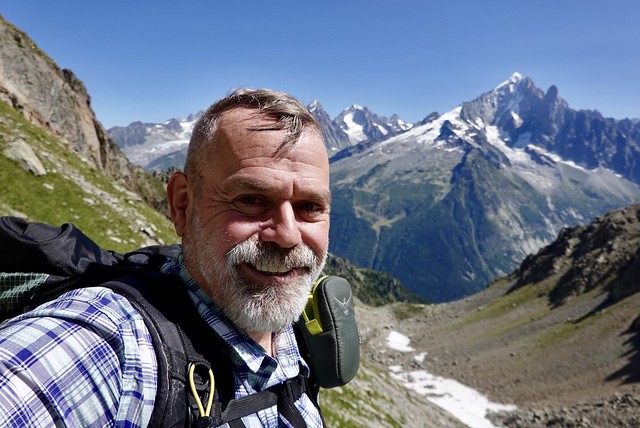 The next section was quieter—a steep downhill—and after the uphill we were thankful. I spotted a marmot and admired the views. That’s about that. 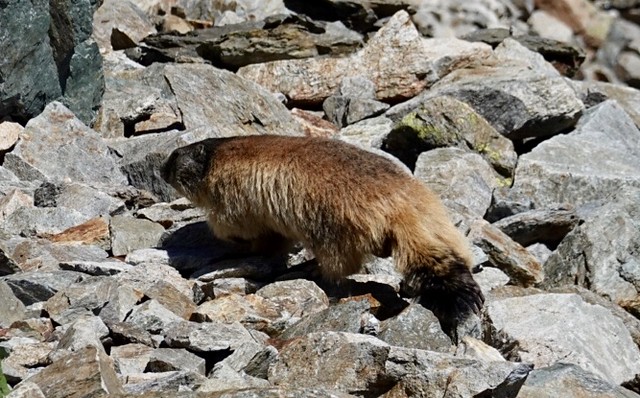 Then, from the top of the chairlift at L’Index the trail went over a few km to Lac Blanc, and oh my was the trail popular with school groups and family groups and guided groups and all of that hubbub, feh. We still had the views. The refuge was closed at the lake due to some weird lease dispute (we had planned to stay there the first night) so we kept on going, down the shoulder of the mountain, then down down a series of ladders and switchbacks that are never fun, but passable fun as it were. 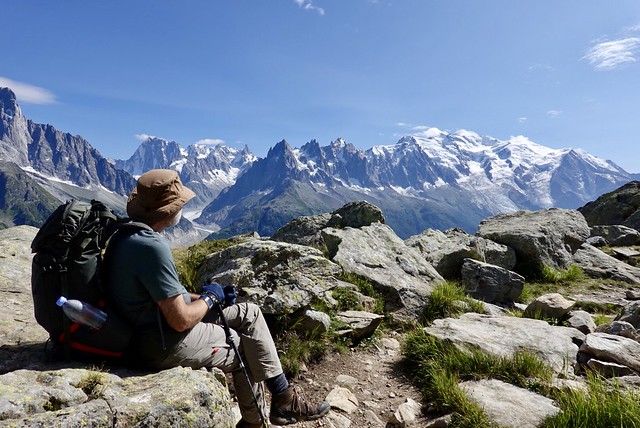 Looking at the Mont Blanc massif 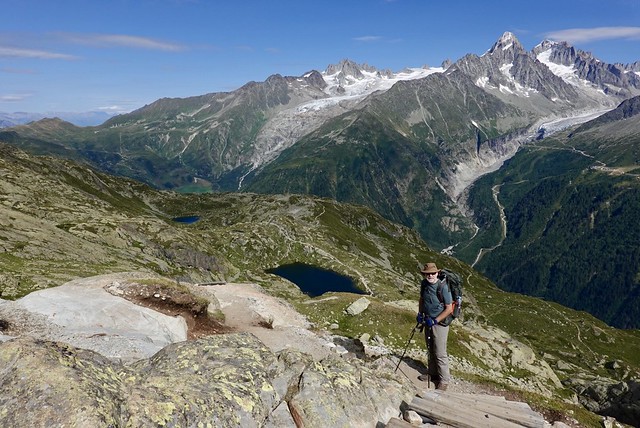 Past the Lac Blanc 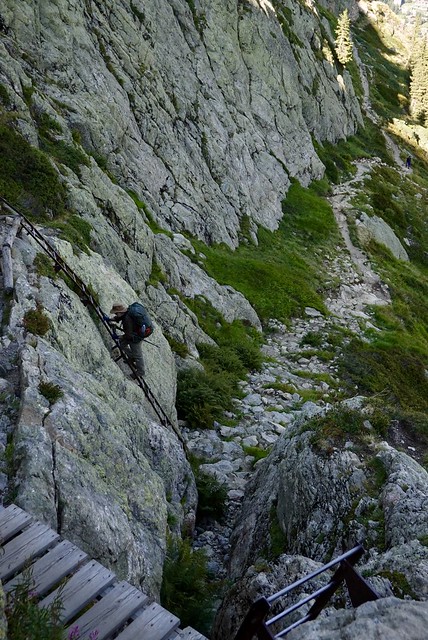 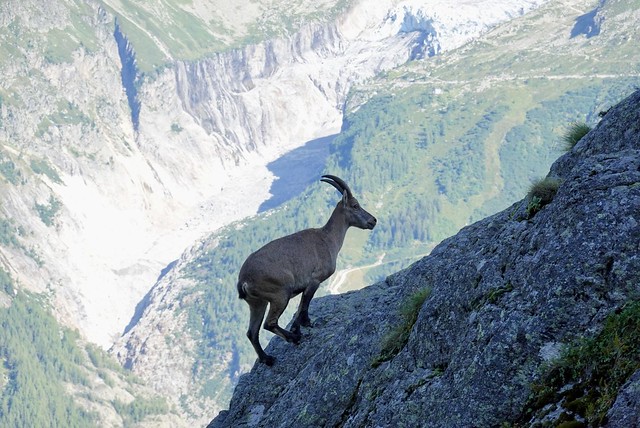 And finally, a bit exhausted, we found our way to the Auberge, with a wonderful quiet private room with en suite bath and a hearty shared dinner. It was really a lovely place... and, tired from the day, we crashed around 8:30 and slept slept slept. 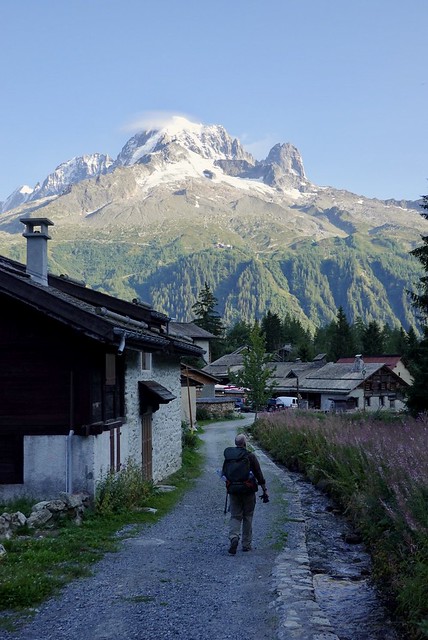 To the Auberge La Boerne