Yawn, neither of us slept well, the wind gusted through the night, every twenty or thirty minutes it shook our little cabin and startled one or the other of us awake. We didn’t sleep in either; we set alarms for 6:15am so we could pack and get on the 7am bus to Invercargill.

The bus came, we were groggy, we were dropped off at some transfer town with few people but a really good cafe with coffee... and at 8:30 we took off for Invercargill, arriving just before 10. We both stepped into the Southland Museum thing, and one of the staff was handling a tuatara and letting you pet it. Weird feeling--I've never touched one before—-it felt more like the skin of a deflated balloon than reptile skin; though it has the same body plan as a lizard it definitely doesn’t have that smooth slippery scales of a lizard. 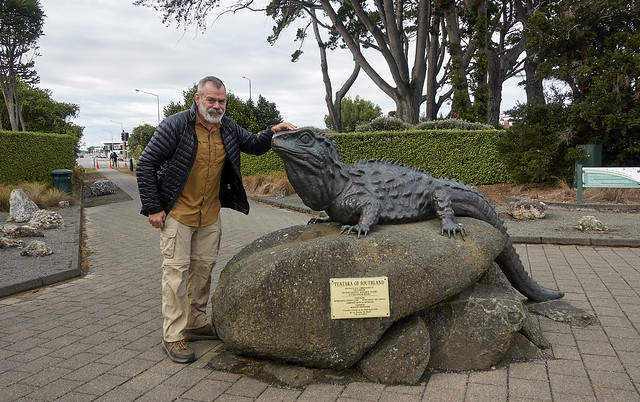 The Stewart Island ferry shuttlebus picked us up, and we headed down to Bluff, not quite raining but threatening. The ferry departed on time, I spent the hour crossing the strait staring straight out the window and trying not to think about the huge swells we were riding up and down. I was on the verge of seasickness, but never made it there. 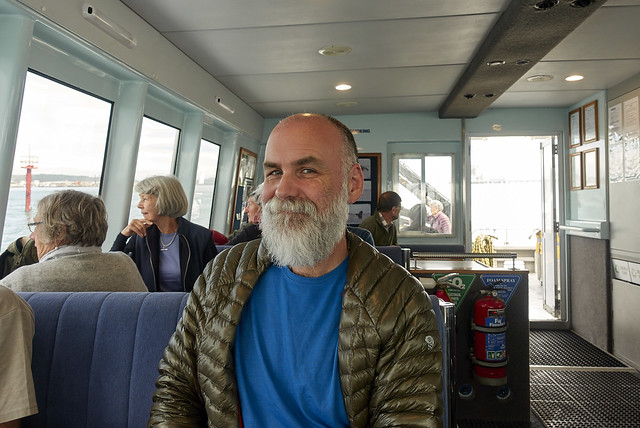 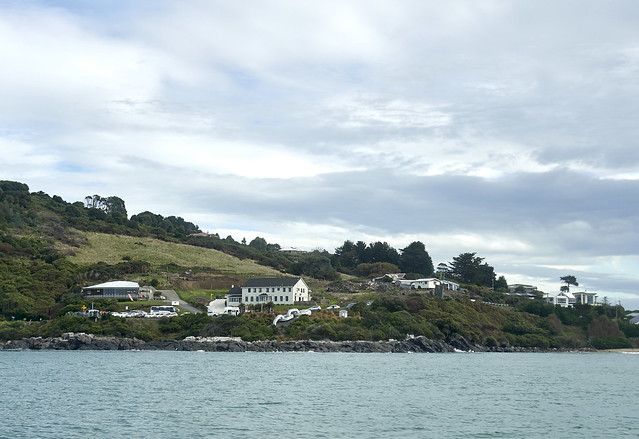 When we arrived in Oban on Stewart Island, well, it was unexpected looking, like some lost subtropical fishing village, sleepy, with blue green waters and a single everything: single school, single church, single pub, single whatnot. We trundled over to the DOC office and picked up our tickets; hm, they actually have spots open at the second hut... should we skip the first hut? We decided to double up on the hut reservations, as the weather was going to be nasty rainy windy overnight, and we’ll do a 22km walk today, possibly, to avoid getting soaked.

With that sorted, and the fish-and-choops shop closed (for the season? permanently? hard to tell), we decided to just get some sammies at the market, and we called Aussie Pete the Tuktuk Driver for the 11km ride to the trailhead. We’re glad we did that; it wasn’t a very interesting road walk. A few pictures under the chain link sculpture, and we were off. 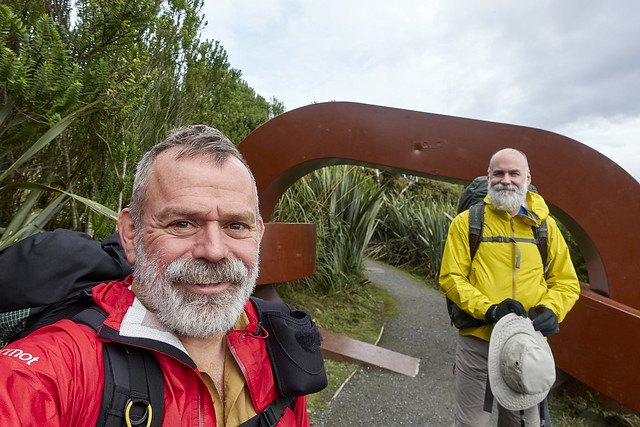 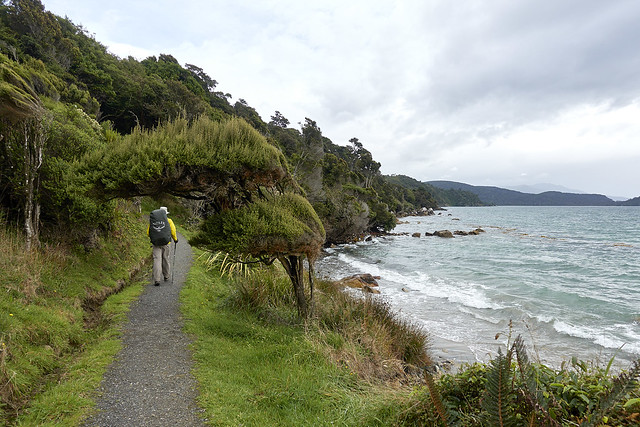 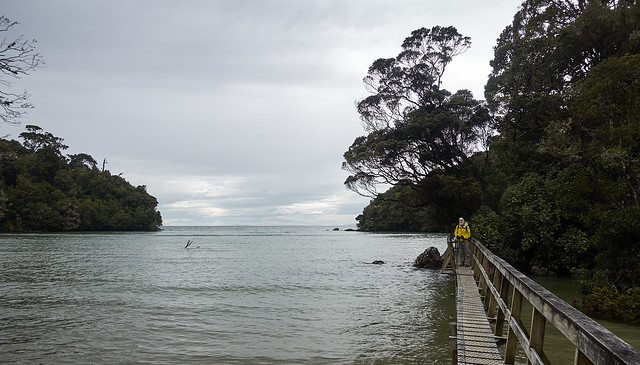 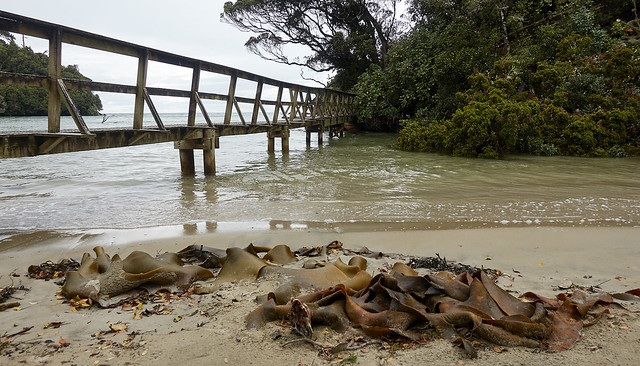 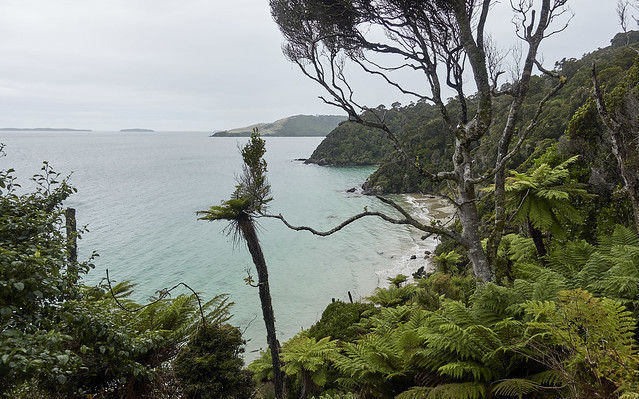 I immediately liked the track—the vegetation was lush and interesting, we were perched on a little slope above the sea, and we could see our supposed destination at Port William Hut across the bay. Yay. But we had arrived at high tide, so we had to go up and down and up and down to get to the first long beach walk at Maori Beach... when it started to sprinkle on us. At least it was warm and humid, 17C, and we were sweaty. 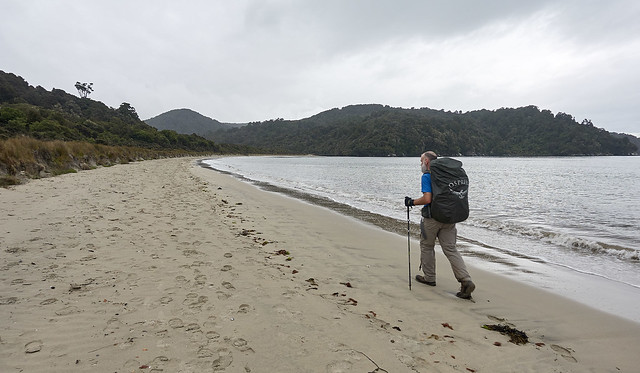 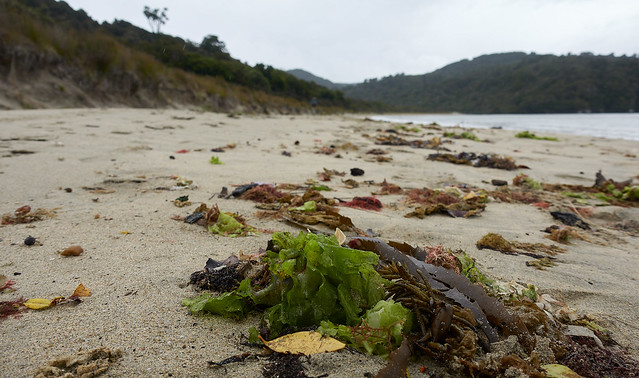 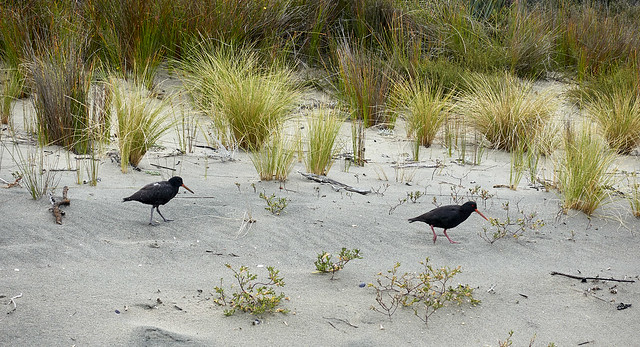 A bit further along the track, just about two hours after we started, came the junction to the Port William Hut. It’s 2:50pm. Do we want to call it a day? Hell no. Let’s hump it over the hill to the North Arm Hut. It’s only 11km, right? Three hours. Well... not really. 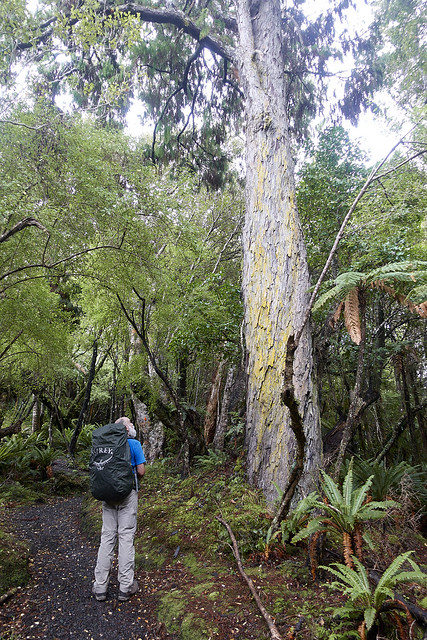 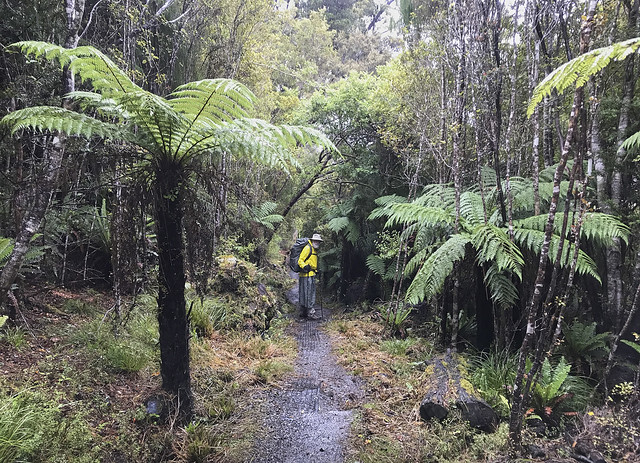 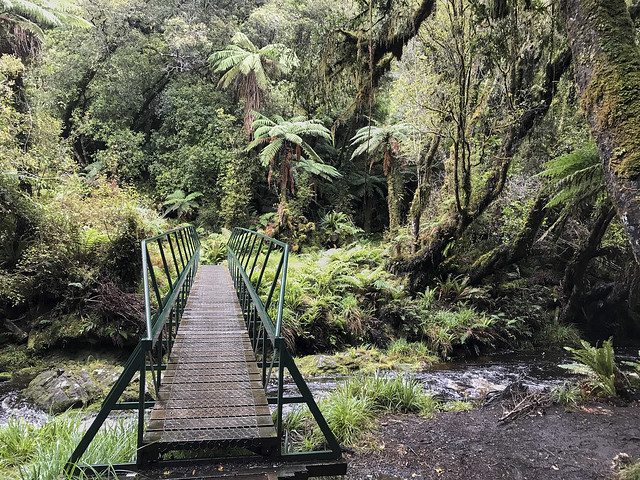 Once the track turned inland, it became a tree tunnel. No real views, up and down hills seemingly at random, then after crossing a stream on a bridge the track aggressively went up and up and up, gaining 200 meters in elevation, then going down and up, undulating for no particular reason. We were getting annoyed, and then the mud started, a few pools to hop around at first, then long 30 meter sections. Nothing knee deep, but at this point we were soaked, even though we found a nice shelter under some relics left over from logging days to at least eat something. 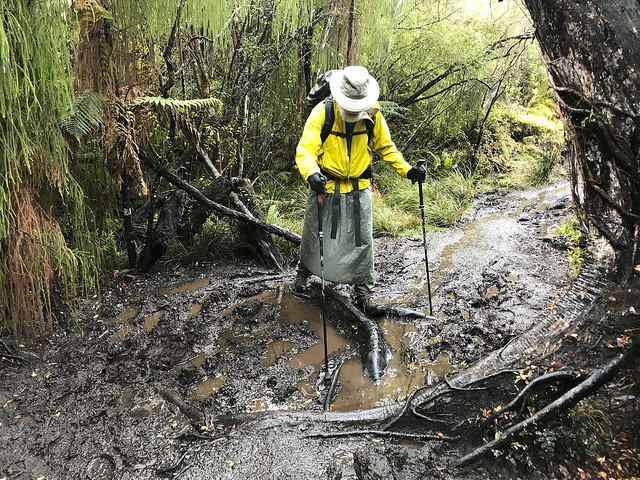 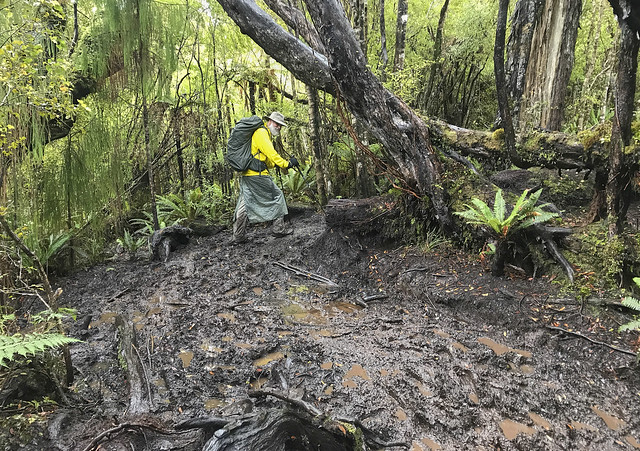 That was pretty much the 3 1/2 hours of late afternoon, though if you were to ask me it felt more like 6 or 7. Up, down, up, down, through mud, oh hey a new section of track, oh back to more roots and mud. We did hear a kiwi (male), but didn’t see him, startled a couple of wood pigeons, and scared away a whitetail deer (I got a picture of that!)

We finally pulled into the hut at 6:30 and tried to figure out why there weren’t any vacant mattresses. Oh that’s why: the sardine style bunks sleep six across (two upper, two lower) but there are only five mattresses out, folks had splayed out a bit. We squoze another mattress in and made dinner in the common room, not quite as cramped as other huts, but filled with a dozen German walkers who couldn’t be bothered to even say hello back to us, in their own little cocoon. 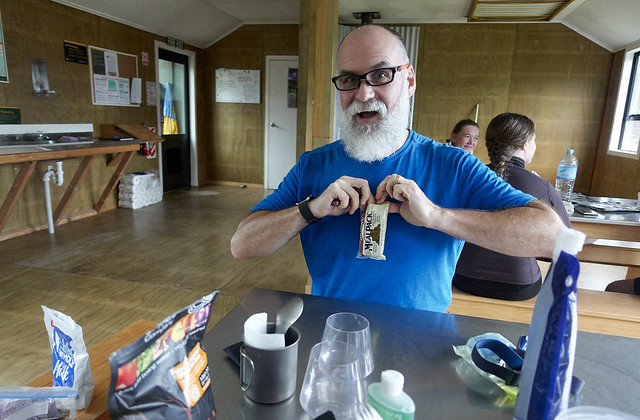 The rain’s really picked up as I write this; blustery winds, just pounding rain against the south-facing windows. One good thing about this hut: there’s no electricity, so no lights, and it’s 8:40pm, pretty much dark now, and there are just four people left in the common tables. Time for me to go to sleep, methinks, and I'm kinda glad this is winding down, it’s been two straight weeks of walking, no zero days, and I’m looking for some downtime from this full-on vacation.

Well, today was probably the least eventful day ever--a short 11km walk. We just up and went; it was showery and rainy and windy but that's all fine, we'll be sleeping in an actual hotel for the first time this trip. 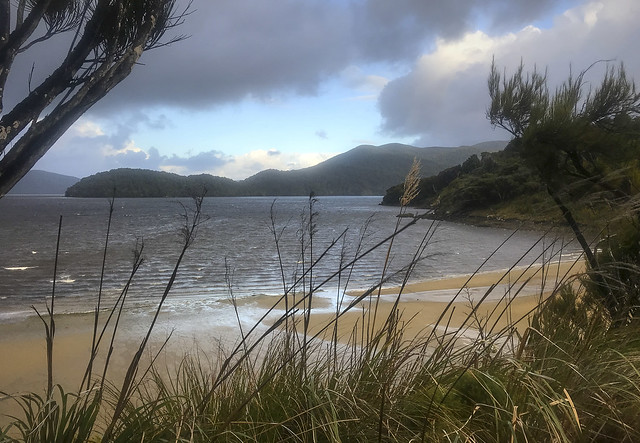 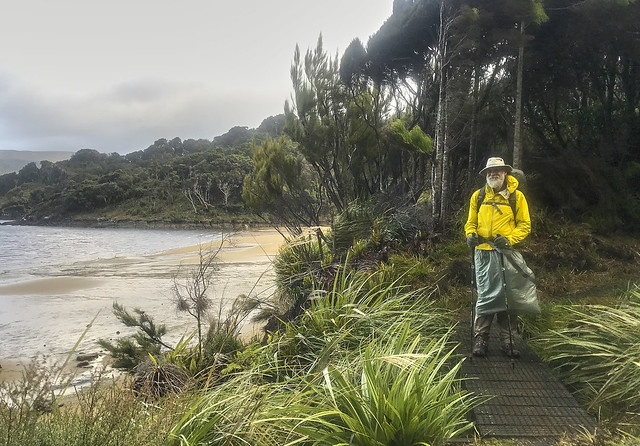 Nothing really to report at all--a fair bit of tree tunnel, with coastal views here and there. We happily warmed up with coffee once we were done, then had a wonderful dinner at the single fancy restaurant on the island on Church Hill, yum. Finally got to try muttonbird, a salty treat, as well as Bluff oysters. Tasty. 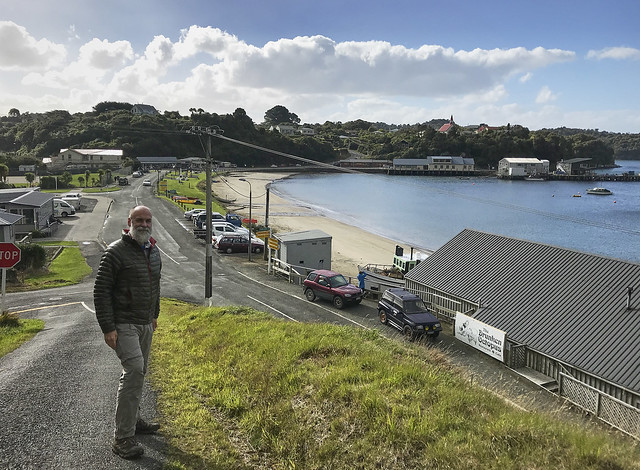 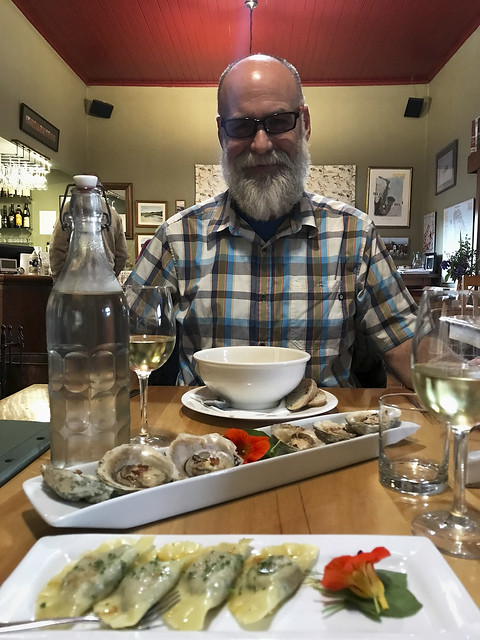 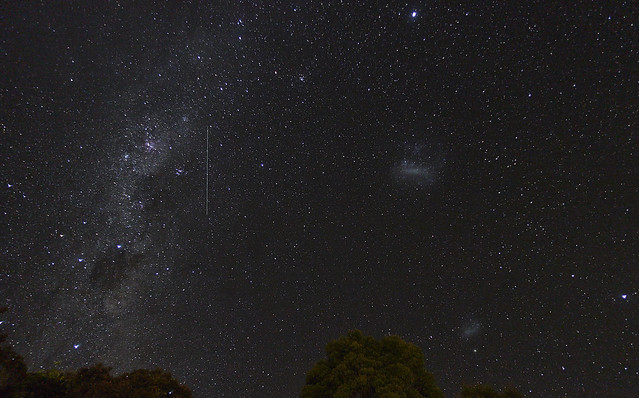 And in the morning, back to Auckland. A fun couple of weeks of walking, but I'm really done, and would love to just relax and mellow out with Neville and Tim for a bit. Looking forward to that. 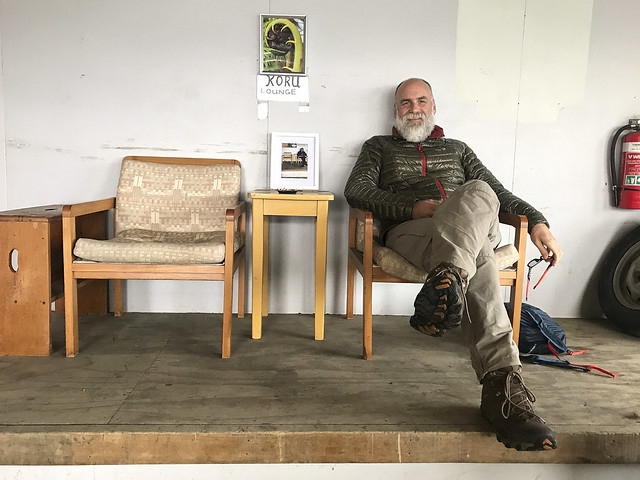 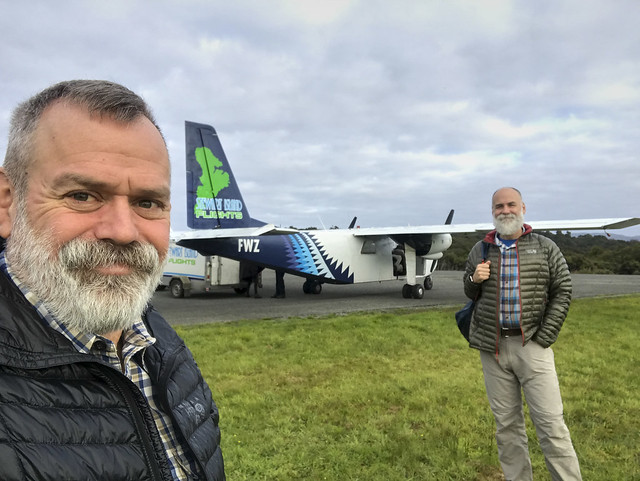