Having a beer on the deck, what a wonderful deck here at the refuge, way in the steep ravine, looking west all the way to the sea. Today's beer is Serena, a Corsican beer that's cheaper at 3.50 euro. And duh I'm writing this blog.

It rained overnight, leaving our campsite mostly in fog when it started to get light out at 5am... so I dozed some more until until the Germans ten meters away decided that 5:30 was a good time to have a squabble, and everyone should hear them, ah well. We had booked breakfast, not too bad but pretty light--a few slices of bread (French bread, that is), some jam, some butter, tea/coffee, and a box of orange juice... hm, was it really worth 9€? No, but we saved the OJ for a treat later on the trail. 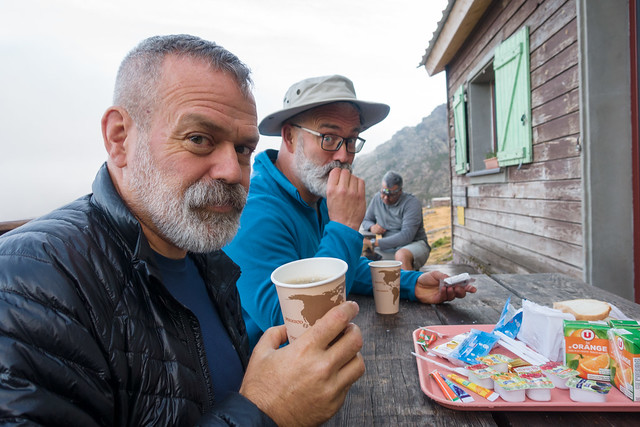 We took off at 7:30am into the cool mist; immediately heading up--steeply up--and the Brits though the silver birch forest covering the slopes was just magnificent. It certainly was a different look than I was used to; and it was at that point that I realized the geology had changed. We had shifted off the lumpy red-brown type of rock that covers the northeastern side of the island, and we were on the granite two-thirds of Corsica. The granite looked odd--not the pretty white with black flecks you see in Yosemite, but a purple-red dark color. It was granite nontheless. 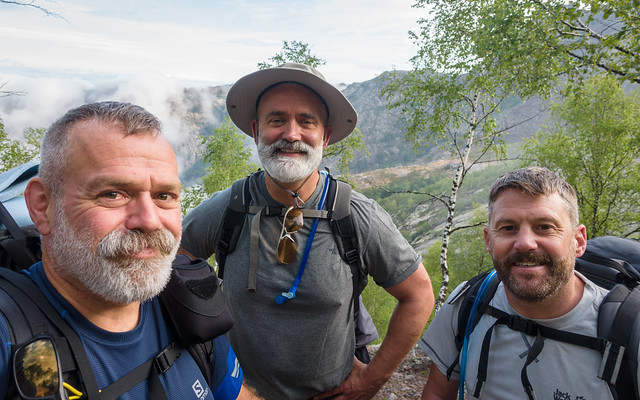 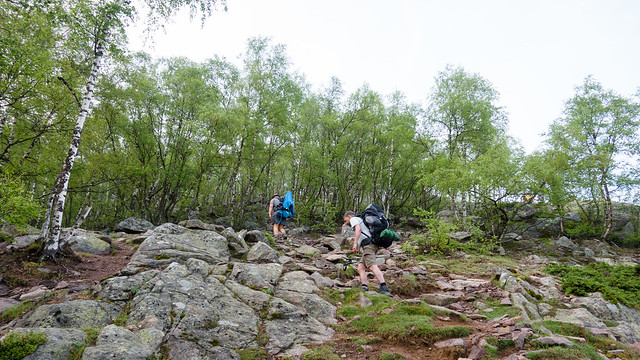 The trail. It gets worse. 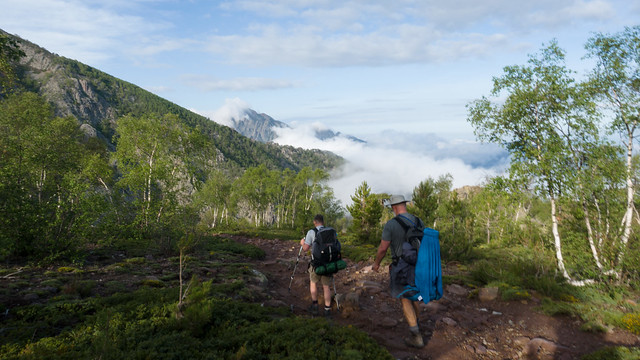 The trail went over a spur, with great views to the crags south, then dropped into a ravine before heading relentlessly uphill for an hour or more. We were passed by a woman with her German shepard and the dog was introduced as "Jerry"; Jon said "Good Boy!" to the dog as he scampered by and was gently chided with a "she's a girl, not a boy!" so perhaps the dog was named "Geri" which certainly sounds like some French ladyname. 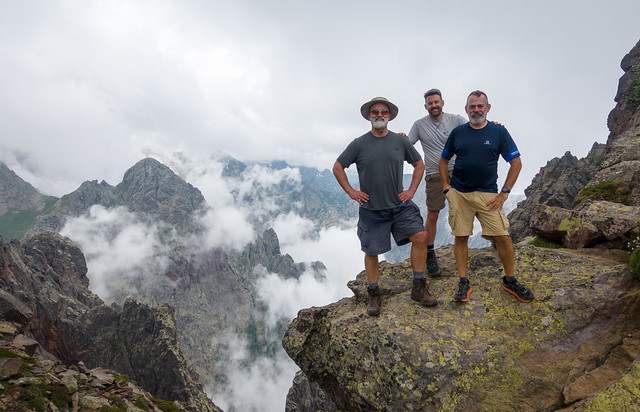 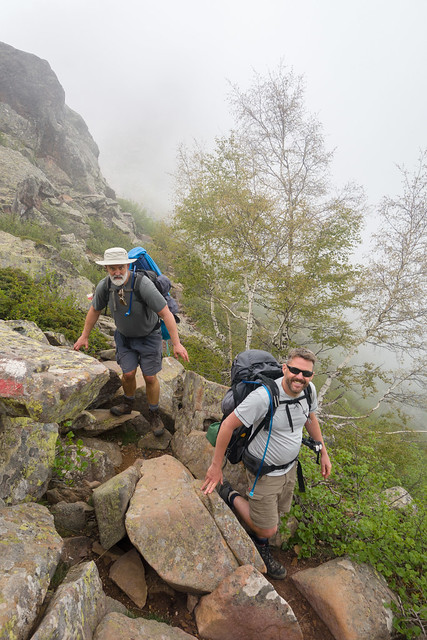 That was tedious and tough hiking up to this little gap, but at least it was cool and overcast and breezy, with temperatures around 15C or so. At the top of the pass (they call them "Bocca" here, for 'mouth') an incredible vista of granite spires and ridiculously steep cliffs spread out in front of us, with just the right amount of clouds scattered about to make it look vaguely CGI'd and a bit unreal, like some high quality fantasy movie from the previous decade. Some snaps and then it was time to savor the orange juice boxes we'd lugged up from the refuge.

And now we're at the silly part of the story, as I type this on the superpleaseant terrace at Refuge de Carozzu, where David eggs me on and wants to know why I lugged a keyboard all the way up here, telling me "you must blog a paragraph or three about losing the straw to your orange juice--the drama of discovering it missing, the resourcefulness with which we attacked the problem, and the triumph of successfully penetrating the tetra pak... ". Jon had to add "and the elation of finally achieving the juice!". Yeah, orange juice happened. It wasn't that exciting... or blog-worthy... but I must do my duty.

The next stretch was the toughest yet; we had made it to the 2000m high ridgeline and were scrambling up and down chutes and gullies and scree, with views to the west then over to the east, mostly obscured by clouds but an occational sunbreak to remind us how high were were. 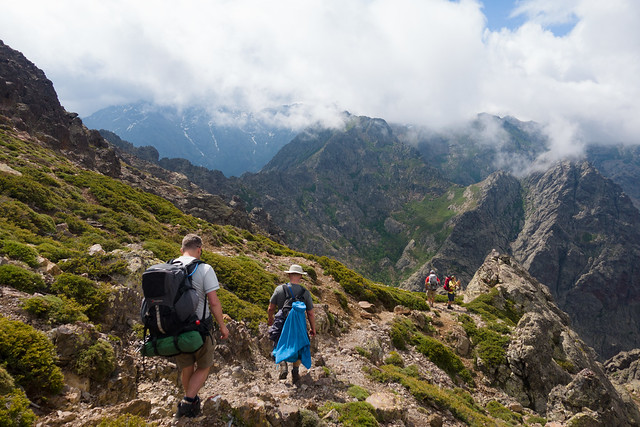 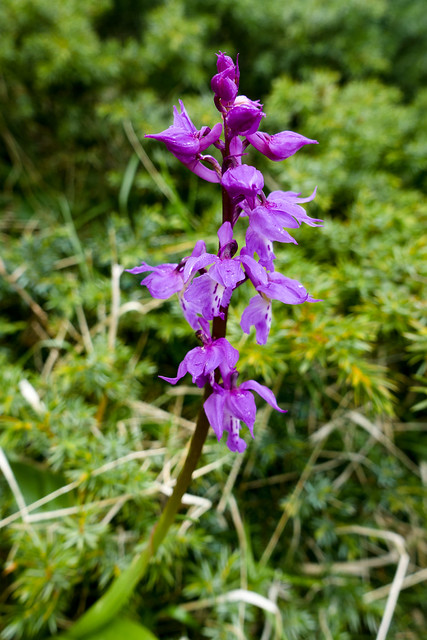 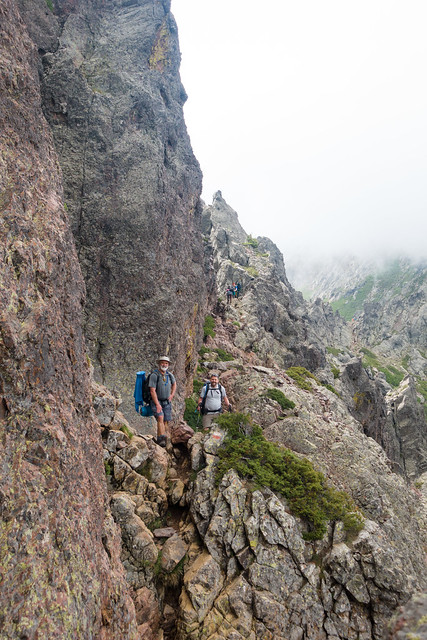 It was great walking, though it really wasn't walking, more like heaving bodies and packs, and we were all starting to feel it. Along the way we took a short 100m detour down a faux path, oops, good thing we didn't go too far, but we were back on track soon enough. A beardy young French dude in a tanktop flew by in Adidas trainers and said "fantastic looking packs, those ULA Ohm's!" and I said "Hey, that's a swell looking ZPacks cuben fiber pack" and suspected he was another thru-hiker. We passed him ten minutes later eating an incongruous sandwich along the trail and nodded; the next time he passed us on his way to wherever he was flying so fast there was no time for any pleasantries. 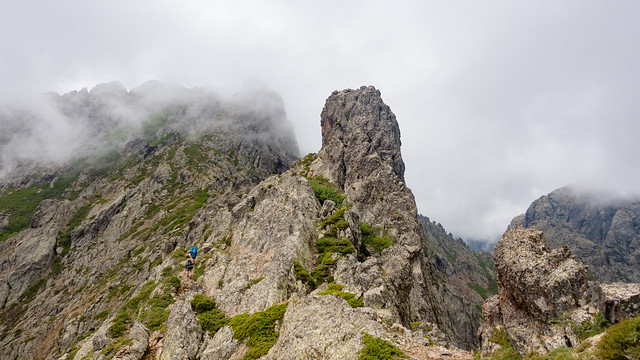 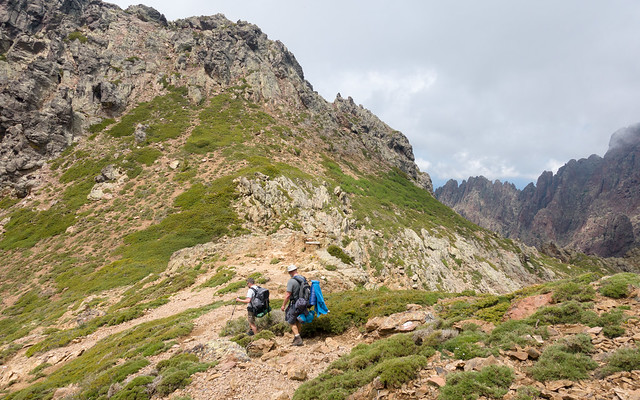 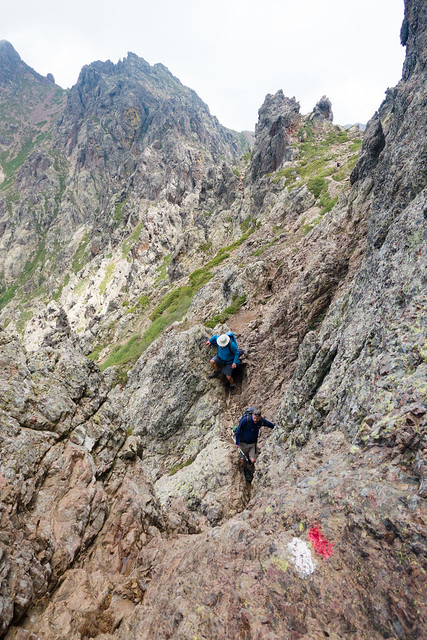 One last bocca-pass, then it was down to the refuge. And by down I mean DOWN, losing some 700m altitude in 1.5km, horrible loose angley rocks underneath that were the size of a fist to a loaf of bread that would occasionally kick up. We were all tired, we all lost our balance a few times, and all we could think of was that refuge we could see down in the ravine, and the nice little beverages it sold--was it time for beer? Or tea? Couldn't decide on that, but Jon and Dave decided that after today's rough scramble it was time for a comfy foam pad bed in the refuge, which had several spots open. I was happy with my inflatable sleeping pad so I passed... but more so I am not that much of a fan for the sounds and smells of a dozen fellow hikers for several hours.

After setting up my tent I was a bit hungry, and caught the other two on the terrace... hm, what food's on offer? OMG, they serve omlettes? Yes please, and that three egg omlette with cheese and mint (yeah) was fantastic, and I didn't care if it was just two hours before dinner. 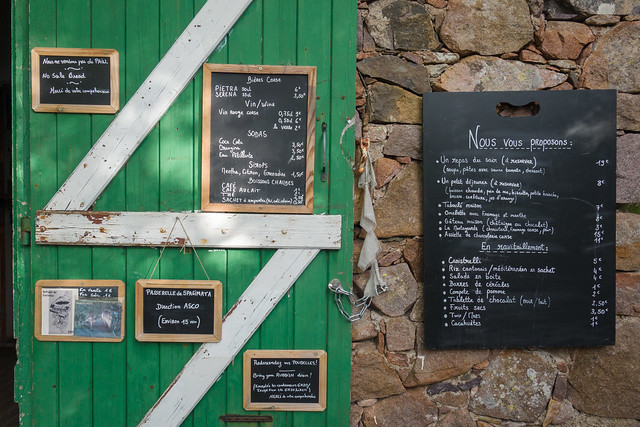 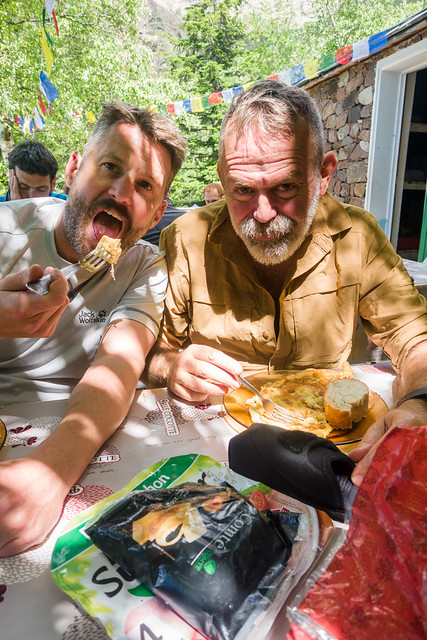 Then there was just some little time well spent with a nap and some clothes-rinsing. Dinner itself was less than compelling. Jon describes the dinner as functional: a thin green soup that vaguely might have been chicken noodle, and pasta with a can of watery tomato sauce thrown on top. At least the chocolate cake was tasty and pretty good.

We were shooed away from out table after an hour for the dinner second seating, and were left with the "what do we do now?". The after dinner entertainment is a bit lacking, and I figured I'd just finish up this blog entry before tottering off to bed.