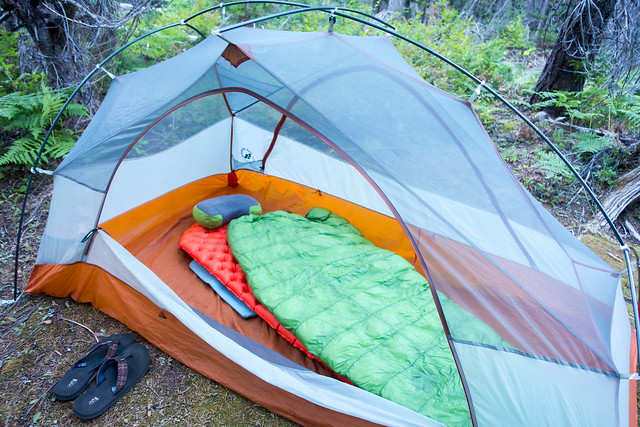 Pretty much everything starts here.

When I decided to hike the PCT in December 2014, I read blogs and bought books and looked to see what everyone was packing. It's been 15 years since I've done a backpacking trip more than a few nights, and I knew my gear was pretty heavy. The ultralight revolution had yet to hit, and the technology and techniques had both changed. I knew I'd be spending a fair bit to update things, and I'd probably end up not taking much of my existing gear--for instance, my Sierra Designs Meteor Lite tent is 7 pounds, which is so 1990's.

I summed these two thoughts up as 'comfort in cooler conditions but not too heavy', and set the following guidelines for the Big Four:

The Big Four are certainly the most expensive and heaviest pieces of gear, and they have to be the most durable.

The pack itself weighs in at 45 ounces, which is fair, and the total weight of sleeping-and-shelter is 2500 grams (88 ounces, 5.5 pounds). My goal was to be comfortable, warm, and dry in camp and in bed. I could've cut that down to around 4 pounds if I chose a different tent and didn't take a pillow or sitting pad, but felt that anything under 6 pounds was a good weight for a three-season setup that could get me through below freezing temperatures.

This was a great pack that weighs a couple of ounces more than many daypacks. I especially liked the water bottle pockets, and it carried the weight well.

Changes on-trail: None. Stitching on one of the hip belt pockets did pull apart though.

Dislikes: The padding on the shoulder straps seemed to have compressed quite a bit towards the end of my PCT hike. (it could also be that I had lost a layer of body fat in my shoulders for padding too...)

Recommended: Very much so.

I loved this tent, and would definitely use it again. I was looking for versatility more than light weight--something that would work well in 20 degree blowing snow and 80 degree humidity with lots of mosquitoes. I also wanted something that could fit two people, and really wanted enough room to fit my pack inside if I was sleeping alone: I didn't want to have to zip/unzip the tent to get at my gear when there's hundreds of insects flying about. Also, I wanted a tent free-standing and didn't require me to use my hiking poles. I didn't use a ground cloth, either; the tent floor survived with just one gash caused by a buried piece of glass in a sandy campsite in the Mojave desert.

Originally I started out with a Big Agnes Fly Creek UL1, but found it to be pretty cramped inside. I set up my sleeping bag and saw that it would touch the tent walls, which meant that if there was condensation the bag would get wet. That wasn't any good. Plus I couldn't really even sit up easily inside, which was a hassle... I knew that many nights I'd be cooking inside the tent. So I sold that tent and got the Copper Spur, and even figured out a nice way to make a backrest--just put the sleeping pad behind your back, sitting up along one of the sidewalls. Very comfy.

I loved the mesh pockets inside (there are six) and most nights I didn't put on the rain fly, so I could see out really easily. This tent isn't the lightest, and weighs in right at 3 pounds with everything. But I'm glad I got it--particularly as I went early in the season when many nights were below freezing, with occasional rain and snow.

Changes on trail: None. Swap out the supplied stakes with lighter weight ones to save a few ounces, don't take the ground cloth, and get rid of some of the extra cords attached to the tent once you figure out how to secure it in the wind.

Other options: Before I started I bought a Fly Creek UL1, set it up... and found it was too cramped, even though I'm not a tall guy. I sold it and got the Copper Spur instead.

It's the green bag in the picture above, and another keeper. Loved this bag, and it kept me very warm on those cold nights. I got it a bit longer than recommended which was good, as it let me keep my water filter in a bag at the foot of the bag during freezing nights (my water filter can't survive below-freezing temperatures.) This ended up being my most expensive item I bought for the trip, it was well worth the money. It came with a cuben fiber stuff sack, but I only stuffed the bag in the sack if it was raining out or if I knew I'd have high water to wade across. Usually I just pushed it down at the bottom of my backpack, loosely, and let the gear on top of it compress it down; I tried to be careful and not continually overcompress it, as I wanted to preserve the bag's loft. To minimize funky smells from building up in the bag, I usually wore sleeping clothes that I never hiked in: an Underarmour T-shirt, silk legging base layer, and Mont-bell over-the-calf toe socks to keep my feet warm. (the socks and T-shirt were good as town clothes, and the silk base layer was used in cold/wet weather)

Changes on trail: None. Used the entire hike. I did originally sleep in a silk liner; I sent that home after 10 days as it was too constraining.

Dislikes: It got too hot on a few nights; then again it is a 20 degree bag.

I really liked this sleeping pad; it was very plush and cushiony and let me get a full night's sleep. What more can you ask for?

Changes on trail: I went through three pads on the PCT. The first was a Thermarest NeoAir Lite. On the first couple of weeks out, it developed some slow leak somewhere, so that by the end of the night it was half inflated; I tried to find it in a motel bathtub and couldn't find it at all. So I tried a second NeoAir Lite, which also lasted about two weeks. That one developed a leak in the valve, which isn't field replaceable. I then got the Sea To Summit pad, and used it the rest of the trail.

Likes: So much better than the Thermarest.

Other options: Thermarest NeoAir Lite, which felt like sleeping on a crunchy balloon. I've used the Z-Lite Sol foam pad before the PCT; this inflatable weighs a bit less and is so much more comfy.

A square bit of closed cell foam, roughly 24" square. You can see it in the picture above under the orange pad.

Early on my trip, I realized I was getting pretty cold sleeping on the near frozen ground, so I bought a $10 foam pad in the camping section at a hardware store to put under my inflatable pad. I ended up cutting off a square chunk of it even after I got out of the cold, and I used it for a lot of things. I'd sit on it in the tent, or on a rock at lunchtime. I'd stand on it if I were changing socks and shoes. I'd use it for padding in my pack, between my back and the heavy clunky bear canister. At night I'd put it under the my inflatable mattress, between my hips and shoulders. I figure it added protection to the inflatable pad, and even a bit more comfort and warmth.

Yep, this was a luxury item, and I could've gotten by without it. My thinking was "The pillow weighs about the same as a single Clif bar, so why not take it along? I can always send it home."

It's the green and gray pillow in the picture; I found it really comfy and inflates with two and a half breaths. I loved getting a good night's sleep, and going through the day without sore shoulders. So much better than stinky trail clothes or a wadded up down jacket (which you might end up wearing on really cold nights in your bag).

Changes on-trail: I thought I'd send this home. I ended up loving it.

That's it. There are a few other 'sleeping' things I used, like a beanie and sleeping socks, but those are more clothing. This is more about the gear, and these items were also by far the most expensive things I needed to buy for my PCT hike.