dan.marmot.net
< Back to SF for the moment To Almaty >

Whelp, we're now in the slot for the next few days, starting with that 6am ride to SFO, yawn, and we'll be getting plenty of yawns over the next few days as we head to Kazahkstan via Abu Dhabi. We camped out in the Cathay Pacific lounge for a bit, then got on the Jet Airways painted aircraft that proclaimed "Jet Airways by Etihad" on its nose, but this was really Etihad flight 182 by Jet Airways, from San Francisco to Abu Dhabi, a flight that's probably in the top ten longest nonstop flights in the world. Sixteen hours, but we did end up doing it more quickly than that.

The seat, what can I say, was comfortable, the cabin crew service was exemplary, the food very wonderful--this was the best flight I've ever taken, even more so than the Thai first class flight we took last year from Beijing to Bangkok. Spending the miles for an upgrade from biz to first was well worth it. Well done, Etihad.

There was more to see on the flight over than I expected: we headed up the east side of the Cascades, and looking out the window I spotted Shasta and Crater Lake and Mt Hood. The fires northeast of Seattle have settled down as well, and I pointed out Lake Chelan and Stehekin and Mt Baker to Chris, yay, I was just walking down there four weeks ago but couldn't see much more than ten miles with all the wildfire smoke. Today we could see well beyond Mt Baker to the west, out to the Strait of Juan de Fuca and Port Angeles, it was wonderful. From there, we flew through dry clear air past the wonderful Canadian Rockies, and over even more spectacular mountains somewhere west of Calgary and Edmonton. Made me want to do a road trip one summer up there! 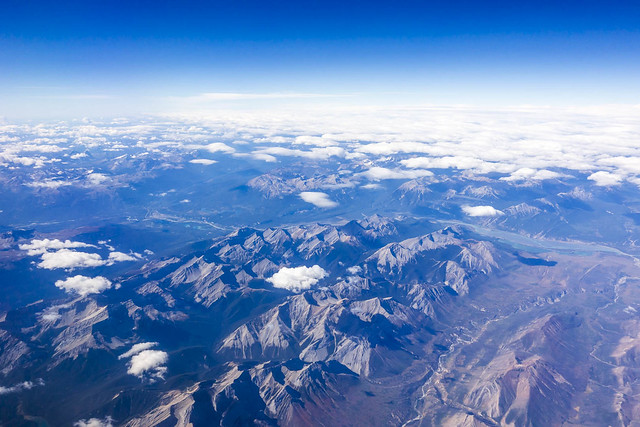 Up and over Arctic Canada--still in the sunlight, and looking down on icebergs--and across Greenland over Norway and Finland, dropping down directly over Moscow and then over the Caspian Sea and over Tehran, and cutting across central Iran, filled with dry desert mountains and looking like the Mojave from the air. Then the Persian Gulf, blue and hazy, and our landing in Abu Dhabi.

We could see a huge new curvy lumpy terminal under construction across the runway but we were a few years too early to get a jetway, so we walked down the stairs in the midday heat are were surprised that it wasn't hotter--it was maybe 104F/40C and not quite as dry as I'd expected. Immigration and baggage claim and customs took all of 25 minutes or so, we hung out in the Etihad arrivals lounge for a few minutes waiting until our 2pm check-in time at the Premier Inn across the street from the terminal, and checked into a slightly dowdy and very purple room that felt more like it should be alongside some motorway in The North (of England) than next to the Persian Gulf. 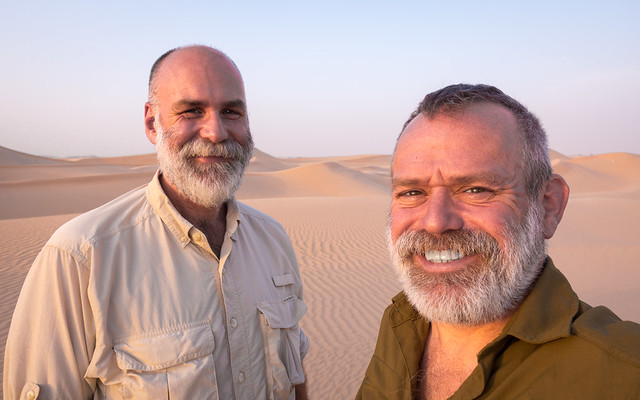 A shower, a short nap, then a "let's go on a tour". Chris had booked us on some desert tour for something to do, and we piled into a Landcruiser and set off into the desert, or more precisely down a series of wide fast six-lane wide freeways with 140kph speed limits (86mph), though fancy pants cars passed us at speeds much faster. 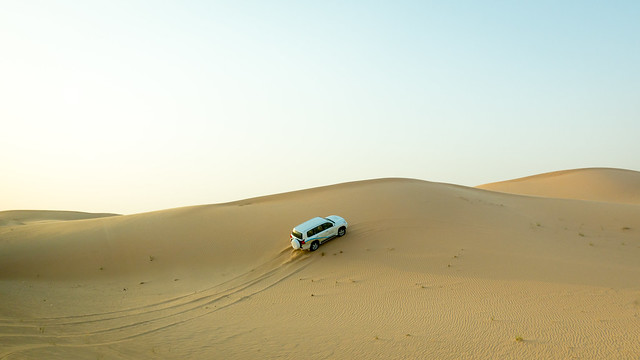 4WD in the dunes

A stop at a camel farm. OK, that was mildly interesting, I didn't expect camels to have black coats but this huge bull camel was a stunning beast. 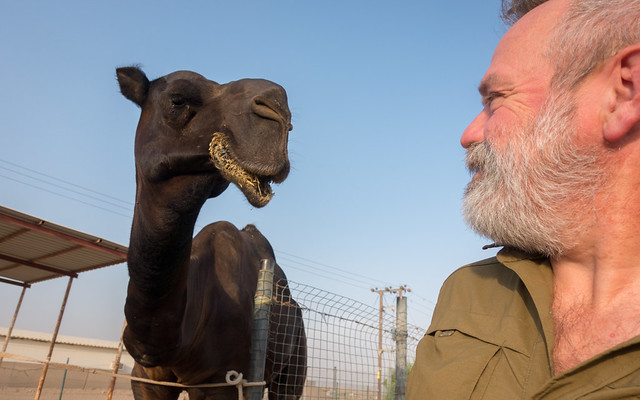 Some driving in the dunes. Ugh, no, I was in the third row seats of the LandCruiser and got mildly carsick being through around. Then pictures in the dunes at sunset. Scenic, but I was lightly sheened by the humidity and heat, and the sand embedded in the stiff wind stuck to my face, getting in my eyes (and hopefully not my camera lens mechanism). And dinner, some buffet thing where you can sit on a carpet on the ground with the blowing sand and eat under glaring LED spotlights in some tourist compound. Supposedly there was a belly dancer, but I had jetlag crashed in a tent, avoiding the crowd and the dancer's boobs which occasionally popped out 'accidentally' in pre-planned wardrobe malfunctions. Yawn. 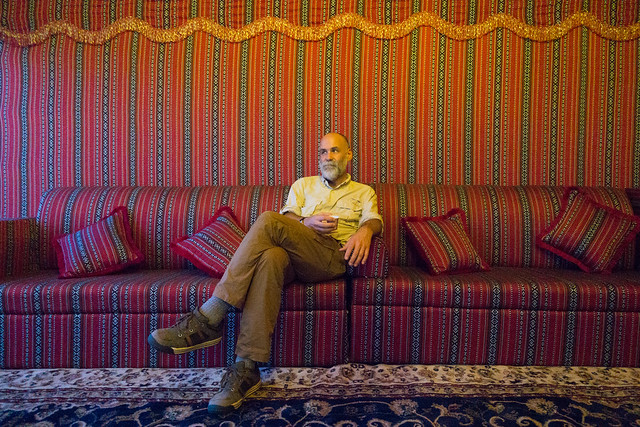 Waiting for the feast to be over

Back to the room, and to bed. Tomorrow it's off to Almaty in the morning, and to join up with the rest of the tour group.

< Back to SF for the moment To Almaty >