dan.marmot.net
< At Home for the 4th of July A great scenic day on the trail > 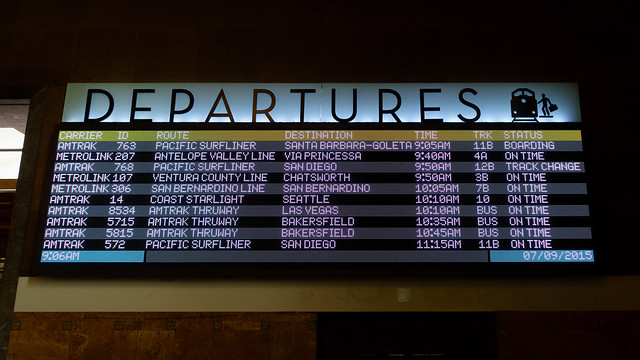 I didn't particularly elaborate on my condition when I left the PCT in Burney. I w was feeling really poor, but definitely not sick like a cold or the flu or anything. I was a bit concerned that I picked up some bug from drinking bad water, but that ended up not being the case.

The few days leading up to Burney were really hot, with temps in the upper 80s to low 100s, which made hiking pretty tough. I was sweating a lot, and was covered up from the sun with my shirt wide open to catch any breezes, but I really wasn't able to keep very cool. The air was pretty sticky as well, with an odd subtropical feel, even at high elevations, and that made things even more difficult. At the end of each hiking day, all three of us felt slightly nauseated, but we just assumed it would pass. With Sage and Junior it did, but with me it definitely did not; I felt a touch of dizziness, so much so that I asked Junior to look out for me and make sure I wasn't too stumbly.

After that long day on Hat Creek Rim, we had the short 4.5 mile walk to the highway, and then to the motel, and we got to the air conditioned room around noon. I was feeling slightly vomity, but my bowels had other ideas... and starting at 6pm, I squirted into the toilet pretty much every two hours all night long, ugh. At this point I was thinking it was more heat related, so I furiously gulped down water and made electrolyte stuff and just tried to keep myself clean after each episode. I wasn't hungry at all, and wasn't eating much except some Gatorade and bananas and apple juice that Sage had bought over at the Safeway, thank you Sage.

The brown squirts turned to water squirts, sigh, but at least that meant I wasn't going to be messing up more motel towels. I also got the blahs, and was happy we had the room for two nights. Friday was just a dazed day of Facebook and reading news and researching terms like "giardiasis" and "heat exhaustion" and figuring out what to do. I texted my brother in the Bay Area and he offered to help, but I didn't decide to do stop right yet. It was a real effort, though, to do any exertion; I did walk across the 100 yards across the street to Rite-Aid for loperamide, and to mail a package home of things I didn't need, and that was a major effort. It'd be a struggle to walk a mile, much less ten.

So I decided to wait it out. The runs did stop in the evening, mostly, but I was worried about the next few days. There were no motel rooms in Burney for the Saturday and Sunday nights; it was the 4th of July weekend and the Burney Basin Days festival was happening in town. I thought about maybe getting a ride down the hill to Redding and a motel room there for a night or two to recover... but how long would that be, really? Three or more days is what various reputable sites say (Mayo Clinic, John Hopkins). I could also just go to Burney Falls State Park campground, but recovering from heat exhaustion in the heat didn't seem wise. I also just really wanted a flush toilet near a shower, you know, just in case.

Finally I said "Nope, this is just going to be a big old mess to hang around here, there are no good options", so Friday evening I told my brother that I would very happily take him up on his offer to get me out of town. He said he was going to drive on up, and he did that evening, stopping outside of town and meeting me on Saturday morning at the motel.

Now the next question was "Should I go home? Should I hang out in the Bay Area?" I was looking at flights home to San Diego, and while they're expensive at around $200 that's really just two nights motel. Maybe Redding? Nah, that leaves at 4pm and requires a plane change at SFO. Maybe Oakland or SFO? Nope, there are only flights after 9pm. Hm, maybe Sacramento? There's a 2pm Southwest flight. That was the ticket. I hopped on that flight and was home just after 4pm; it does help to live just ten minutes drive from the San Diego airport.

Saturday I generally felt as crappy as Friday, but Sunday was considerably better, and on Monday I felt 90%... and tried to figure out what I was doing with the rest of the summer. Do I get back on the PCT? What part? I really don't want to do those long 25 mile days, I don't want to go weeks and weeks without any rest days... and I don't have enough time to do all of the remaining miles. I'd like to finish on September 5th (a Saturday) in Manning Park, BC.

And I also want to avoid the three planning mistakes I made in the past. There were two major ones: first off, I put in 'zero' days every two weeks, and I need them more frequently. Second, while I can walk 25 miles a day I can't do it every day, day after day. Lastly, town stops are lengthy, and never quite come when you want them: while I might plan to walk 20 miles a day then magically fall into a motel bed in the evening and do 20 miles the next day, the reality is that I'll walk 13 miles to the road that leads into town, spend a couple of hours hitching and getting into town, another hour or two getting around town and buying supplies, and then the next morning waiting for a hitch and only making 15 or 18 miles. Town stops are particularly time-consuming, and really do cut into trail miles achieved.

So I replanned, working backwards from Manning Park, assuming 19 trail miles a day plus a full zero every Sunday for a buffer. A nice leisurely pace... but I'll have to cut out about two weeks of trail. Where? At first I thought I'll just restart in Ashland; there are flights there. But after asking on the Facebook group 'PCT Class of 2015', someone suggested skipping southern Oregon, which has a lot of mosquitoes and a lot of 'green tunnel' trail through closed forests. That doesn't sound appealing, plus I'd really rather see the Klamath Mountains too in far northern California, which are full of weird endemic plants and strange geology--they're not volcanic like the Cascades, and I'll see a lot of Cascades in Washington state.

How do I do it? Hm, I could take the train to Dunsmuir, get a taxi the five miles to the PCT where it crosses I-5, then walk to Ashland. In Ashland I can rent a car, drive to Bend, and see Crater Lake along the way, which I'd miss by not walking the PCT. From Bend I could rejoin the PCT either west of Sisters or near Elk Lake Resort (there's a bus that goes from Bend to Mt Bachelor, 12 miles from Elk Lake, and I could hitch). 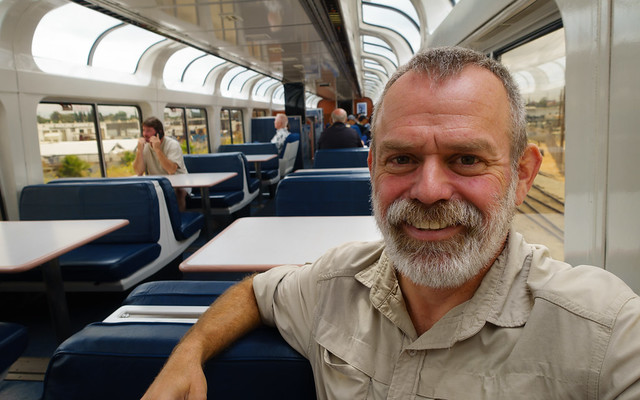 Writing on the train on the way to the PCT

I got the train ticket from San Diego to Dunsmuir on the Coast Starlight, arriving at 5am on Friday morning (yawn! but a good time to start that exposed climb north and west away from I-5)... and will be in Ashland in ten or eleven days. I'll close out the PCT by doing slower miles, more enjoyable miles, not pushing as hard, taking my time. I'm looking forward to a more relaxed pace, and this is achievable. Part of me is a bit bummed that I've now broken up my PCT hike into these large chunks, but hey, I'll end up doing about 90% of the trail when I'm done in September, and I'll have hiked around 2200 miles. That's certainly a bit of an accomplishment that I can be proud of.