dan.marmot.net
< North of Sonora Pass Past Ebbets Pass and Highway 4 >

I woke at 5 but was in no mood to get out of bed--I'd stayed up past 11:30 writing, and didn't feel like starting so early. Sage was still sleeping until I heard him stir around 6:30, and I made coffee and oatmeal and we got on the trail a bit after 7:30--a bit late, but that's fine.

Yesterday was our last day on the PCT over 10,000', which is fine by me; the altitude means not-so-much oxygen and still quite a bit of snow--the next few days into South Lake Tahoe will be spent going a bit up and a bit down between 8000 and 9000 feet. Today is a bit more undulating than tomorrow will be, and we thought we'd try for Noble Lake, 22 miles away, and get at least as far as Asa Lake. 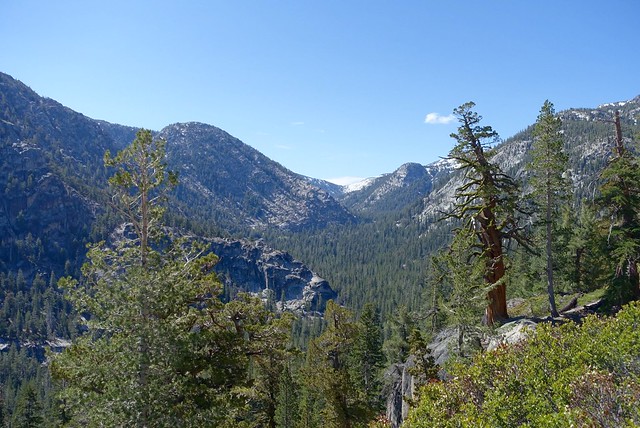 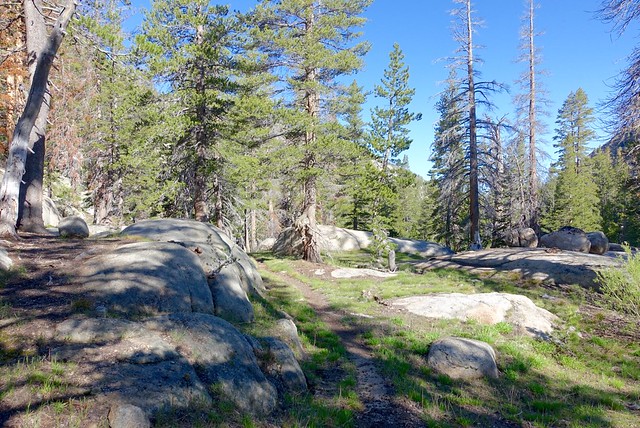 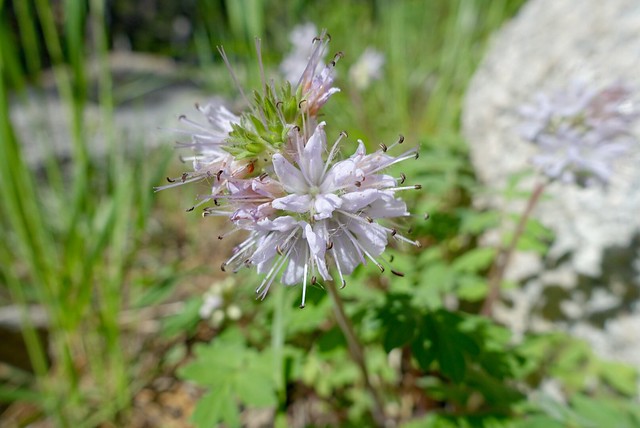 The trail started out fast, through volcanic terrain, down from the headwaters of the East Carson River where we camped last night. It was six miles, mostly downhill, and we made quick work of it, doing it in just under 2 hours. Then the trail climbed up some 500 feet and went along a granite ridgeline, then up and around. I can't quite get my head around how the landscape is laid out in this part of the Sierra. Sometimes the rivers flow north, then east, towards Nevada, sometimes north then west towards the Pacific, sometimes they twist and turn. I look at the map and read the topo lines, but the trail goes back and forth across saddles that I'm never quite sure if down is to the left or right of my northbound hike. 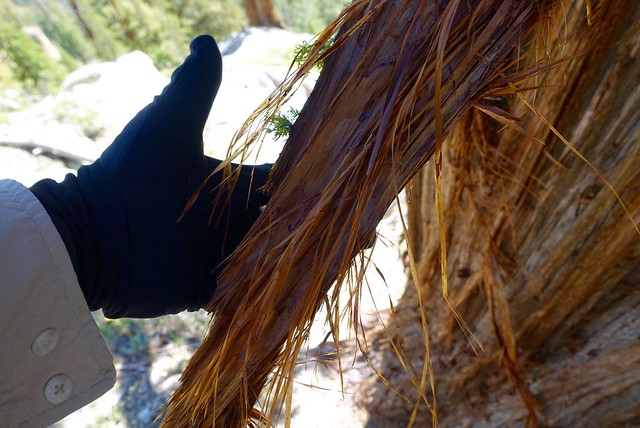 We stopped for a break at 10 and then at 1, and just after the 1:00 break around mile 1033 we ran into something not-quite-so-appealing: a cowpie. Drat. That means we have to pretty much start filtering our water. Neither Sage nor I have been filtering since around Mt Whitney, but we both have been pretty careful about taking water from small running creeks with snowmelt. Filtering does slow you down (we both have regular Sawyer filters), and it's a tedious chore to do when you're tired and get to a campsite. Yeah, you could do it in the morning, but who wants cold hands when it's just above freezing?

The granite stopped yet again in favor of basalt and volcanic rocks, and the mountains became rounded, not steep, and more open. It reminded me of parts of the Cascades more than the Sierra, and the PCT generally kept right around 8300 to 8600 feet. I went ahead of Sage as well; he was feeling the effects of five hours of sleep and was dragging. 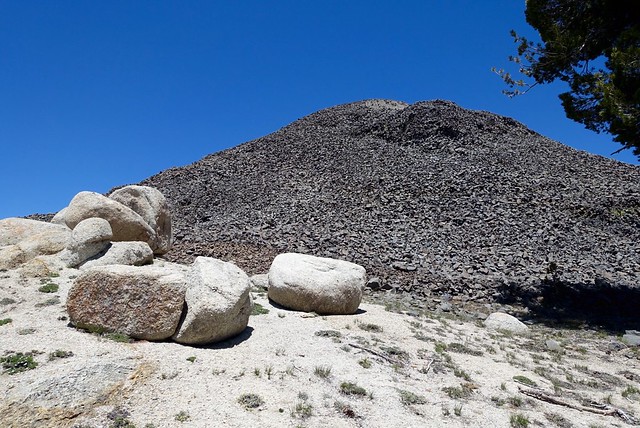 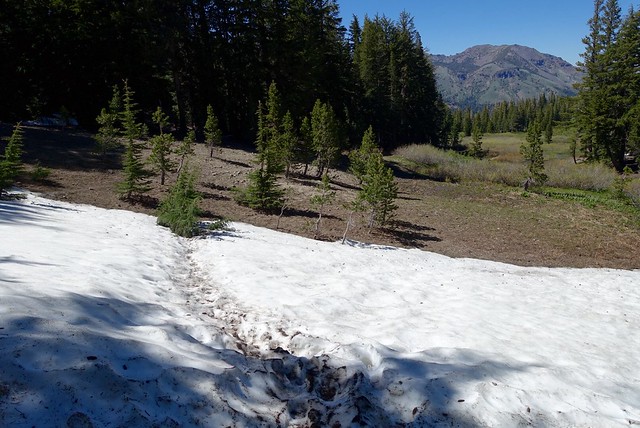 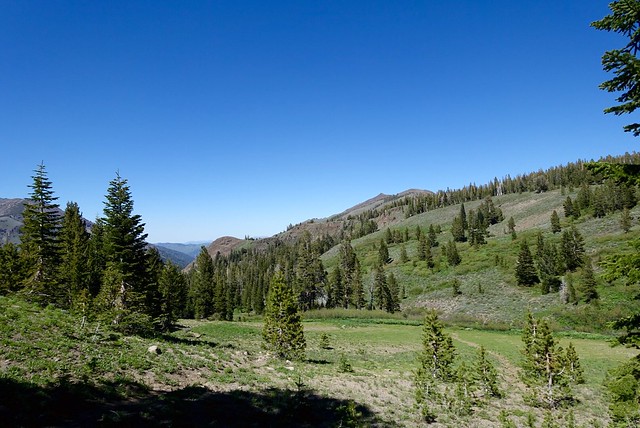 At 4:15 I stopped and rested, and suddenly felt exhausted. Drat, that lack of sleep is catching up with me too--and the last three miles to Nobel Lake are a 500 foot uphill ascent. Sage caught up and we decided to just camp at Asa Lake, which has a water source and is at the base of the climb. We arrived at 6pm, which meant we still had almost three hours of daylight left to do chores and make dinner and get to bed. 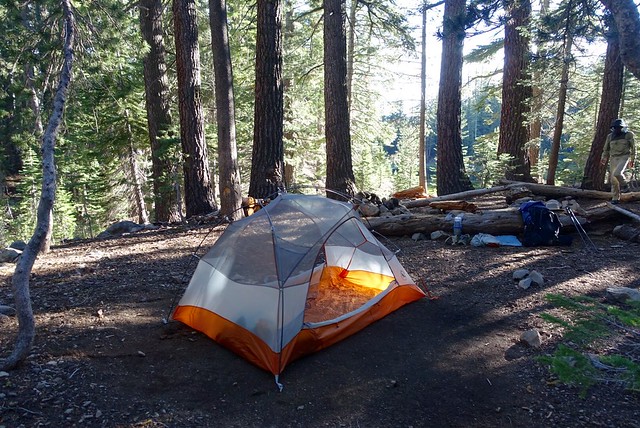 The campsite at Asa was very large--you could easily fit 25 tents around the multiple fire rings--and lots of tent spaces were already cleared of pinecones and rocks. There was a nice log seat, and even cut firewood, but best of all was a spring just down from the campsite, with cold clear tasty water spewing from under a rock. This made both of us happy, and we decided not to filter that delicious spring water. The evening was warm and dry--finally, I can cook my dinner outside!--and even more interesting was that there weren't many mosquitos, and a few dabs of lemon eucalyptus repellant kept them away. 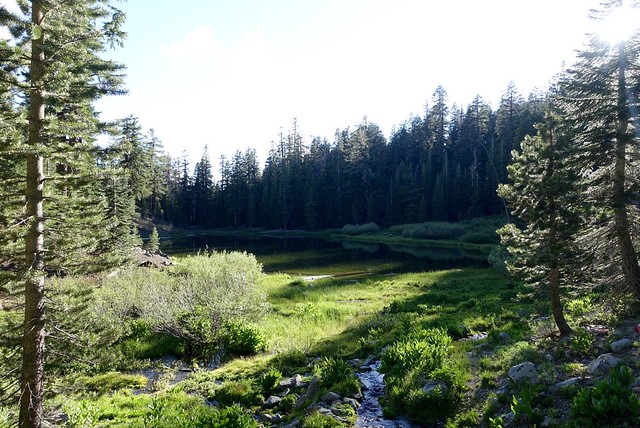 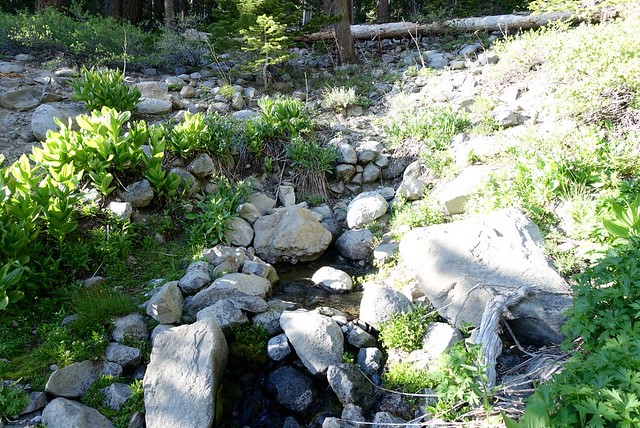 I am getting kinda worried that I'm not really going to have enough time to make it to Canada by Sept 7. It's still 1627 miles away. That's 87 days away, which means if I go without stopping I'll need to average around 19 miles a day. Of course I'll need to rest, though. Maybe I'll make it up by cruising through Oregon; I've heard it's easy to do 25 to 30 mile days there for some of the days, or maybe they'll be some wildfire closure and 100 miles of trail will be closed. It's still really far off in the future though--right now, I'm just interested in getting to Tahoe and enjoying the scenery and mighty fine weather.

< North of Sonora Pass Past Ebbets Pass and Highway 4 >