Crap! I bolted straight up at 5:45 and realized I was supposed to already be on the trail! I want to make it to the store before closing time at 5. Hurry, make coffee and pack and head out.

And I did head out, around 6:45. Why does it take an hour? It doesn't seem like it takes that long. I was on the trail, passing pretty lakes (we must come back here for a long weekend, Mammoth is only 6 hours from San Diego, and there are easy two to four day loop backpacking trips here). I dodged a few drifts of snow, before finally rejoining the PCT around 11 at the outlet of Thousand Island Lake, where the salad dressing doesn't come from. 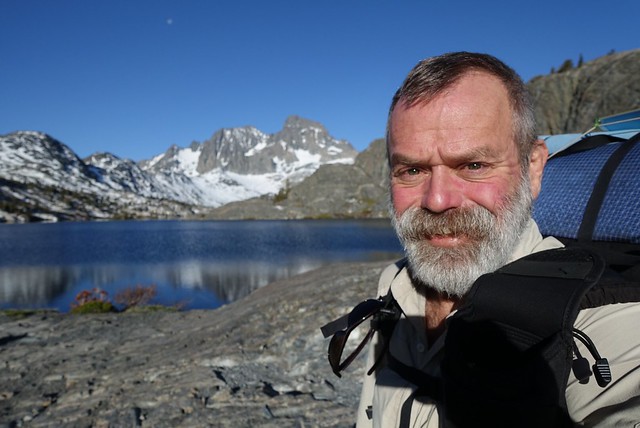 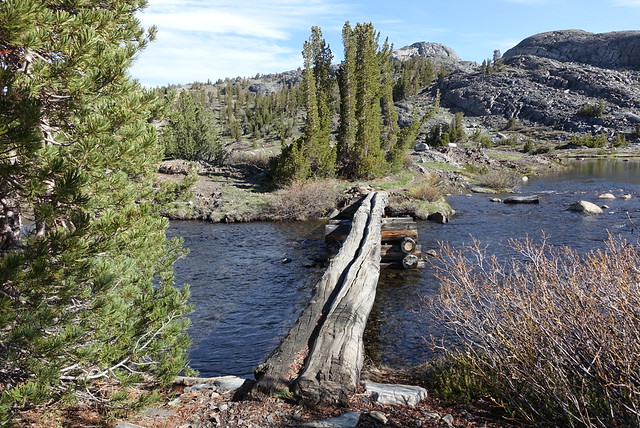 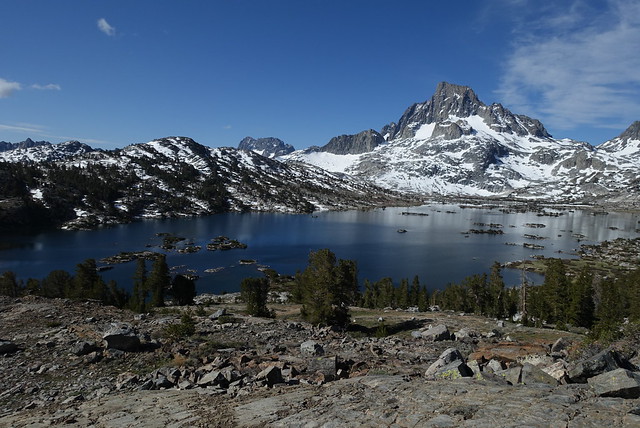 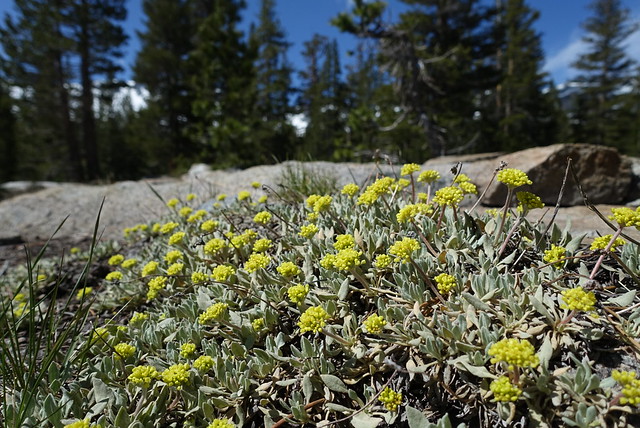 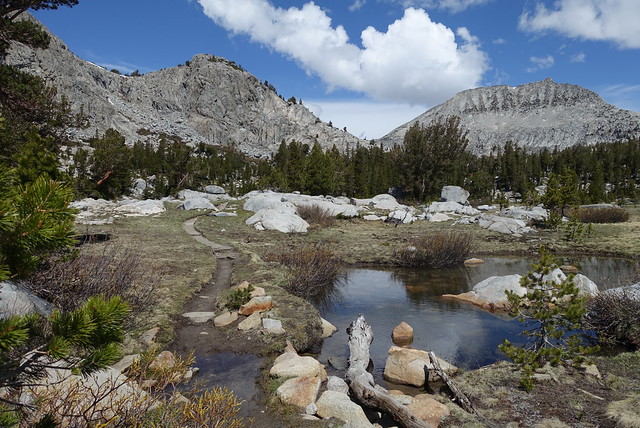 Donahue Pass was the big hurdle of the day, at just over 11000'. Once back on the PCT it still was another seven miles to the pass then 12 miles down to Tuolumne Meadows, and today I wanted to get there as quickly as I could. I didn't want to be caught in some thunderstorm up at the pass, which also could mean blowing snow and low visibility across the snowfields up there. 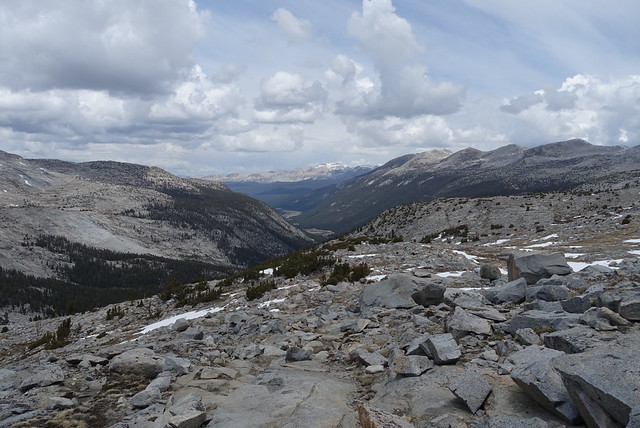 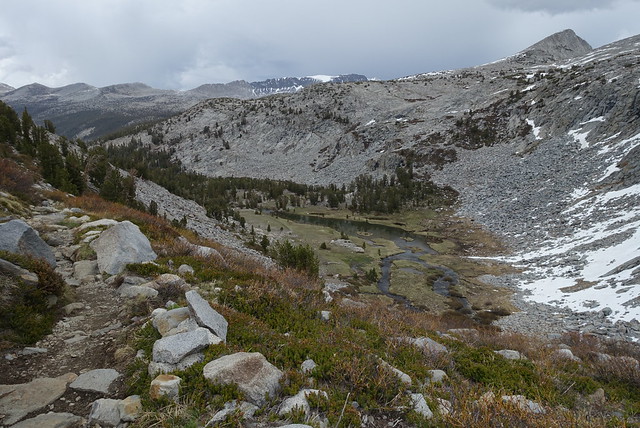 Dropping down from Donahue Pass, m930

That didn't appear to be a problem--though I did hustle up the pass, getting to the top at 12:15, the skies were blue with only a few puffy clouds here and there. Then in 30 minutes, the clouds took over. I had already scooted down the pass, wanting to get to the floor of Lyell Canyon quickly, and felt sorry for the dozen or so southbound hikers. Blech. 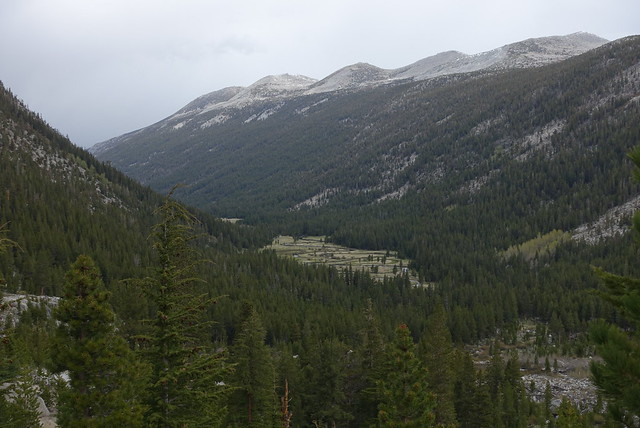 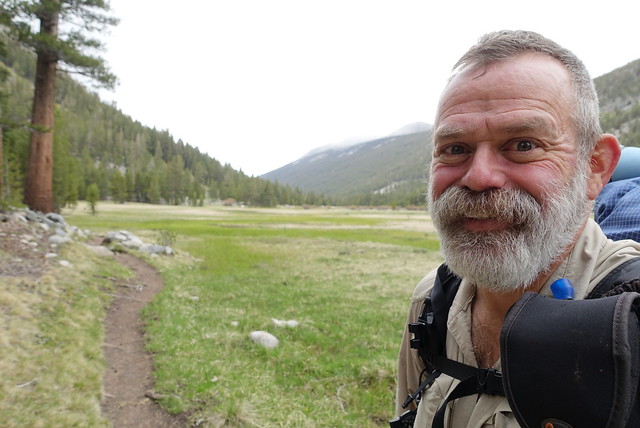 I realized by the time I got down to the canyon floor that I wasn't going to walk 10 miles in three hours, not with the trail in the shape I found it. The trail was mucky, muddy, filled with water. This just wasn't worth it, the store opens at 9am, and maybe I can get some brekkie at "the grill" next door beforehand, whatever "the grill" serves.

So I contented myself with walking my own pace, taking pictures of the very tourist-accustomized marmots begging for handouts, and trying to avoid as much of the mud and water as I could. 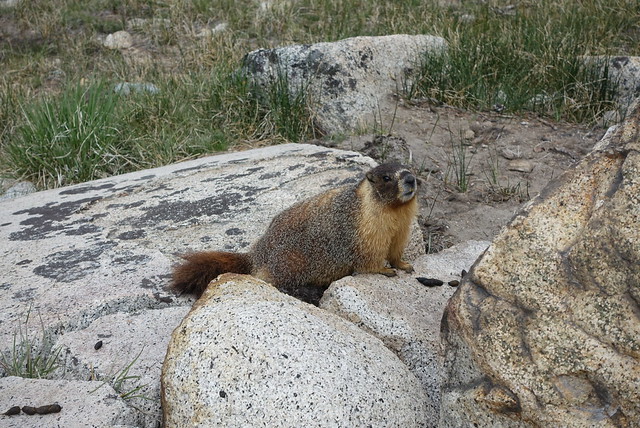 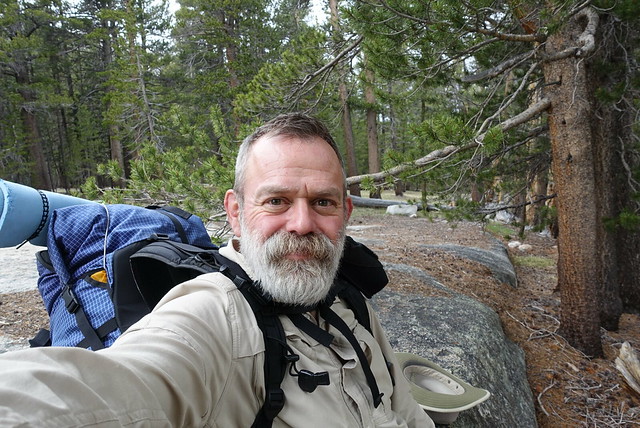 By 4pm, it started drizzling, so I pulled out my rain gear and put it on, accidentally leaving behind my warm-but-not-waterproof gloves. No big loss, I didn't like them all that much. 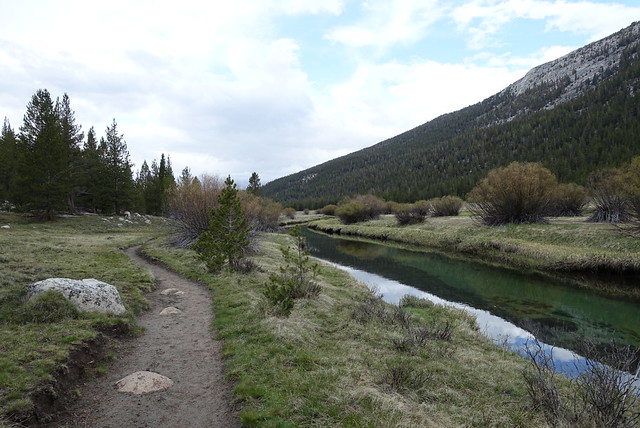 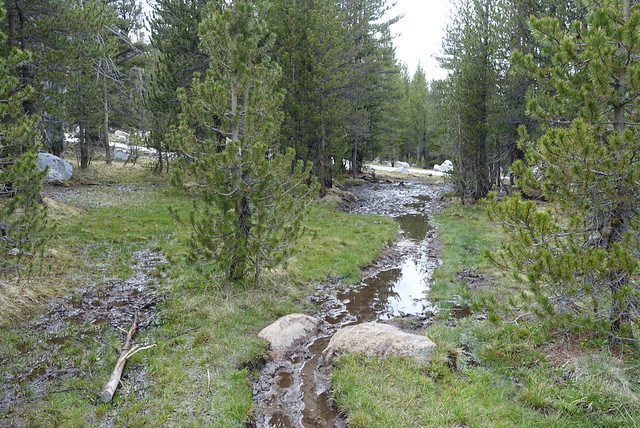 The trail just kept going and going--I remember this feeling from last year, the "are we there yet are we there yet?. Eventually I found the campground turnoff, headed past dozens of car campers (it is Saturday!) and went over to the store. Yep, opens at 9, grill opens at 8, there's my early morning. I called Chris, who just climbed up San Gorgonio Mountain today in southern California, yay. Go bear go! 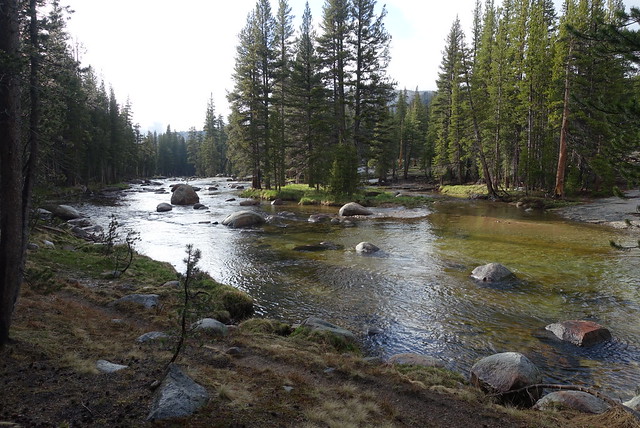 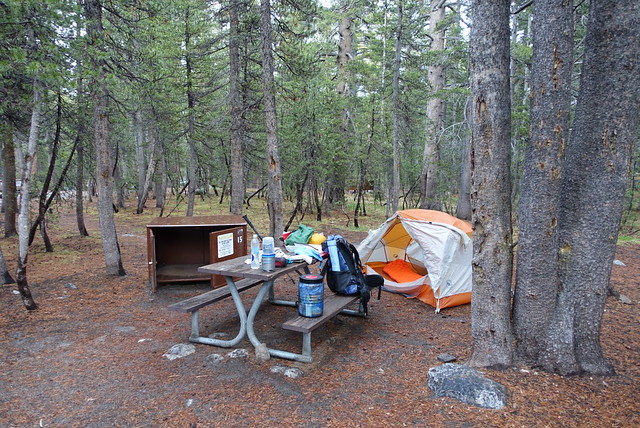 Then I wandered on back to the backpacker's camp, meeting Rebo for the first time, and a few other hikers. It started raining, I was too tired to make dinner so I snacked on string cheese, buffalo jerky, and mixed nuts... then headed to bed. It's been a long day.

< Towards Tuolumne Meadows To Miller Lake >