dan.marmot.net
< Bonus post: Cottonwood Pass To the base of Forester Pass >

Arriving in the High Sierra on a warm spring day.

Stopping early last night really refreshed me--I woke up alert and ready to go at 5:30 when the skies started to lighten up. Of course I wasn't ready to go, though--I had to make coffee and a two-fer oatmeal (it's not going to eat itself) and pack up. It took awhile for the sun to come over the hill, and I wanted things to dry out a bit.

I had put a mylar Space Blanket over my feet to see if it would keep them warm. Yep, it sure did keep them toasty warm, unlike almost every night on this PCT journey (and a lot of nights at home--that blankie on the end of the bed isn't just for Fred the cat), and it also left a sheen of water on top of the sleeping bag, not a good thing for the down stuffing. So I yanked the sleeping bag out of the tent onto a nearby rock to dry, and spilled the last of my coffee on the tent floor. Doh! So much for keeping my tent 'unsmellable' for the Sierra bears.

It wasn't until 8:30 when I finally got on the trail, and it was oddly warm--I didn't even start out with a jacket, just that not-so-clean white long sleeve shirt and hiking pants that have been my standard uniform since leaving the border five and a half weeks ago. The sun was pretty intense and I was out of sunscreen, so I borrowed a few dabs from Joko. Must remember to buy more in Lone Pine. I have a little sunburn on my cheeks and the side of my neck, but nothing too bad, looking at some self selfies since there's not exactly a handy mirror.

We set out on a leisurely pace, Joko a bit ahead of me, and I caught up with him at Cottonwood Pass, just a couple of miles. 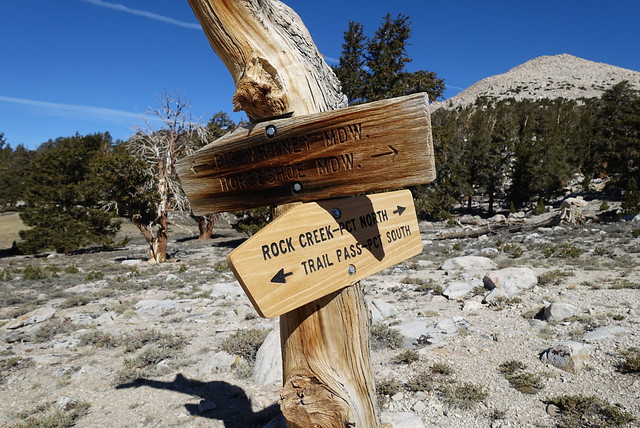 The scenery was changing, with broad vistas to a western range of mountains with just a bit of snow on them, large meadows, still tan and not green at all. I guessed that I could get cell phone service at the pass, and yep, I did, so I checked the weather discussion for the area from the NWS Las Vegas office, which was "warmest days so far in 2015", though with maybe a bit of cloudiness in the afternoons in the High Sierra. Sounds fine--and works well. Today and tomorrow we'll be scooting up to the base of Forester Pass, then bumping on over early on Thursday morning, 2 days from now. I took advantage of the really decent cell phone connection to upload a few pictures; it's one thing to describe the lack of snow, and another thing to see how little there is up here. This really feels more like late June. 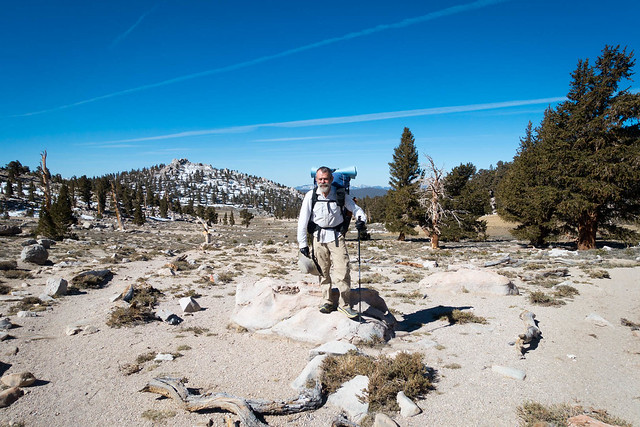 Our next stop was for water at Chicken Spring Lake, just a mile away at mile 751. 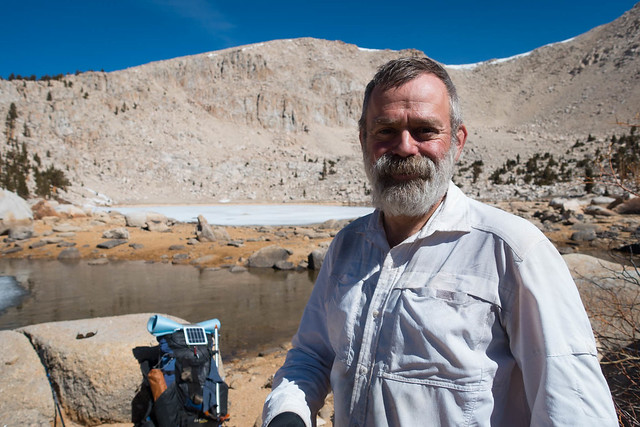 There was water flowing at the trail, and Joko filtered a bit; I walked up the 100 meters to the lake to check it out. Hey, it's a lake in a cirque! That's very High Sierra, and I really finally did feel like we were in the high country. The lake was half iced over, the other half was open water near the shore, or clear ice... and it was rather shrunken as well, with no water flowing downstream on the surface. The lake seemed really shallow too--I wonder if it'd even last the season, seemed like it might be completely dry by August, over three months away, if not sooner.

There hasn't been much wildlife to speak of since leaving Kennedy Meadows--maybe because water has been a bit scarce--but at the lake there were plenty of chipmunks scampering around the boulders and scrub willows, just starting to leaf out. We've heard the standard jays in the trees as we've approached them, sending out their warning signs, and I've seen woodpeckers as well.

The oddest wildlife we've encountered is something we haven't seen, but only heard. We first heard it back at Cow Creek, mile 719, and we're still hearing it. At first we thought it was some weird water gurgle of the creek--it sounds vaguely like a gently tap on a piece of hollow bamboo, the sound reminds me strongly of the water fountain sound in the snow scene in Kill Bill Vol 2 with Uma Thurman and Lucy Liu. If you didn't get that reference, think of a gentle tapping on a wooden bongo drum. The noise repeats five times (sometimes four, sometimes six, never seven or three) somewhere off in the woods: bonk-bonk-bonk-bonk-bonk. Then silence. We've heard it in creek canyons, in high foxtail pine forest, in pine and sagebrush flats. What is it? I'm guessing it's some weird bird mating call, some ground bird that you almost never see, like a grouse.

After Chicken Spring Lake, the scenery just got better and better--and around mile 754 it suddenly opened up at an overlook, looking down on the wonderfully named Siberian Outpost and then north to a few big ridgelines far above treeline, with forested valleys spilling down from the mostly bare granite heights. It was a wow moment, and a few steps later the PCT entered Sequoia National Park. 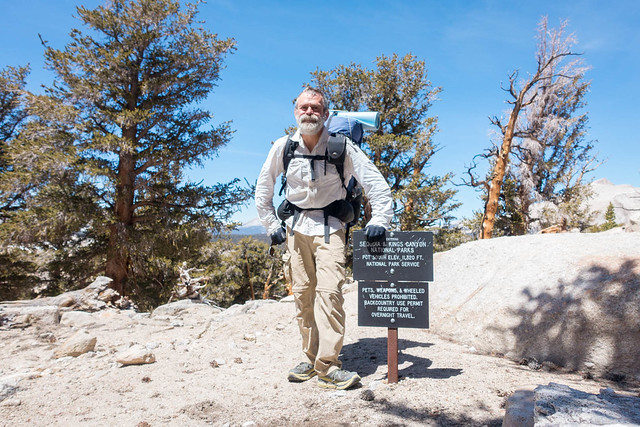 It was cruise mode alongside Siberian Outpost, which is really a large flattish area that's not quite a meadow, and probably just one of those odd spots that collects all the cold air so trees don't grow much there--though the PCT did walk through an open woodland of foxtail pines that was wonderful. At mile 757, I looked to the east and spotted what I think was Trail Crest on the Whitney Trail. I remember that section well, from Trail Crest north to the summit of Whitney, about a mile or so. The trail runs right along a very sharp ridge with huge views to the west and a few windows east, it's super scenic. It's also right at 14000', and each of the three times I've gone up Mt Whitney it's where I've told myself "OK, I don't need to do Whitney again" as I gasp for oxygen and take breathers every 20 or 30 steps. 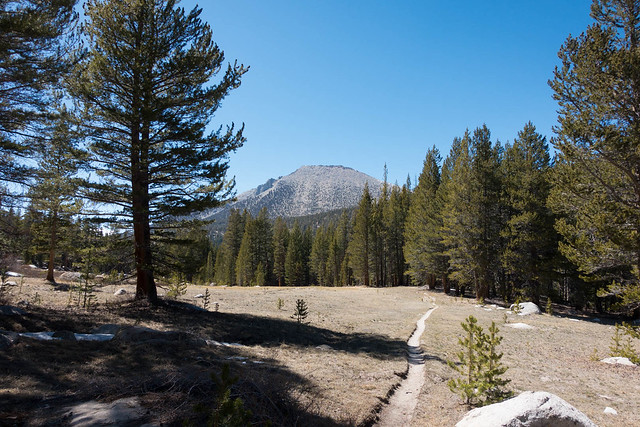 The trail dropped sharply down to Rock Creek (mile 760), running low and clear, and we hopped across on a few rocks--the creek was all of 8 to 12 inches deep, and maybe ten feet wide. Not quite the "first tricky ford of the Sierra", but I'm sure we'll get a few. It was getting to be 4:30, and time to think about camp... but we had a few more miles to make, so we slowly trudged up the sharp steep trail away from Rock Creek, then crested at 11000' and dropped down to Guyot Flat for the night. Both Joko and I were finished; not quite exhausted but definitely tired. We made dinner in the rapidly cooling evening, ditched our bear canisters out away from camp, and retired to our respective tents. 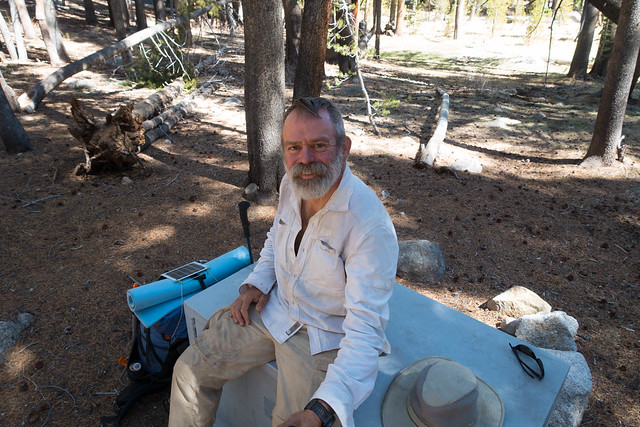 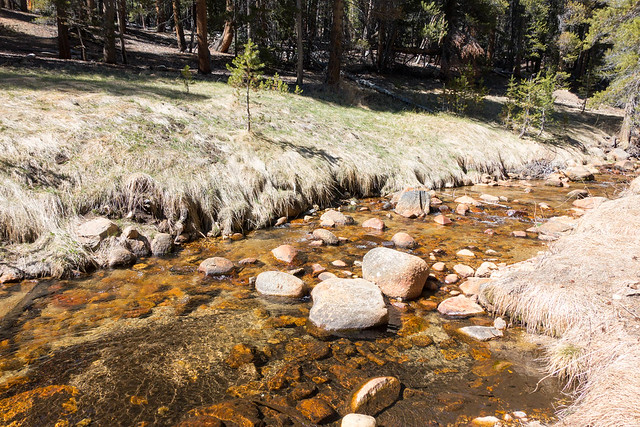 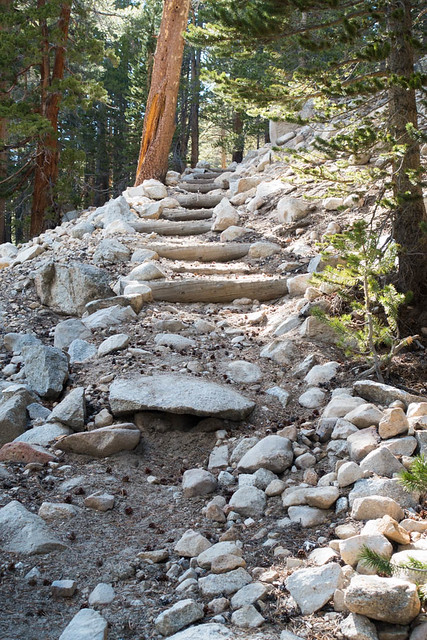 It was only 15-ish miles today, but these miles aren't very easy to make. We are really happy, though, that we're mostly free of water worries. No more carrying 4 1/2 liters for quite awhile, yay! We can even do things like use extra water for washing feet, or rinsing out towels and the like. I realized that I really was obsessing with water a few days ago when I asked myself "do I really have enough water to brush my teeth tonight, or should I wait?" Well, now I can actually brush my teeth every night. 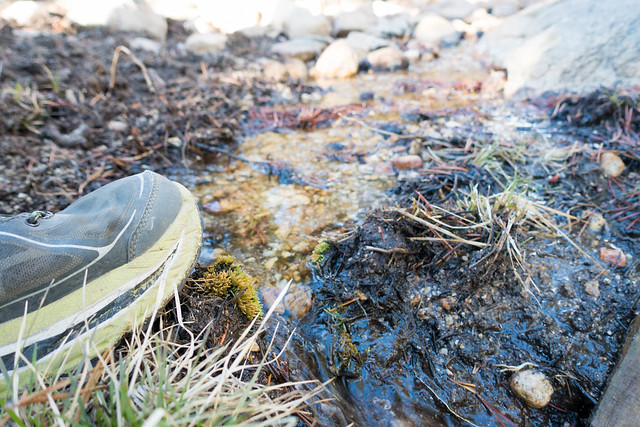 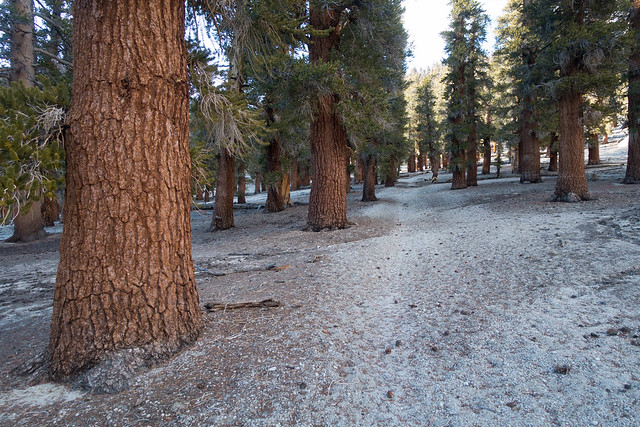 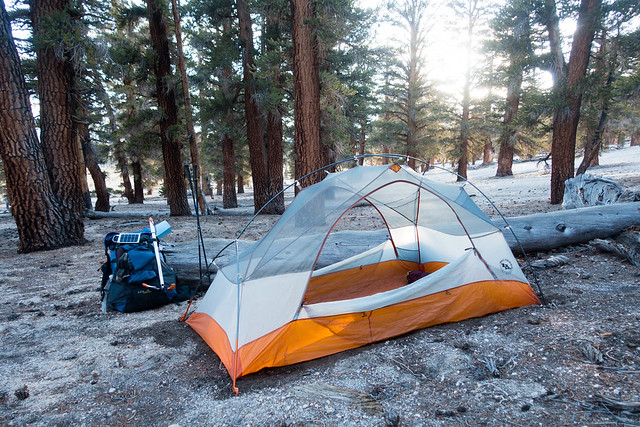 Tomorrow will be about the same for miles, but the altitude will be even more difficult. Gotta take it slow and easy and get my rest tonight, and hopefully find camp a bit earlier than today in case there's some late afternoon sprinkles at 12000'.

< Bonus post: Cottonwood Pass To the base of Forester Pass >