dan.marmot.net
< Zero in Lake Isabella Through the thunderclouds >

A mighty fine day--sunny, warm but not too hot, lots of wildflowers. 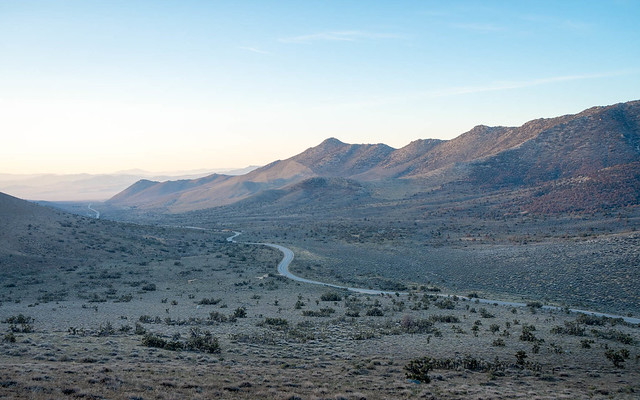 That alarm went off far too early, at 4:20am on this day, 4/20 (dude, double 4/20!) I was feeling bouncy last night after I finished packing and couldn't sleep--that 1 1/2 hour nap at 3pm probably had something to do with it--so I watched more Game of Thrones, thank you HBO Now.

It wasn't until 10:30pm that I turned the lights out, giving me just about 6 hours of sleep, but that's fine. For some reason when I'm out here on the PCT I haven't been sleeping very many hours, rarely 8 and more often 6 1/2 to 7. I haven't felt tired the next days, or more cranky, or anything... most of those days after not-so-much-sleep have been good to excellent, and today was excellent.

After doing the last packing and a last check of the motel room, I walked over to the Kern Valley Senior Center to catch a bus back to the PCT. It's fantastic that they started this service a few months back; it really makes Lake Isabella a viable resupply stop (though I think Kernville is even better from a hiker perspective and more charming and walkable; it's at the start of the bus line.) I was thinking about the bus options; you could even just get the morning bus into town, do your shopping, then get the late afternoon bus back to the PCT. The only catch with the bus is that it's Monday-Wednesday-Friday only,

Anyways, Jessica the bus driver was friendly, and she welcomed me and three other passengers on board at 5:15am; they were going to Ridgecrest. I was simply going to Walker Pass, and as we all boarded I spotted a little of Chris Glass's work on the bus next to the door, that recovery.gov circular logo. Seeing his logo always makes me smile, and today was also bonus 'gods-must-be-smiling' moment, as I'm starting section G of the PCT (G, Glass, get it??)

An hour later and 37 miles down the road I got off in the cool morning air, just as the sun was rising. I vaguely knew what was in store for me: the PCT has a certain profile that you get to know after awhile. I'll be taking off from the pass, ascending a few thousand feet, leveling off at cruising altitude on the ridgeline, then descending in six to ten or twenty miles and touching down at another pass or saddle, then up again. The rhythm has been pretty much the same, though it'll be changing soon after Kennedy Meadows as the PCT heads into the High Sierra and stays up in the 7000 to 10,000 foot elevation range, with high passes interspersed every 10 to 15 miles or so.

One of the reasons I've been feeling good is that I feel like I'm prepared for those high elevations. It's still very early season, and though the past few years have left an exceptionally low and dismal snowpack, it'll still be cold at night and cool during the day: no snow does not mean no cold.. I know I sleep cold, so I bought a foam sleeping mat at the hardware store and cut it in half. I also bought one of those mylar space blankets to wrap around the foot of the sleeping bag to keep my always-cold feet warm (I'm going to try my rain kilt first, though, come to think of it.) At Kennedy Meadows I'll also be recieving some fleece leggings to wear at night (and bear canister and ice ax, but those are expected. All of this will get tried out over the next week, and if I don't' like the gear I'll just leave them when I resupply in Independence before heading back on the PCT for the 100 mile walk to Mammoth. 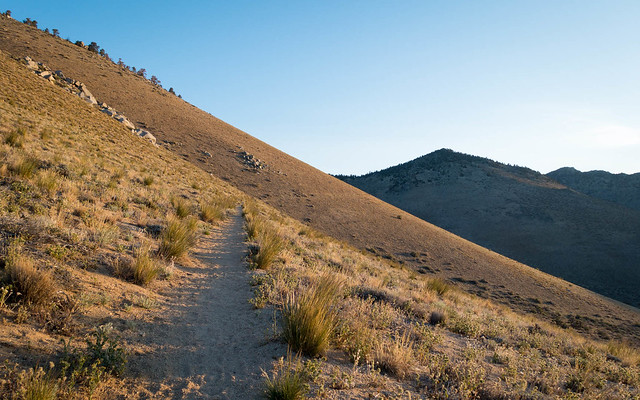 Back to today. Yep, the trail went up and up and up, but it was cool and I'm really liking the "start early" thing, rather than what I've more often done, which is laze in the sleeping bag because it's warm and toasty. Starting early means I don't feel rushed during the day, I can scoot off trail and take pretty pictures, or not have to hurry through a break or a water filtering excerise. I took it real easy today to see if my right leg would act up; it felt normal all day without even a hint of soreness or tightness. The zero day yesterday really helped, I also added back the Superfeet plastic heel cup that I took out after some painful blisters appeared a week ago.

The scenery was pretty good, climbing up above Inyokern with big views out towards China Lake, and the plants were starting to get more diverse too; I saw a sugar pine cone, which I hadn't seen since Big Bear, and a few new species of wildflower appeared, like this pale blue delphinium with fuzzy leaves, and a magenta onion-looking flower, things like that. I took pictures and will identify them later. There were lots of dead trees though, in some places more than half the pinyon pines were brown. Drought and bark beetle, I presume. 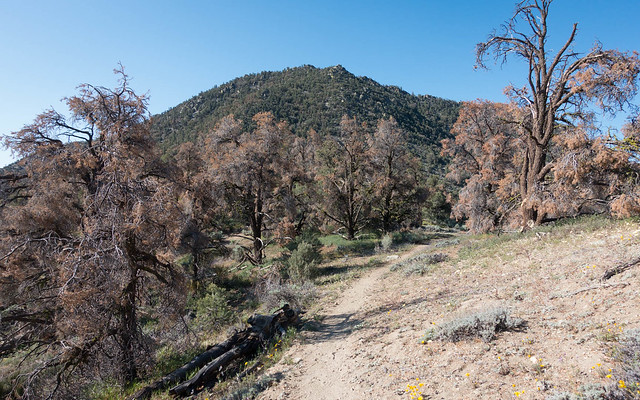 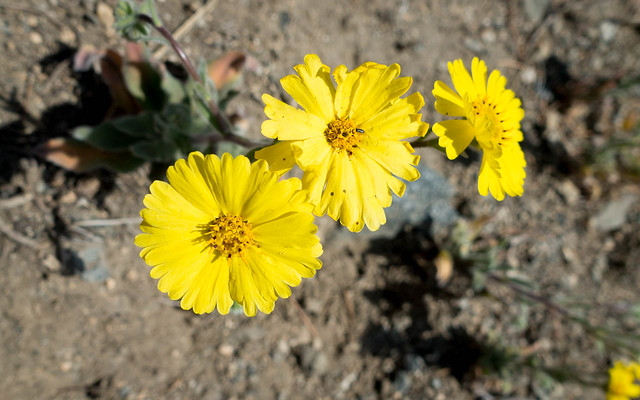 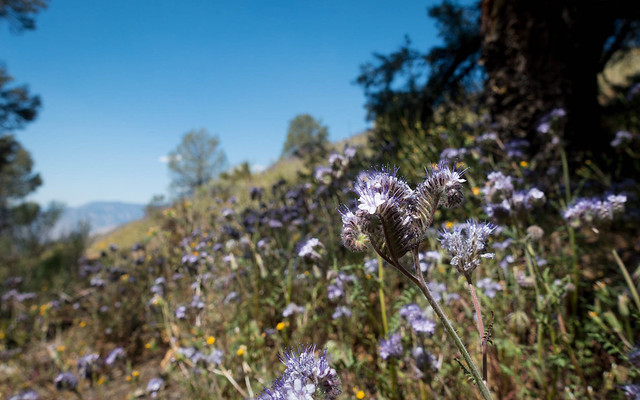 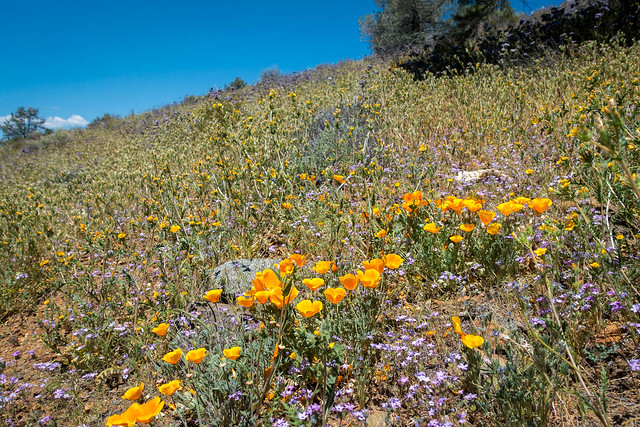 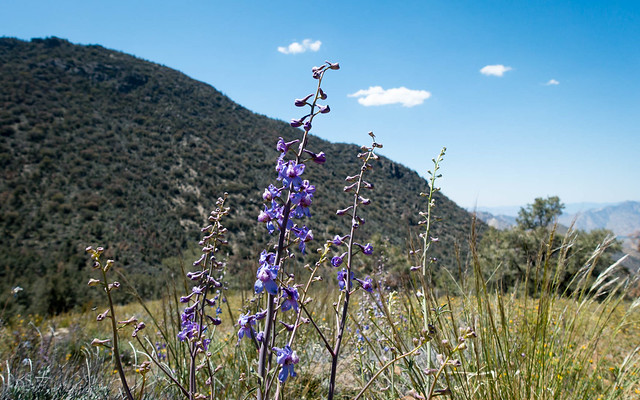 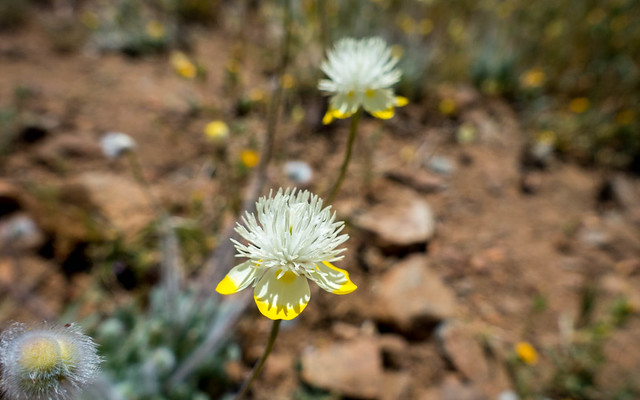 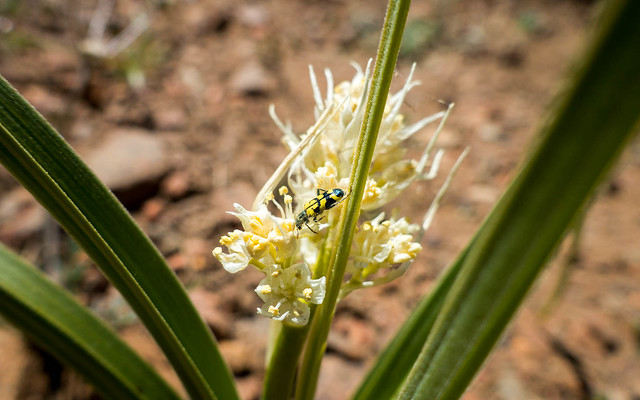 At lunch, I filtered water at Joshua Tree Spring, and left quickly when the gnats discovered me. First time that's happened so far. A few miles further, I filtered 2 1/2 liters more at a Spanish Needle Creek crossing that was barely flowing (I got to use my scoop finally!), and the mosquitoes and flies joined the gnats in buzzing around my head--not to mention the ants that crawled up my backpack, so when I put it the ants that didn't immediatly get crushed got a bit angry and started biting all at once. I squirmed my pack around to crush those little buggers. Must be more careful where I set things down. 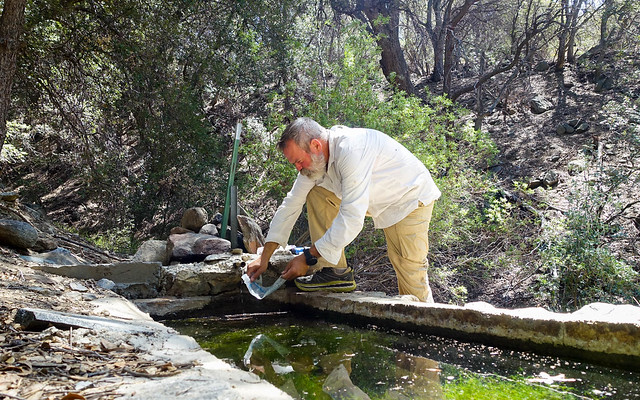 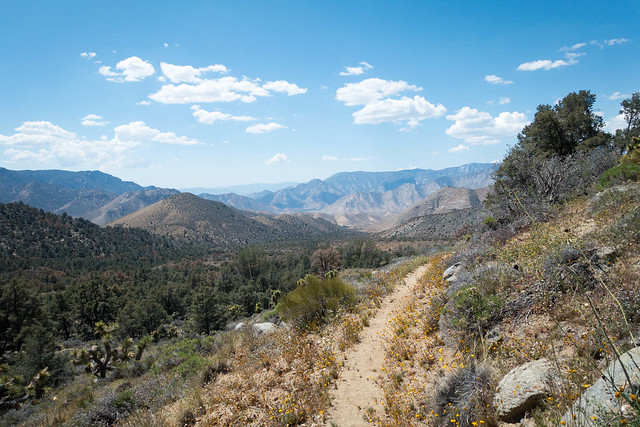 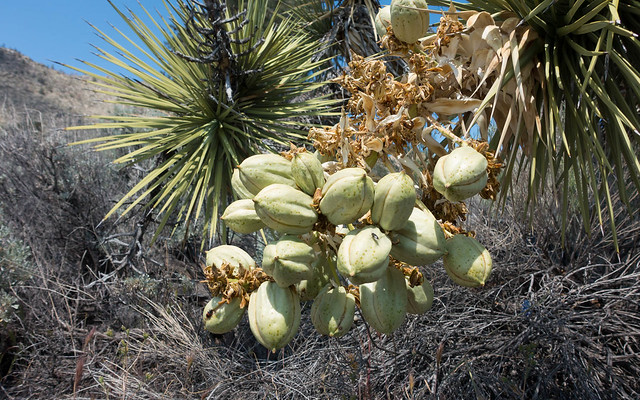 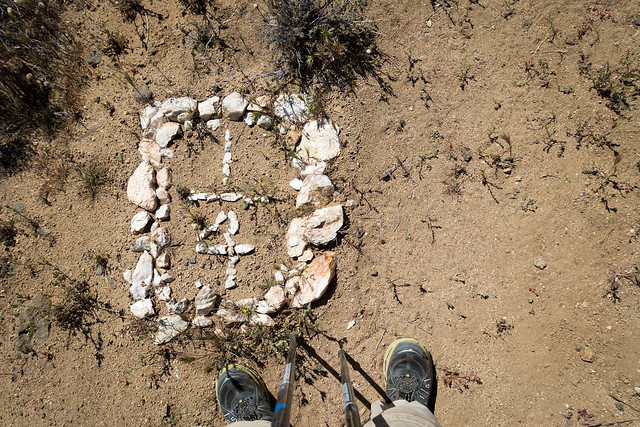 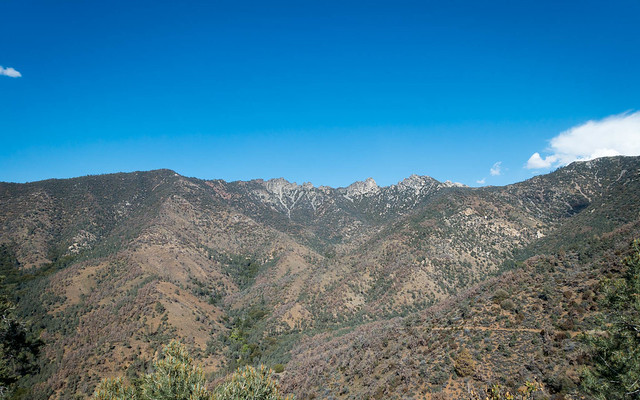 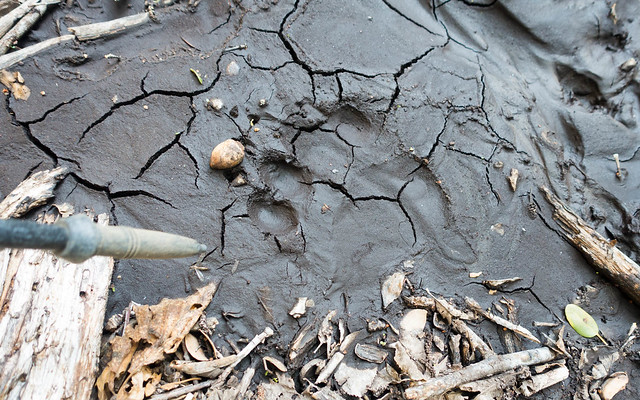 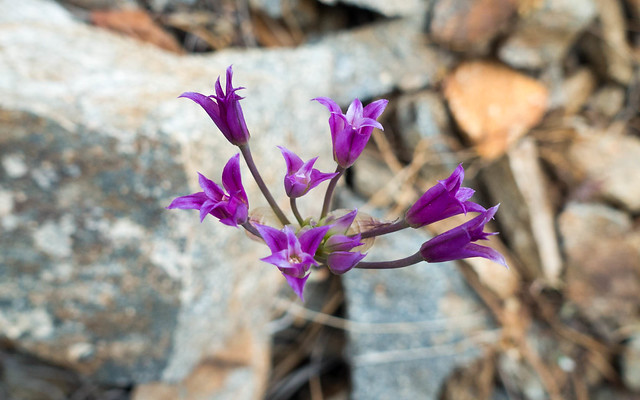 Finally, since I'd been walking since 6:30, I called it a day early, which was around 6; I put up the tent and then quickly put up the fly when I felt a few sprinkles. I'd gone 18 miles, not a lot of miles, really, but there was a lot of water filtering today and I'm deliberately going at a slower pace. I should be good to go until mile 590-ish with water, and there are two more likely water sources tomorrow. It's 32 mies to KM from here; one and a half to two days of walking. I'll start early in the morning to make my miles, so that if thunderstorms do start happening--it clouded up today and sprinkled a bit around 7--I'll can just pull over and camp and not worry about making the miles up the next day. 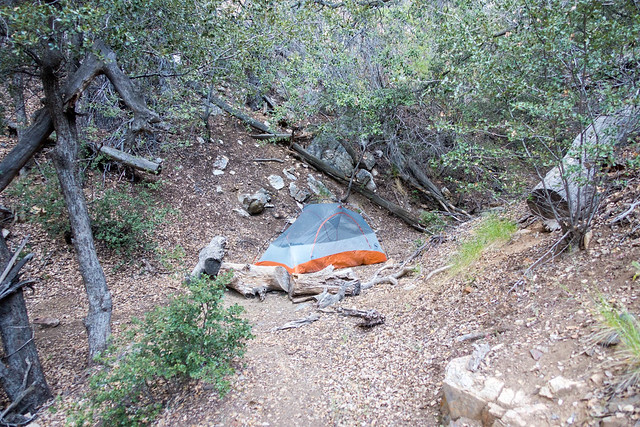 < Zero in Lake Isabella Through the thunderclouds >