A grind of a day through the sand and shadeless desert.

Brrrr it was cold last night. I thought it was going to be a mild night, since it was so warm when I stopped. I was wrongI slept poorly; my feet were really cold (they're almost always cold) and I looked at the thermometer around 11. It read 31 degrees, I said "crap" and found my water filter and stuffed it down in the bottom of my sleeping bag since it can't freeze. Sleeping with Sawyer, again. If there's one surprise I've had on this journey, it's that it's colder than I expected. 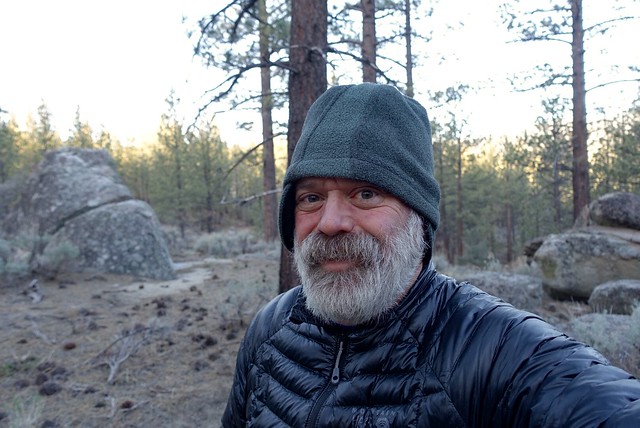 About 3 I said "enough" and put on my down jacket and slept in that. The temperature in the tent had dipped to 24, which is what it was when I did a snow camping clinic in Tahoe back in February. Outside the temperature was 20... just what my sleeping bag is rated for. I slept OK after bundling up in my jacket, but my legs and feet were still a bit cold, and I could feel the cold of the ground coming up through my sleeping pad. Landers Camp, where I was staying, is at 6500', and I said to myself "hm, it's colder at higher elevation." Time to think about getting a bit more insulation under me; I slept great when I was camping on the snow in Tahoe on top of an inflatable plus a Thermarest. I should check out getting one of those old-school foam sleeping pads in Lake Isabella and cutting it down to size and taking it up into the High Sierra. I can always ditch it when I come out in Independence if it doesn't work and if I don't want to carry it all the way to Mammoth.

Anyways, my shin felt fine. I'm a bit puzzled by the leg soreness. It's happened three times now--the day after Agua Dulce and a 3 1/2 mile road walk, the day after the ten mile walk on the hard concrete aqueduct, and yesterday's flare up. The other days I've felt fine. It seems to be kinda related to walking on hard surfaces, and since its lingered for about a week now I'm thinking it's less acute and more of an 'overuse' injury. I'm going to take it a bit easier... after the next two days.

I've decided really wanted to see if I can get to Lake Isabella in two days and take a full day off. It's fairly decent as a resupply, with the motel and a Safeway (erm, Vons) and there's also a public bus back to the PCT on Monday, thank you Kern County Transit. I'll get a hitch from Walker Pass the 37 miles down the valley to town, which shouldn't be hard; there's not really any other towns along the way.

Water for 43 miles is the big concern. I know there's no water from mile 621-ish (Willow Spring) to Walker Pass (mile 652), so that's a 31 mile carry, or six liters. It's 12 miles to Willow Spring. I decided to carry six liters from Landers Camp, it's downhill for the morning, then a bit of up-and-down in the afternoon.

I didn't want to hang out in the tent in the cold, so I packed quickly and was on the trail around 7:30. It was cold, below freezing cold, then after a mile the heat turned on, the trail turned east into the rising sun and headed through a recent burn area. The temperature zoomed from the 20s into the 50s really fast, and I changed desert hiking clothing mode:
white longsleeve shirt, unbuttoned, long pants. I didn't particuarly want to sweat much, and it was a bit chilly but it would get warm soon enough. 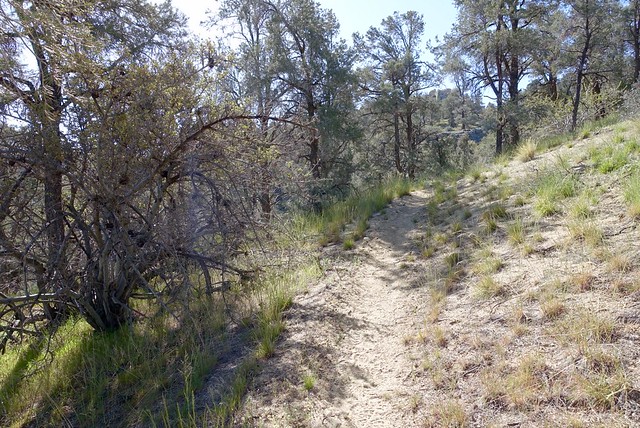 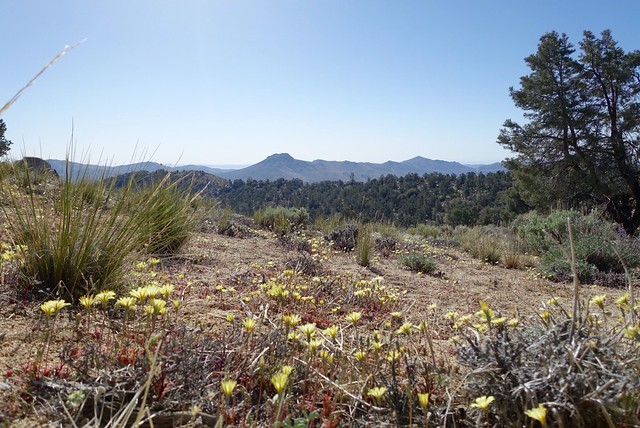 And oh man did it get warm. It was a nice gentle grade, downhill downhill downhill, to the Kelso Valley Road, and the trail lost the sparse shade of the pinyon pines as it descended. There was a small cache of water at the road--maybe 12, 14 gallons--and I thought "should I take some and avoid the Willow Spring detour and save a mile?" It's still 35 miles to Walker Pass, I've drunk a liter this morning... I took a liter and a half, making my carry 6.5 liters. It wasn't as heavy as the load I hauled up from Highway 58 in Tehachapi, but it was heavy enough. 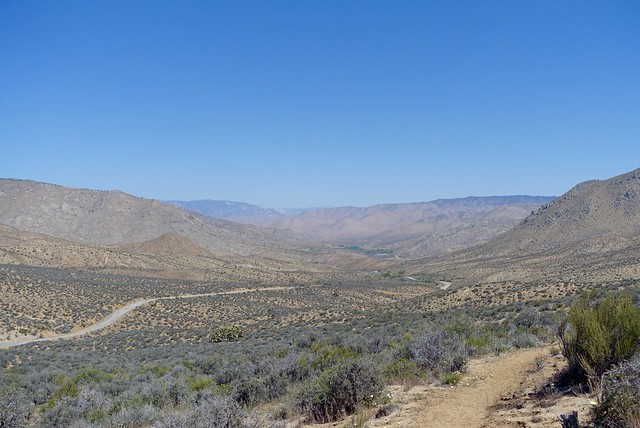 Looking down to Willow Spring, m620

The next 15 miles were the most unappealing so far; forget what I said about Section F not being bad yesterday. The trail trudged uphill and downhill, often through deep sand, and through what could be charitably be called "Joshua Tree Woodland." No shade, temperatures in the mid-80s, and I was very glad to be walking under my umbrella. This'll be a tough stretch for the herd of PCT hikers coming through here in a month, when the temperatures are in the 90s and above. 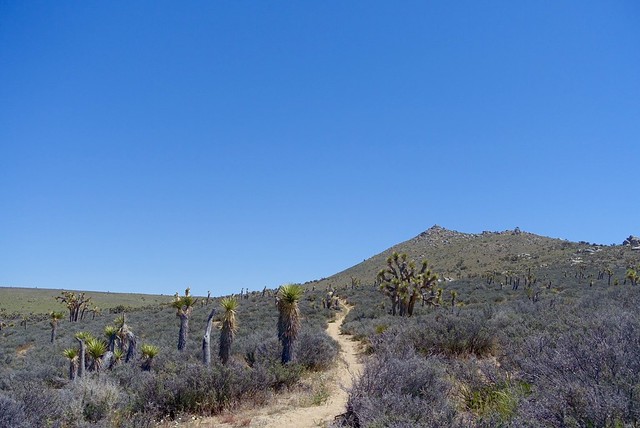 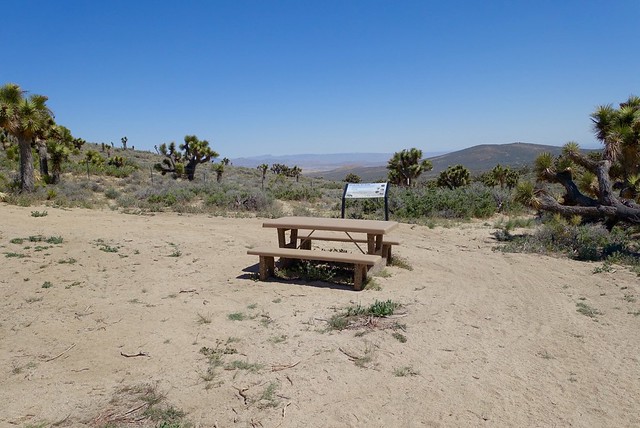 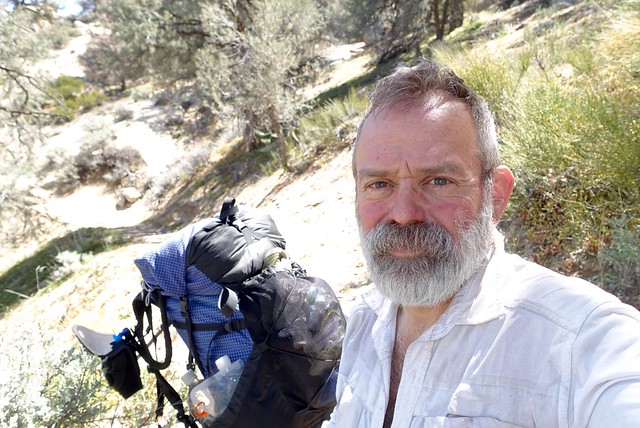 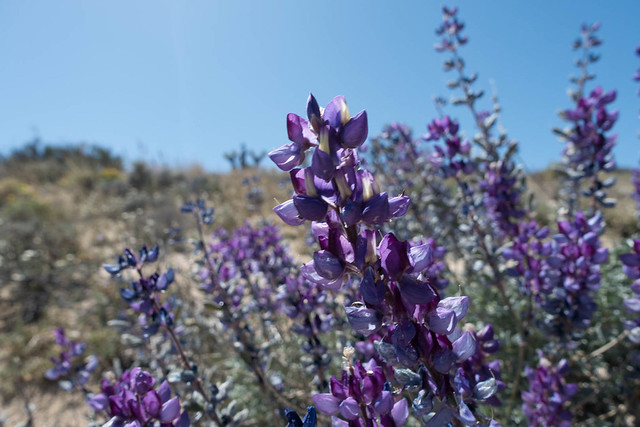 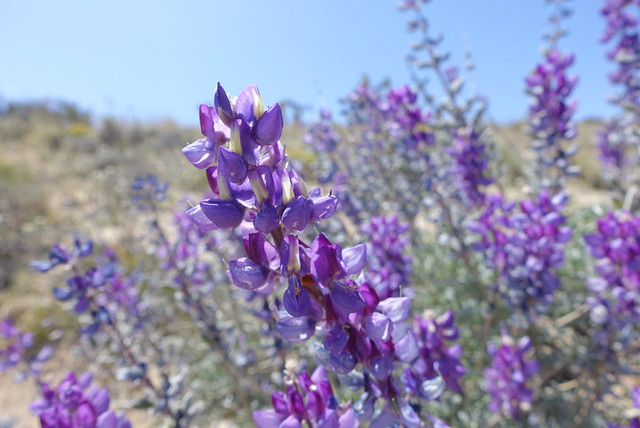 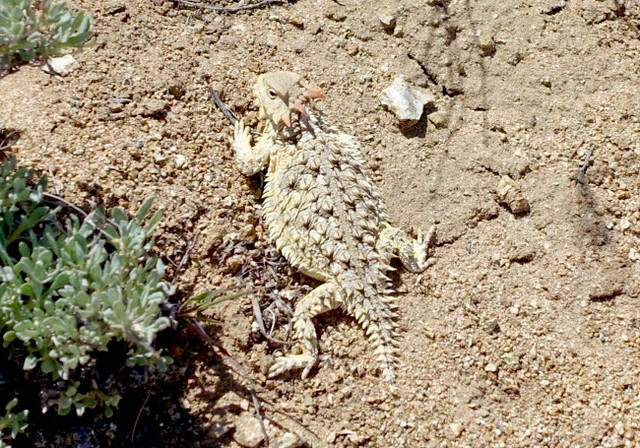 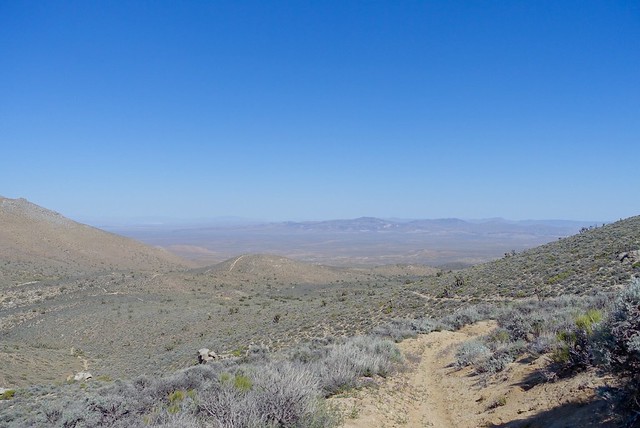 The wind picked up around 3 as well, and the temperatures dropped, but it wasn't some pleasant breeze, these were harsh gusty blasts. I chose to push on to Bird Spring Pass--there weren't many other choices--and ignore the mileage, just get it done, and this section over with. The trail rises 2000' in the miles past BS Pass, and I was not going to do that after a long day. Better to find some campsite, hopefully vaguely level and somewhat out of the wind, then ascend up when I'm fresh in the morning. 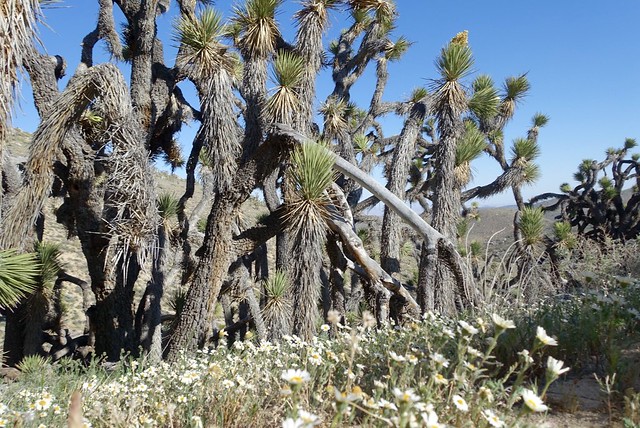 I did make it to the pass, right around sunset, and was disappointed that there weren't "numerous campsites in the boulders east of the pass" as the Guthook app had mentioned. Sure, I could walk half a mile east, but that's not at the pass. Grrrrr. I was in a very foul mood, so I just said "screw Guthook" and started looking under Joshua Tree clumps for a campsite; I'd noticed that cattle often lay down in their shade during the heat of the day, and hoped I'd find one that didn't come with too many bonus cowpies. I got lucky and found a decent campsite at the first clump I investigated, set up the tent, and crashed for the night, happy that the Desert Death March might be done. I'm hoping tomorrow's higher elevation walk will be cooler and shadier, and not so much of a slog.