A varied day of desert and mountains and wind. 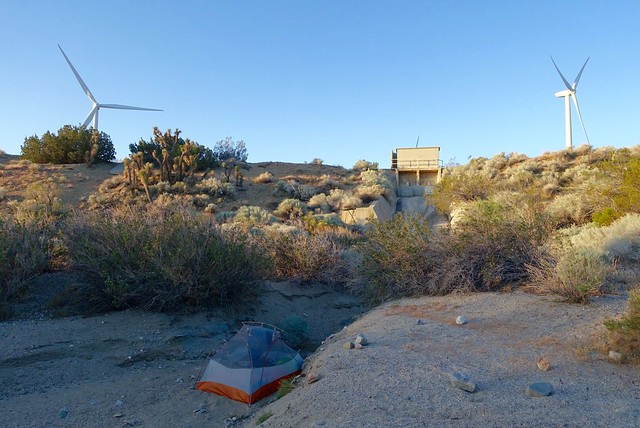 Camping in the infrastructure, m534

Even though I fell asleep after midnight, I wasn't up for lingering in the tent. At 6:30 I was up and figuring out what to do for the day, looking at maps. I could camp at some flattish places near mile 550 to 554, up around 6000 feet elevation and on a likely windy ridgeline. Or I could just hump it and make it to the road and Tehachapi. Then I decided to look at water: yep, just one stop today, in Tylerhorse Canyon at mile 541. I spent far too long deciding and packing, and it wasn't until 8 until I headed out. The other guys were just getting out of bed as I walked by, and I told them I'd probably see them up the trail at the water stop, which I did. 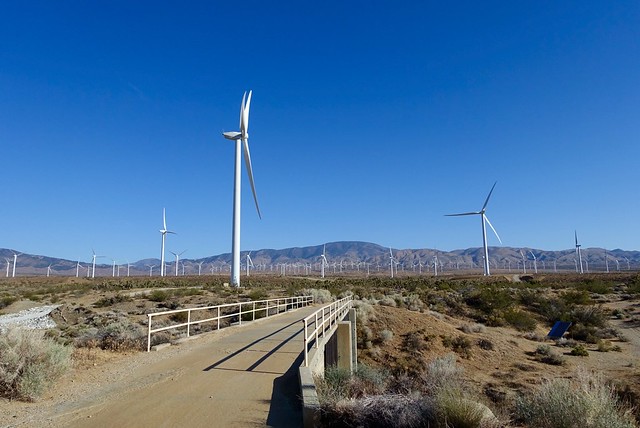 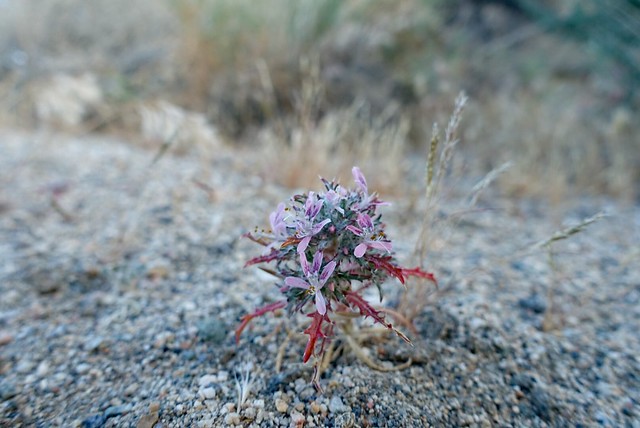 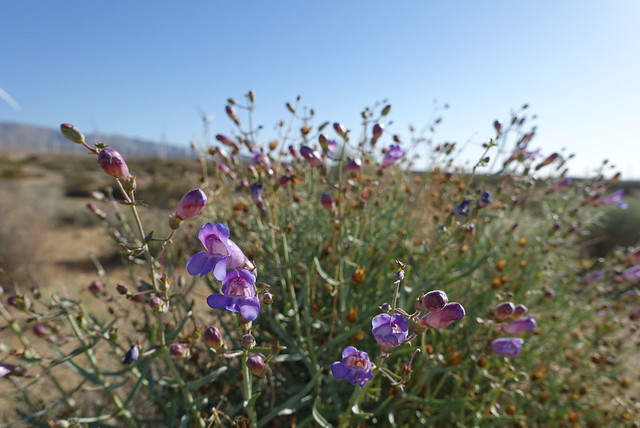 Right at the Cottonwood Creek bridge, I ran into Halfmile and Special K in an SUV. Special K is starting a section hike, and Halfmile had his iPad out and was mapping. We chatted a bit; it was good to meet them both and thank Halfmile for his app that I've been using quite a bit these days. I promised an update for the water report for Golden Oak Spring past Tehachapi; it's been cattle damaged and updates on its status have been sporadic. I'm planning on carrying 7 liters of water from Highway 58 north to Robin Bird Spring. I'm not thrilled about carrying that much weight, especially as the trail climbs up 3000 feet in the elevation as it leaves Highway 58... but there's not really another option. I'll also have 5 days of food, which is also heavy. With that spring likely out of commission, it's making a stop over for resupply in Lake Isabella pretty much mandatory; carrying eight days of food from Tehachapi to Kennedy Meadows plus seven liters of water is really just a lot of weight, and a break after five days of heavy carry will be definitely appreciated.

After saying goodbye to HM and Special K, I headed north on the PCT through the Iberdrola wind farm. There was just a little breeze, very few of the turbines were spinning, though occasionally I'd hear a faint clunk and see one go online and start up with a faint whirr. It was superfine hiking weather, temperatures in the low 60s, and I was eager to put miles in before it got hot and the wind picked up--there's a reason why I was walking through a wind farm, after all. 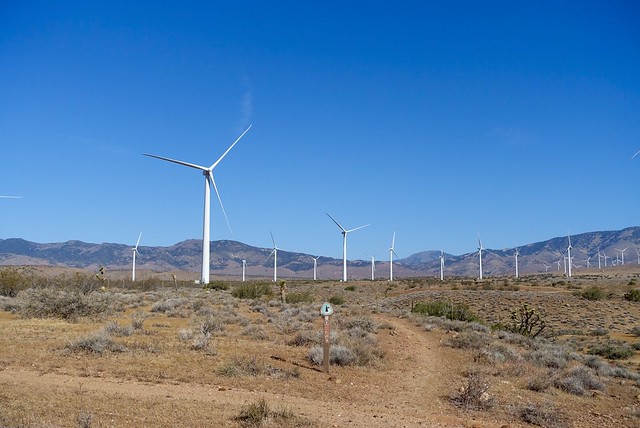 PCT through the wind farm, m535 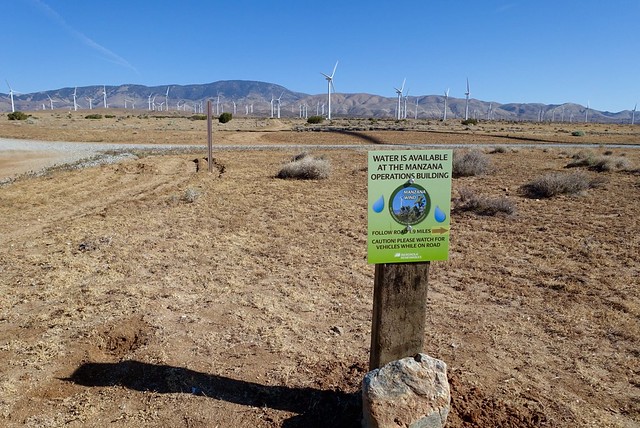 But the wind didn't pick up, just little puffs from the southeast, as the PCT followed an odd arrow-straight northerly to the east of some invisible boundary, marked maybe by an abandoned barb wire fence? 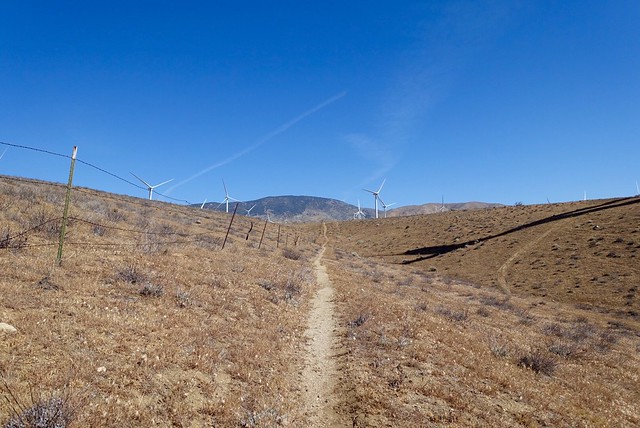 The scenery was pleasant with a big forested mountain ahead, and I knew the trail would eventually get up to those heights and then somehow wiggle around to the northeast in that slow snakey way I've grown accustomed to. I spotted a few solitary Kennedy mariposa lilies here and there, colored Caltrans orange. They're one of my favorite California wildflowers and I was happy to see them; they all were growing just a half inch off the ground. I wondered if that's because how they grew, or because for the past 150 years cattle have eliminated all the ones that grew taller--a variation of the 'tall poppy' syndrome. 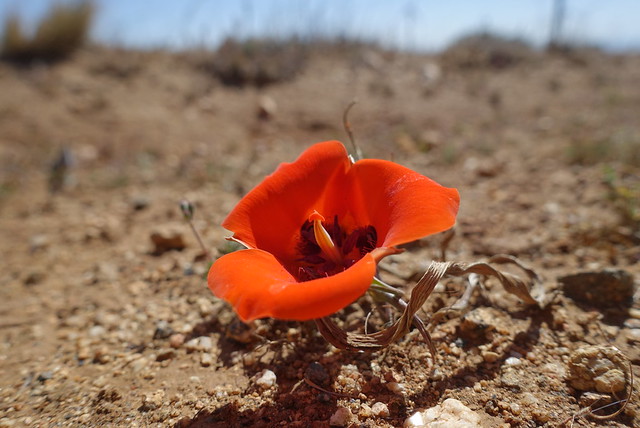 Whatever it was, there weren't any cattle to be seen at all, and just a couple of cow pies here. Fine by me, they can be such destructive beasts. 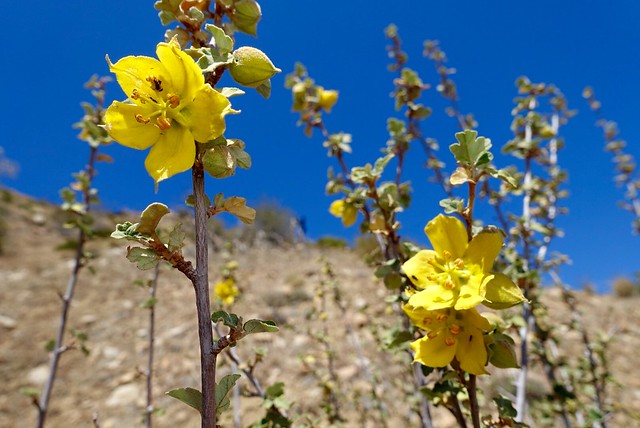 I was getting back into that flow, and the miles and hours just went by and I arrived at Tylerhorse Canyon to find a ten inch wide creeklet. I stepped across and made three and a half liters of water and rested a bit. Barista and Joko caught up as I was leaving and were talking about night hiking; I didn't want any part of that in these mountains and after last night's march through darkness. 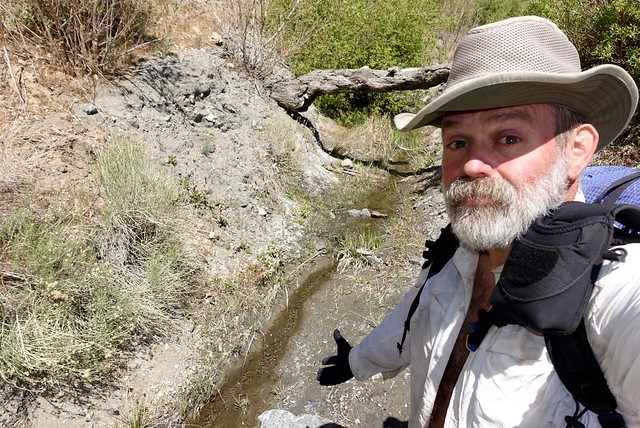 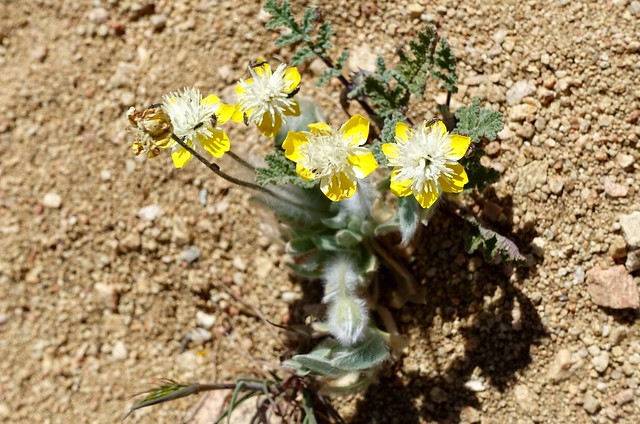 After Tylerhorse, the PCT climbed a bit, then plunged into a canyon and then back up the other side. Really? Again, I blame boundary lines. Or something. The trail went up and up, with fantastic views south, and crested around 6200 feet in what showed solid green on the topo, but was now a burnt out forest with a fair bit of downed wood across the trail--but that wasn't as difficult as finding the PCT amongst all the dirt bike tracks that laced the forest. Often, fresh dirt bike tracks obliterated any trail (and previous footprints I was following), or they'd verge off and get back on, or just keep on going straight through a switchback turn. There were quite a few new looking PCT signposts (with the "NO MOUNTAIN BIKES" square icon scratched through or just peeled away already), but not enough. I ended up pulling out the GPS a fair bit to figure out if I was on the 'real' PCT, or some imposter parallel track 30 feet to one side. I was glad I didn't do this in the dark either. 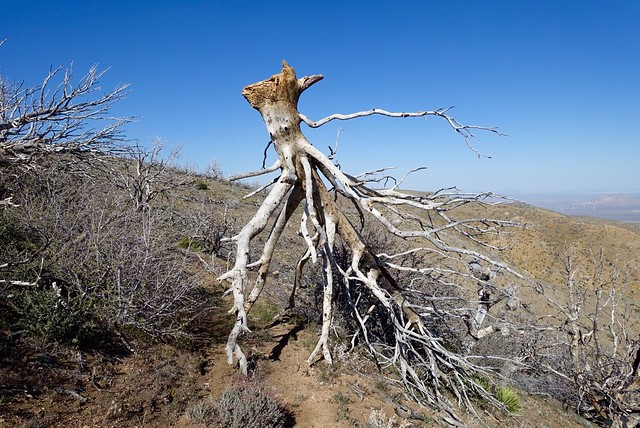 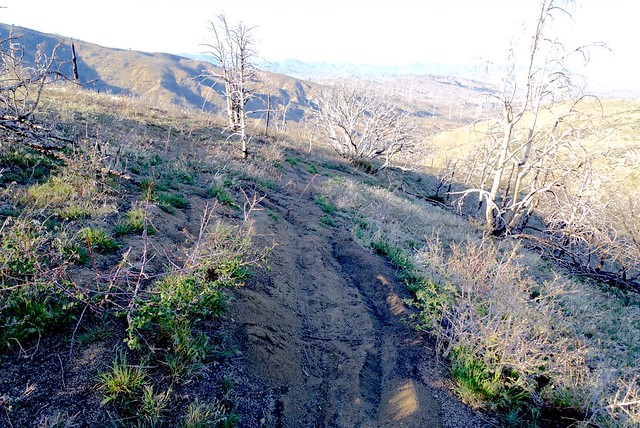 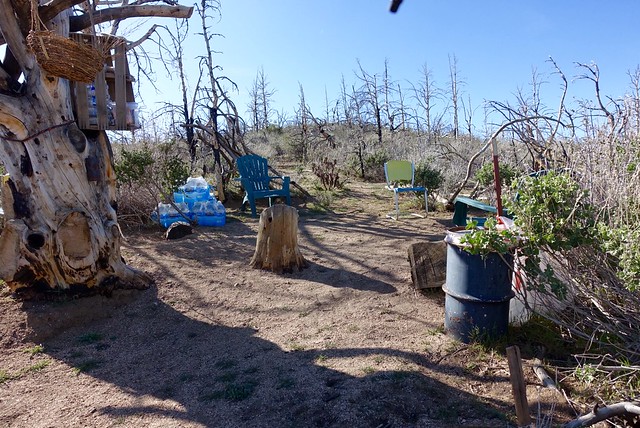 After those tedious miles, somewhere around mile 553 the burn area stopped, wildflowers grew, butterflies danced in the wind, and unicorns pranced. I could see the road far far in the distance, under dozens and dozens of wind turbines... and knew I would make it there right around darkness at 8pm. Ah well, might as well make the most of the day, so I snapped pics of wildflowers and turbines and had a fine walk down the hill. 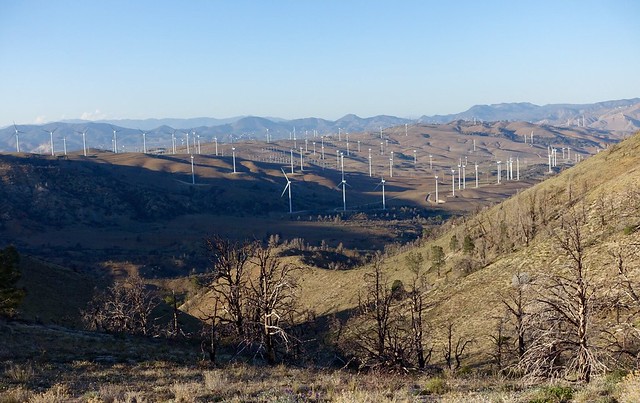 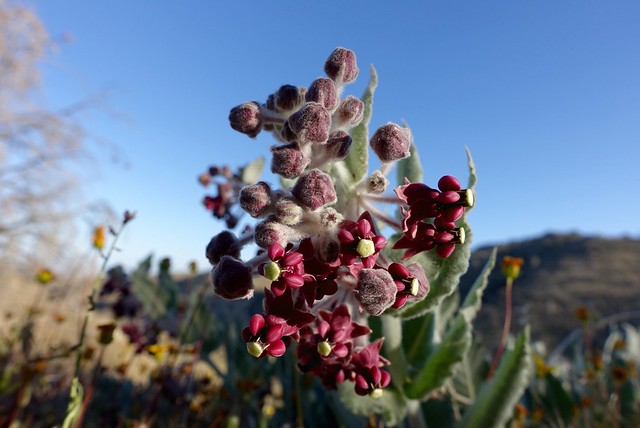 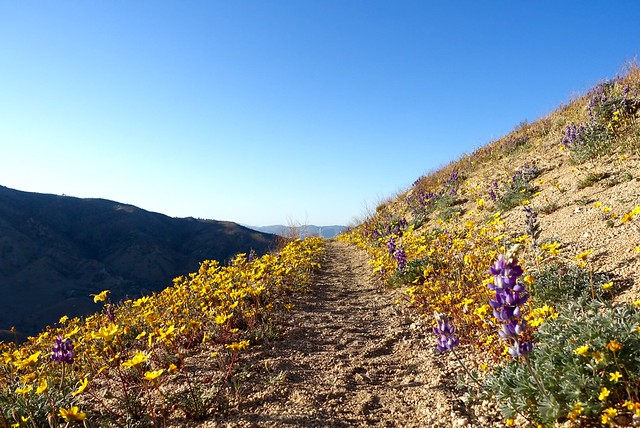 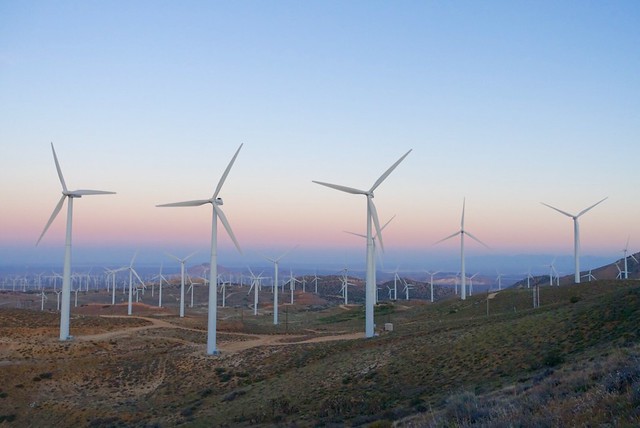 At the road it was pretty much dark. Would you pick up a hitchhiker with a big backpack on a lonely dark country road just after dusk? I didn't think so, so plan B was just to call the hotel I wanted to stay at and asked about rides into town; did they have a shuttle? Nope. I was ten miles out--maybe too far--but Tehachapi Taxi came out in twenty minutes and ferried me to the hotel, yay. It was a 24 mile hike today; I felt good at the end and even my right shin didn't bother me too much, but it does start to feel like I'm getting a shin splint in that leg (a unilateral shin splint, which is weird and odd.)

Tomorrow will be a big fat zero day, and I'll rest up. Plus my parents are passing through the area on a road trip of their own--so the three of us will meet up in the late afternoon at the hotel and catch up. That'll be enjoyable, and it'll be good to see them again.