dan.marmot.net
< PCT Day 18: Past Deep Creek to Mojave Dam The Weather: A Change in Plans >

Back in the groove. Great day walking through unexpectedly green landscape, with a nice motel room at the end.

Ah that was a much better night's sleep on that granite sand, a good solid warm 9 hours, and I woke up to the tail end of a lunar eclipse with the moon setting behind a mostly snowless Mt Baldy. 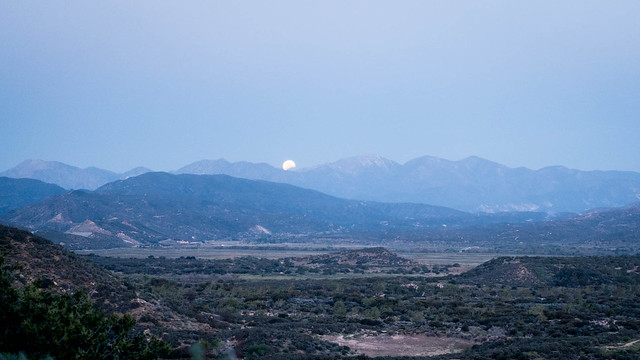 I didn't even care that the mattress deflated midway through the night, but I've gotta get it in the tub at the motel and discover where the leak is if I'm going to make it through the cold mountains to the west.

The weather has changed from a worry to just a concern, but that's more a adjustment in my mood than the forecast. I have decent cell coverage, and looked at the weather as I made coffee this morning--a late season Alaskan storm is predicted to bring 30mph winds and temperatures down to 20 and a few inches of snow, sometime when I'll be right around Wrightwood. I'm thinking I can stay in Wrightwood and wait it out, or get a ride down Highway 2 to the last PCT crossing and head downhill to Acton. No, scratch that, Highway 2 is closed from a rockslide, so getting west from Wrightwood if it's really cold will be a puzzle. Something to monitor.

I was up and going just after 7; it's literally a marathon day as I'll be hiking some 26 miles, the most I've done. There's not much elevation change for those miles, the trail just flutters around 3500 feet for most of the way, and the trail has been well maintained. I'm not too concerned about anything but making it to the hotel at sunset.

I pass a couple section hikers, then Days Late who's peeping out of his tent, and I say hello briefly. Getting up this early has one big advantage; the sun is very low and the trail is in the shade. It's also much more lush than I expected, I was thinking today was going to be a drab march through waist-high chamise chaparral, but the trail planners smartly put the trail on a north-facing slope, and in this season it was covered with lots of greenery over my head as it ducked in and out of gullies lined with sycamores. 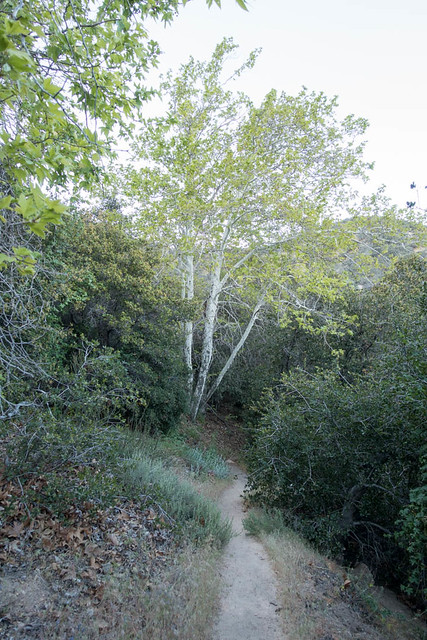 By mid-morning I was crossing the terminus of mysterious highway 173, and a few miles later I was at the base of the Cedar Springs (Silverwood) Dam. The trail was routed through a work yard, with great huge big steel pipes, rusting away. I took some fun pictures.

After a wrong detour up a 'paved road' I crossed the bridge across the spillway outlet, passed a 'siphon powerplant', whatever that it, and climbed up to the lake.

Seeing that lake suddenly come into view was a very "whoa" experience. The far side was green with oaks and pines, and the lake was a wonderful blue color and quite full. People were jet-skiing and fishing on the lake on this mild day, it felt like early summer. As the trail contoured around to the picnic areas on the western side of the lake, I caught a whiff of BBQ sauce on the wind blowing across the lake--summer indeed, on Easter weekend!

I descended down to the Cleghorn Picnic Area and found a big shade pavilion with all the necessities for a great break: shade, picnic tables, water faucet, even a trash can and concrete underneath so I can give my feet a breather. I filled up my water for the remaining 15 miles, then rummaged through my pack hunting trash and sorting out how much food I had left.

Speaking of food, a brief side note: that Knorr Parmesan Stuff is super yummy. The Kind Maple Bars are too crumbly (and too low in calories for their bulkiness). Fritos are becoming a staple, a 9 ounce bag is 1600 calories which is great. This is just for future reference. 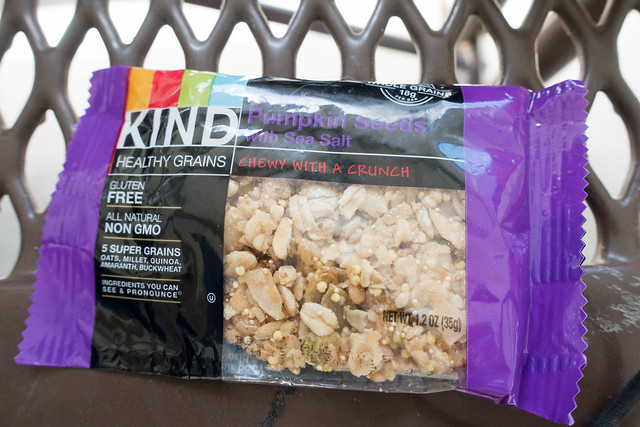 Leaving Silverwood, the PCT heads under Highway 138, takes a steep and windy climb, then again does that contouring along a north-facing slope, mostly shaded. Again, it was green and pretty with flowers and such. 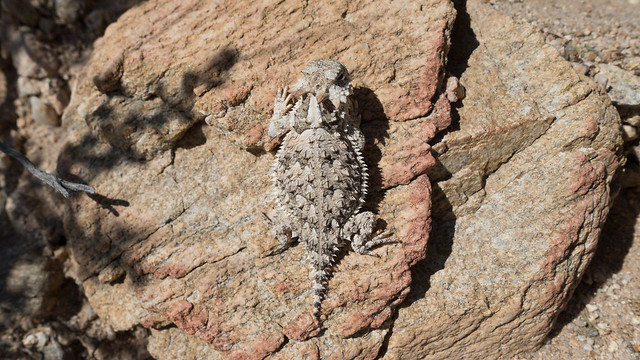 After several miles, the trail ducks under some power pylons, and descends down a steep windy sandy ridge to the Cajon Pass. The fields were densely filled with brodiaea, I've never seen so many, and it was wonderful in the slanting light just before sunset. I really like that time of day for hiking and taking pictures.

The trail got to I-15 through a pretty canyon--you really couldn't see or hear the freeway until you were right on it. I took a right and walked to McDonald's, ordered a Big Mac and fries and a Sprite. I'm still not feeling the hungry, but that Big Mac disappeared in five bites and about as many seconds, the fries took slightly longer. 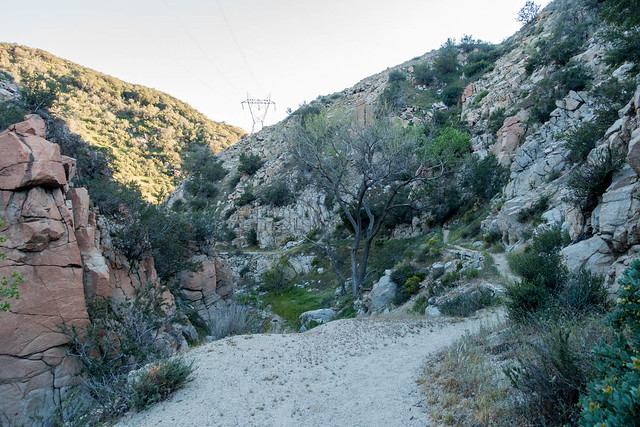 I walked up and over I-15 to the Best Western and got a room, then soaked a bit in the hot tub. 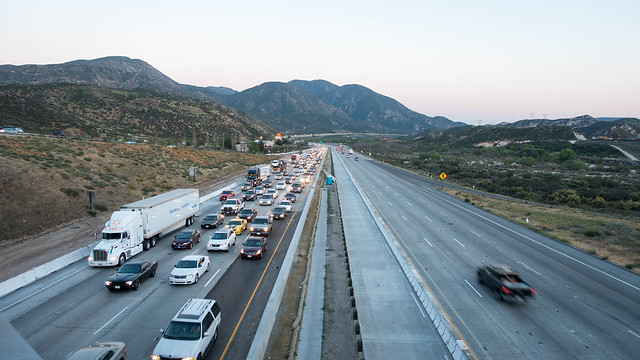 I noticed eTrain had signed the hiker registry, so I left a message to see if he was interested in chatting. He came out to the hot tub and we talked about the weather; he's going to head up to Wrightwood early in the morning and wait for the storm to pass. That's definitely my thinking right now--it's two days of steep uphill to Wrightwood, so Monday night is definitely in a motel there. However... if the snow/wind/cold don't finish until late Wednesday that means back on the trail on Thursday after three nights motel, and trailfinding through a few inches of snow in 35 degree temps. I don't have the clothes for that. I'm really happy that today was a wonderful day, and the moodiness of yesterday is behind me.

< PCT Day 18: Past Deep Creek to Mojave Dam The Weather: A Change in Plans >