Today it was all about downhill hiking. I worried that there would be more snow fields to cross--there weren't--and I was worried I wouldn't have enough water when it got hot and probably windy. 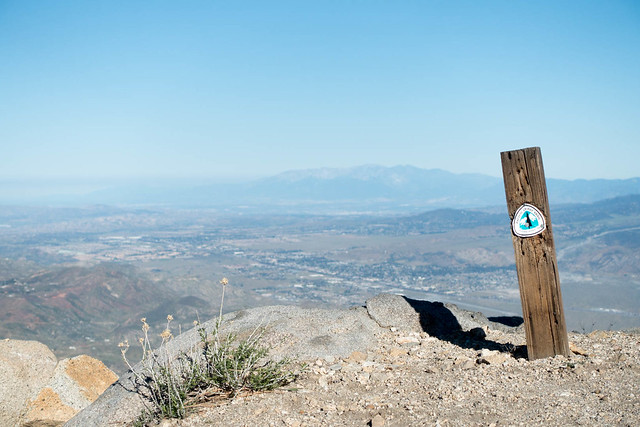 Well that was an uneventful evening. No wind kicking up in the middle of the night. Not even frosty. Just pleasantly cool; I skipped making oatmeal (it takes water) and munched Yet Another Clif Bar, and wanted to get going. I was meeting The Other Half, Chris, down at where the PCT crosses I-10 sometime around 5:30 or 6. 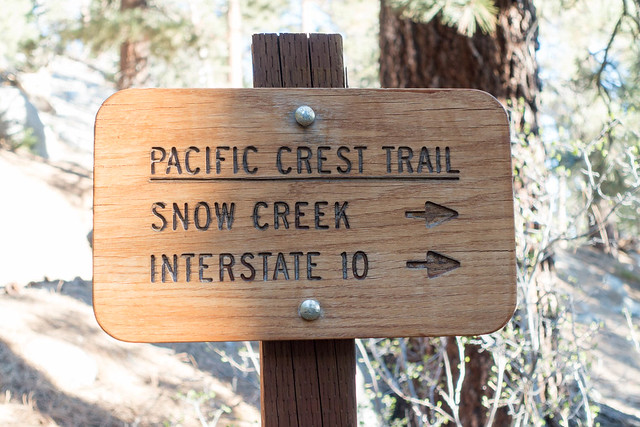 I pointed BigDog down the trail (my pack was covering the signpost) around 7, and let things dry out a bit; it was in the low 40s and dry... and then I caught myself a few minutes later saying "it's going to be 95 degrees soon and 6% humidity, why bother drying things now?" So I shoved everything in my sack and measured out my water again to see how much I'd lost with the broken Platypus bag.

And yes, it looks like I had 3.5 liters to go 14 miles to the spigot at the bottom of the hill. Hm. That's kind of right on my "1 liter per 4 miles" consumption rate for warm weather, and since it's cold up top here and hot down below I'd better make that work. I used the 2 liters in the Platypus hydration tube first, and figured at the 10 mile mark I should be sucking it dry, accounting for the cooler temps at the higher elevations. Then I can switch to the SmartWater 1.5L bottle for the rest of the descent. That worked well. 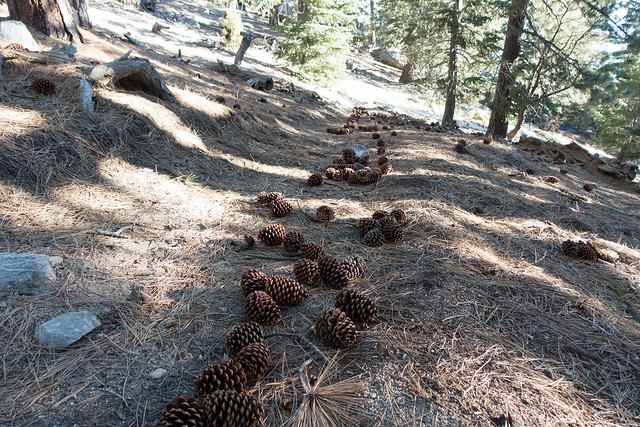 The trail was super-pleasant going down at first, despite Yet More Pinecones, with many wide spots to camp along the flattened spur ridge, and no snow. It was easy going and cool with the temperatures in the 50s; I passed BigDog just before a burn area hiding in the cool of some boulders. As I descended down from the 7600' elevation of Fuller Ridge campground, it got warmer and warmer though; passing 6000 feet the temperature was already 70 degrees. There were really good views off to the west and northwest; I couldn't quite see downtown LA but it was out there; I could easily see San Gorgonio and Mt Baldy.

The wildflowers were out too, particularly the bush poppies. Lots of interesting colors there around mile 193 to 194. 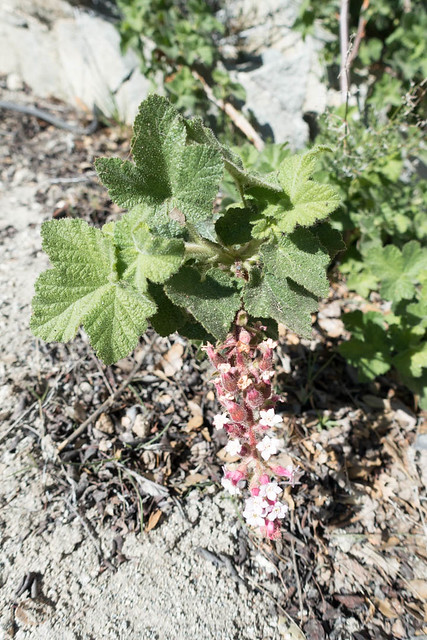 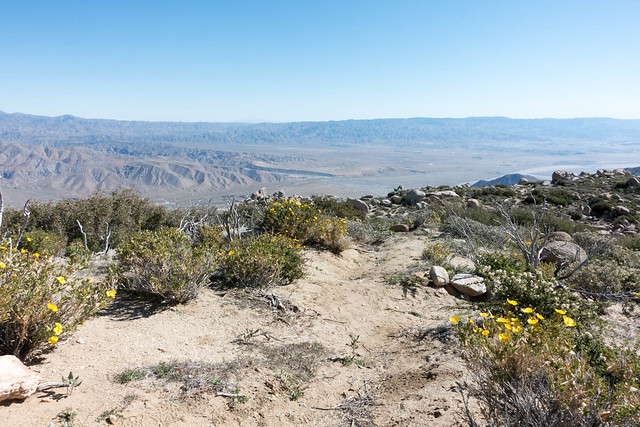 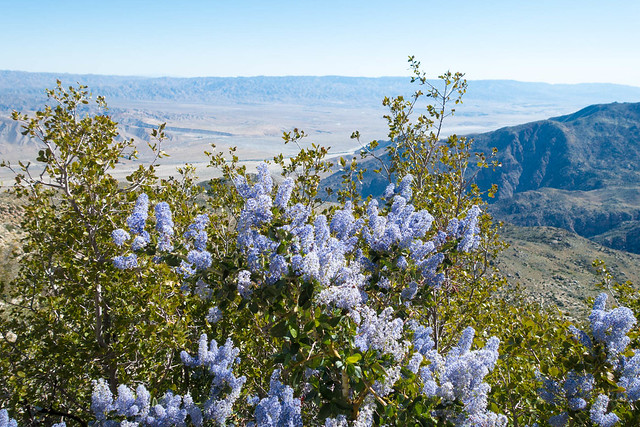 Then at mile 195, it seemed like trail maintenance stopped. Lots of narrow squeezing through scrub oak. I was glad I was wearing long pants, and felt sorry for the hikers in shorts. A lot of the railroad tie waterbars had been burned or washed away, and the trail resembled more a goat track than anything, with the post-wildfire erosion really washing away the bed of the trail, sometimes to the point of me questioning "is this really the trail?" There'd be good spots, then horrible spots. The only saving factor was staring at wildflowers, wondering what this flower or that was, and enjoying the rapid change of plant communities from the conifer belt up top through the pine-oak woodlands into chaparral, then into desert transitional plants and finally low desert vegetation. 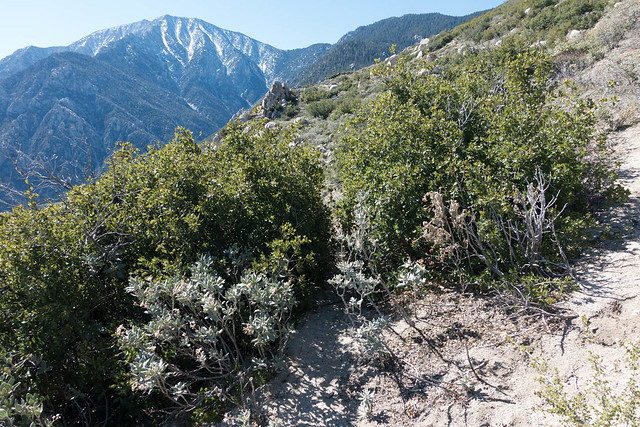 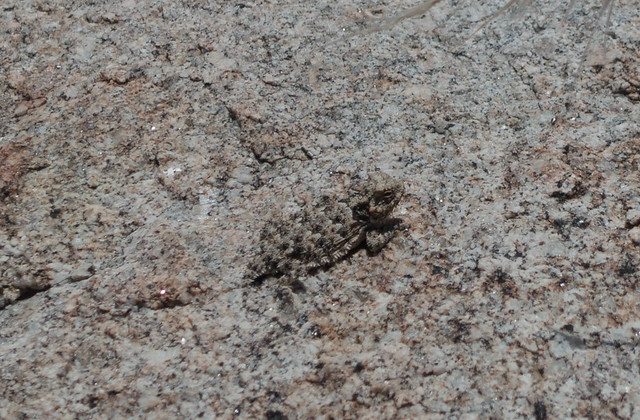 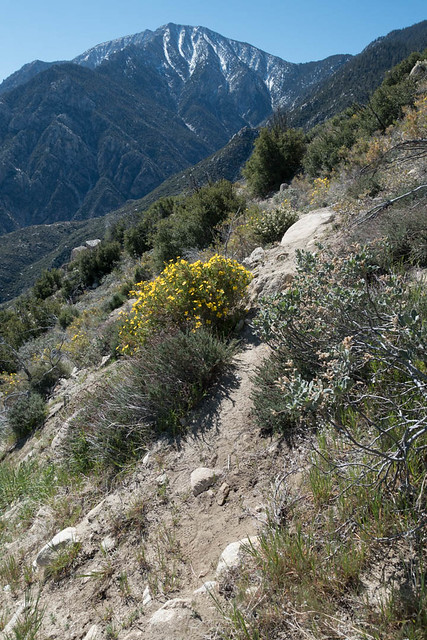 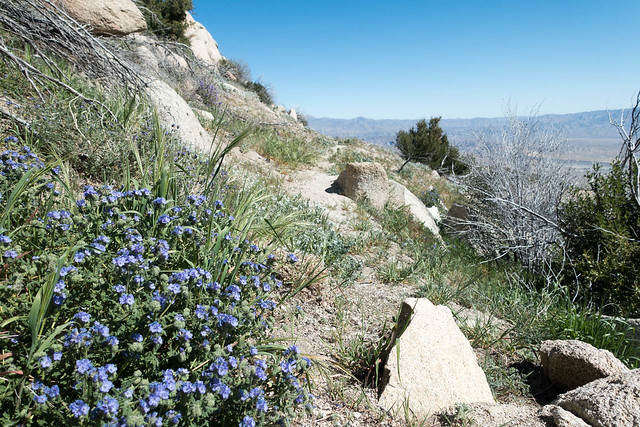 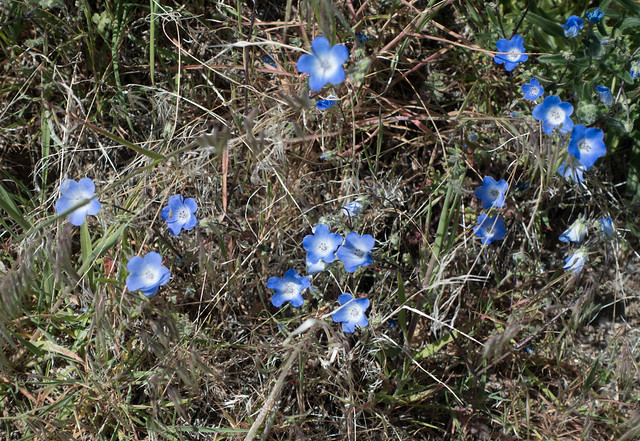 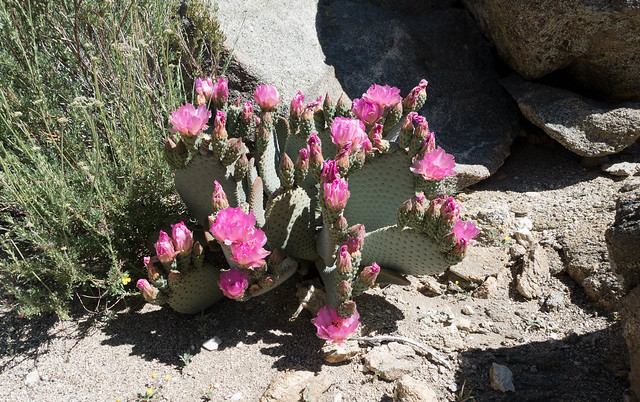 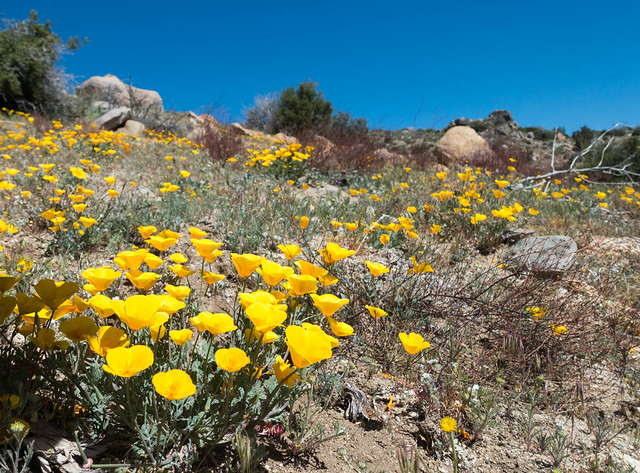 Around mile 198 I stopped about ten feet short when I spotted a snake ambling across the trail. It was small, maybe 18 inches long, so I thought it was either a baby rattlesnake or some other snake... and I was doubly wrong. It was heading for some shade, paying no attention to me, and as it got off the trail I noticed the four or five rattles on the end of the tail. Uh oh. Rattler #2. Still, it was being really mellow, and I had some uphill side so I gave it a nice 10 foot buffer and took a few pictures. It never noticed me, and later as I looked through the snake picture guide at California Herps I found out what it was: a Colorado Desert Sidewinder, which is a variety of rattlesnake that's quite a bit shorter than what I'm used to seeing along the California coast. 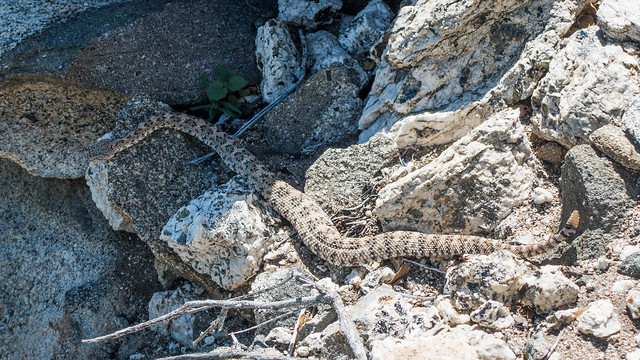 More plants and flowers followed--a California thistle, a blooming beargrass, a brittlebush--and then I spotted a nice shady boulder to sit under. An odd lizard with black collar markings crossed my path that I haven't seen before; it's a Mearns Rock Lizard. At mile 202 the bushwacking stopped too; the trail had received some recent attention (thank you trail crew) and it was fast sailing downhill. 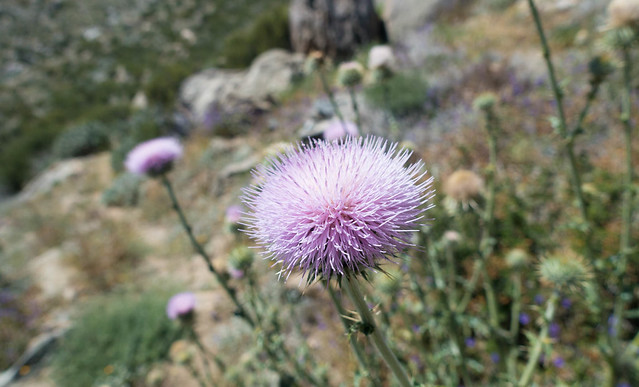 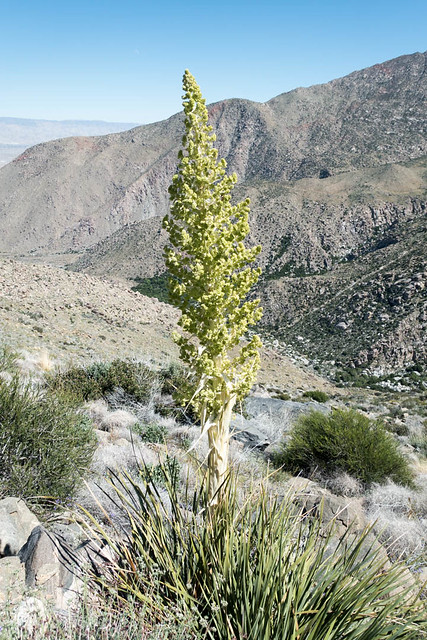 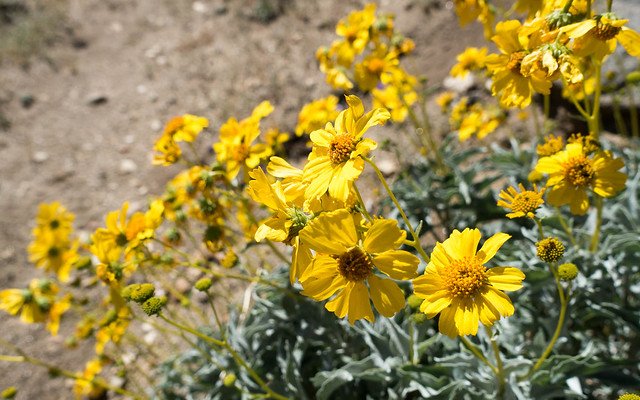 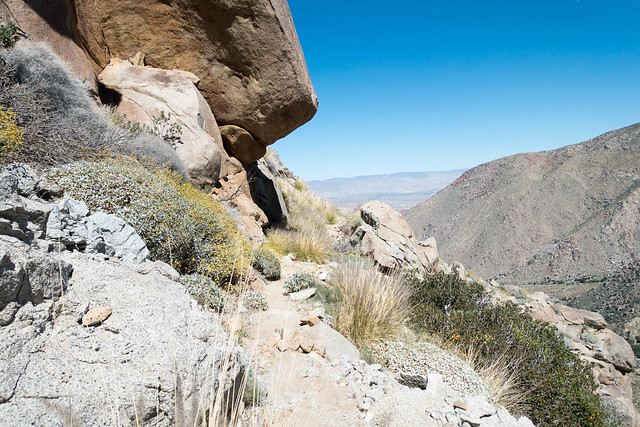 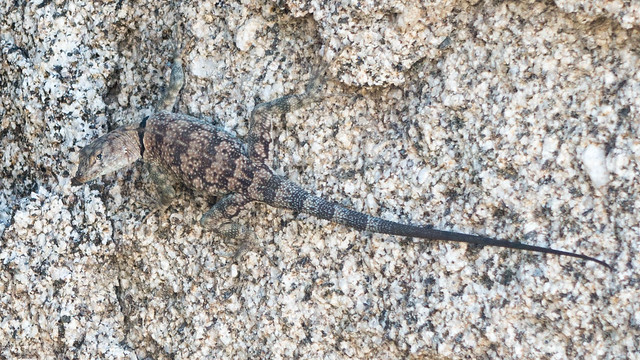 And it was almost too fast--right at mile 204 I came across yet another rattlesnake, sprawled on the trail. This one definitely noticed me, and it speedily took off down the trail, rattled quite a bit, and wedged itself in a rock crevice next to the trail waiting for me to go away and not bother it. I tried moving towards it a foot or two (I was a good 20 feet away) but when I did it got angry and rattled more, then stopped rattling when I retreating. Sigh. Do I wait it out, or go around? I played Dumb Tourist and decided to make a video and wait it out. I'll post it if I can figure out how, but it really didn't want to move.

So after waiting five minutes I spotted a detour and scrambled up and over the rattlesnake. It never moved, it wanted me to make the move I figure. I checked my water--a bit under a liter left--and drank a big old swig. I can make it the two miles down to the spigot, no problem. That spigot was wonderful. It's like someone just magically plopped down a drinking fountain in the middle of the desert. I wasn't sure if it was treated water, but uphill there was a large water tank, and the pipe it was attached to looked like it serviced small the Snow Creek community, so I gave it a taste. Vaguely chlorinated tap water is what it tasted like, so I drank a liter, paused, then drank another. The temperature had heated up to 95 degrees, and I was very thankful once again to be hiking under the umbrella for most of the day.

Thank you, Desert Water Agency, for your delicious water. 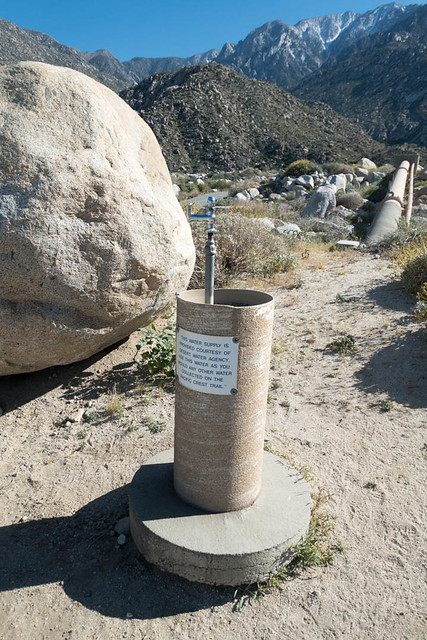 From there, it was a painful half mile on a downhill paved road, past the community of Snow Creek, then maybe 3 1/2 miles through the sandy creosote flats the dry river wash to the I-10 underpass. 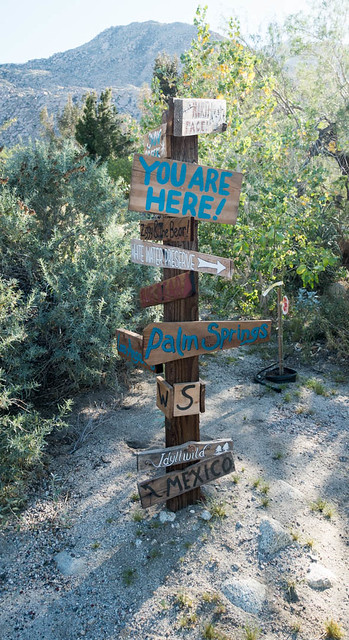 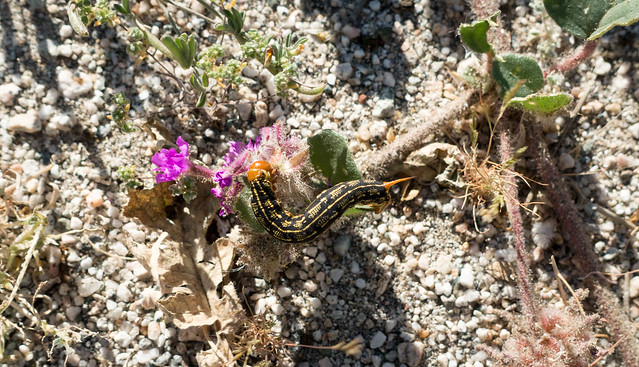 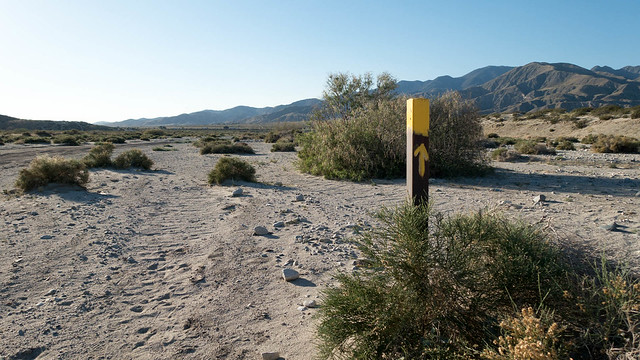 Chris was waiting, took a groovy timelapse movie, and after signing a trail register we both scooted to the very close but decidedly non-trail town of Palm Springs, just ten minutes drive from the PCT. I really need a day of rest, and some fresh clothes would be great too.

And yes, after checking in at the Motel 6, we drove the two blocks to Rio Azul, and I certainly got my margarita on. Yay! Looking forward to tomorrow's day of doing nothing but food shopping, repacking, sending a few more things home, and a hot tub. 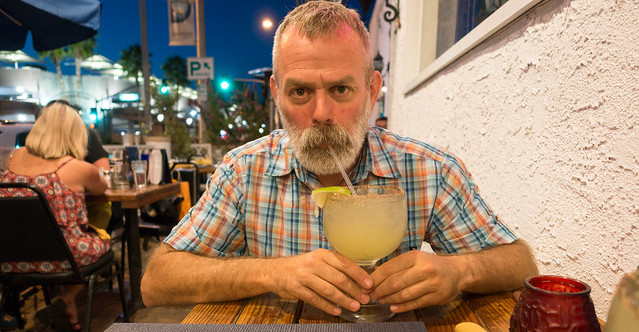