Yay, finally got on the trail just after sunrise (well, 7:30 is close enough)... and enjoyed the six miles up to Mt Laguna. First there were large "meadows" which were really rose thickets, surrounded by black oaks, then actual pine trees. 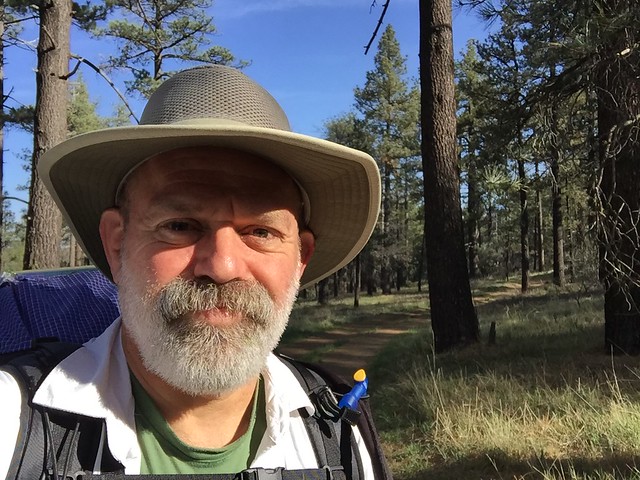 I caught up with the Scarlet Grouse (Suzanne), Glen, and Howdy at the Pine Manor Cafe, where we enjoyed hot coffee and fritattas. I took my time and charged my iPhone--note to self, start immediately looking for outlets when you hit a cafe. I wasted valuable charging time (in fact, I think I'll swap my iPhone charger for the 10W iPad charger, just to make more trail time and less time having that fourth cup of coffee.)

Just down the road was Dave's at Laguna Sports and Supply, an outfitter I'd stopped in a few times, and the Grouse and Glen were just pushing off after chatting with what looked like another actual thru-hiker, named Pillsbury. Yep, she was a thru-hiker allright, but she did the PCT last year, and after some cajoling I gave in and said "sure, let's see how I can lighten my load". I ended up saving about three and a half pounds--some extra clothes and socks, some extra stuff sacks, a footprint for the tent, and I swapped out my JetBoil for a lighter Olicamp stove, and had a good discussion about stoves and cooking. Her approach to cooking is a bit similar to mine: you cook water, then pour it in whatever to make your meal. The stove is maybe six or eight ounces lighter than the Jetboil too. 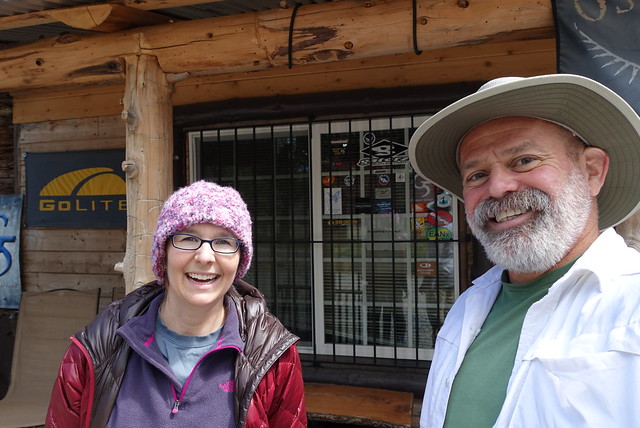 PCT Day 3. The great Pillsbury and me.

I also bought a drysack for my sleeping bag; I was going to do that eventually but this seemed like a fine time. I thanked Pillsbury, headed on out. Conveniently, the post office is just a two minute walk up the trail, the helpful woman figured out what the best way was to send it down the hill to home and I found out how much I saved: 3.6 pounds, woo.

So back on the trail, and I knew it was going to be pleasant walking, right at 6000 feet give or take, rather rolling, nothing like the steady climb from yesterday afternoon. Sadly, just after Mt Laguna the trail veered more towards the desert... which isn't nearly as scenic as the trail around Big Laguna Lake, then out at Penny Pines. Ah well. There were a few wildflowers, but I was interested in making time; I've walked this section of the trail before. 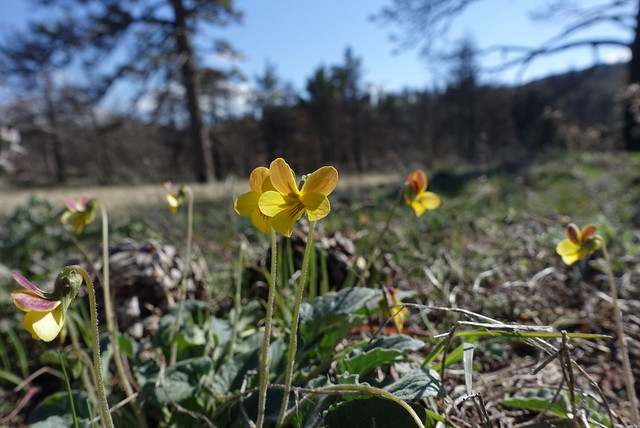 Now, I did stop by and get 4 liters of water at Penny Pines. I did not want to delay myself with filtering water at Pioneer Mail Picnic area; I looked at my watch and was getting a bit worried about finding camp while there was still daylight. Should I camp on the old roadbed past Pioneer Mail? See if I can find a place on the cliffside past mile 53 (for a 17+ mile day)? There aren't any camnpsites listed on Halfmile's or Guthook's maps before mile 56, but there could be some, maybe even out of the wind. And will I have enough daylight to make it to mile 56, without falling off the cliff?

At Pioneer Mail, I ran across a bit of trail magic, around 6:15pm, yay, though I didn't need water (ugh, why did I carry 4 liters? Why? Because don't depend on trail caches). There were some batteries in there that I did take in case I needed them for my headlamp. I plowed ahead up the old roadbed--to the east side is a 5000 foot high cliff, the west side is crumbly rocks that have collapsed onto the road. It didn't look very attractive. I pulled out my headlamp, and even checked the moon phase (it's a new moon tonight, so the stars should look impressive, but not exactly good for finding a place anything more than 5 meters off the trail with a headlamp.)

Past very breezy Kwamii (sp?) point, I know the trail winds its way along a steep slope--the trail is mostly level, but there are no campsites except the trail itself. Hm. Finally, there was a little spot where the wind died down to nothing... and there were some possible level places. I found one right at sunset, threw up the tent, and was really happy to have a place out of the wind. 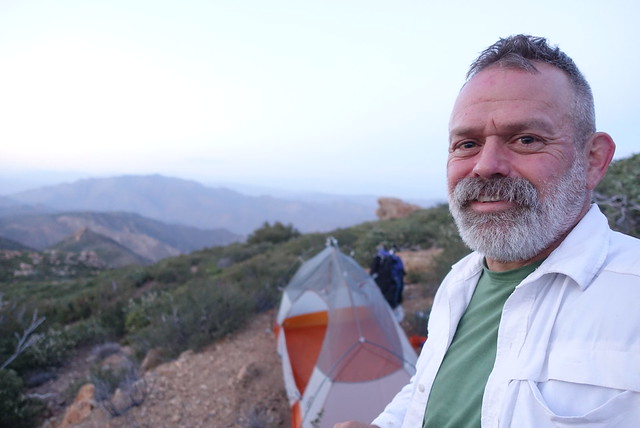 I celebrated by making a Knorr Pasta Side dinner with my new stove. Tasty.

I'll also say I'm a bit surprised that it's now Day 3 and I've only met two others actually thru-hiking' the PCT--the Grouse and Glen. I haven't overtaken anyone, or been passed by anyone. It's kinda nice being out here and feeling all self-reliant and all, and I'm fine with being alone... it's kinda nice to get my own feet under me these first few days. Speaking of which, the knee problem is gone, there's no plantar fasciitis at all these last tree days. Truth be told, the part of me that's most sore is my outer glutes. Yeah, go figure. I'm feeling pretty good, and a bit surprised that I don't have blisters or foot woes or even hot spots around my toes. (I did buy some new Injinji toe socks in Mt Laguna, the running ones work great... and I sent home a couple of pair of my DarnTough socks.) I feel fortunate in this regard, I know others haven't had the same experience.

Tomorrow it's downhill some 17 miles to Rodriguez Fire Tank. Then maybe Julian on Saturday? Maybe not--the next stop would be 3rd Gate Cache at mile 91, then Warner Springs at mile 109. These first few days are pretty good at having break points right around 17 to 19 miles, which I like.